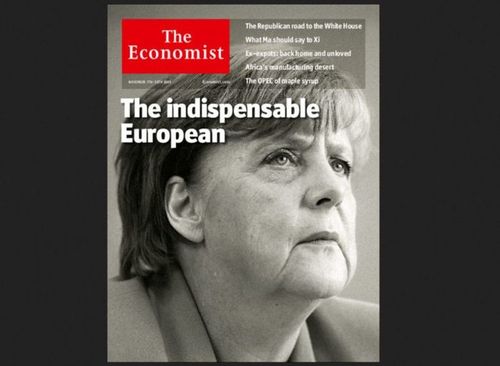 After you're through watching that video With Open Gates that James posted, take a stroll on the globalist side of the street to see how it looks to them.

There is of course no better guide to the globalist mentality than The Economist.

This week they have surpassed themselves.  The cover story is a celebration of Angela "Mutti" Merkel, the lady who opened the aforementioned gates as wide as they will go.

You think Mutti is suffering from a terminal—for her country—case of pathological altruism?  I think the same; but to The Economist, she's a heroine, a moral colossus towering over lesser leaders.

LOOK around Europe, and one leader stands above all the rest: Angela Merkel.  In France François Hollande has given up the pretence that his country leads the continent .... David Cameron, triumphantly re-elected, is turning Britain into little England. Matteo Renzi is preoccupied with Italy’s comatose economy. [The Indispensable European; The Economist, November 7th 2015.]

As is always the case with great leaders, weaker spirits fail to appreciate Mutti's stature.

Ironically it is boldness, not timidity, that has brought Mrs Merkel the greatest challenge of her time in office. Her staunch refusal to place an upper limit on the number of refugees that Germany can absorb has caused growing consternation at home and criticism abroad. As German municipalities protest, her political allies are denouncing her and eastern European countries are accusing her of “moral imperialism”....

The naysayers are wrong to suggest she has lost her way on migration. Quite the opposite. During the crisis the Lutheran pastor’s daughter has found a forceful political and moral calling. Mrs Merkel did not cause the onrush of migrants, as her critics maintain. The migrants were coming anyway: she acted to avert a humanitarian disaster. Fences will not hold back the flow....

As Radio Derb noted last week: "There is.... a school of immigration romantics—Tamar Jacoby is representative—who argue that mass Third World immigration is like the weather: beyond the power of human beings to control. It's bound to happen! Just get used to it! Nothing we can do!"

Mrs Merkel can neither stop the wars that drive people out of their homes nor set the policies of the countries they pass through. Her critics offer no plausible alternative. Short of overturning international and European law, and watching refugees drown or die of exposure, EU countries must process the claims of asylum-seekers. The question is: will the process be orderly or chaotic?

Those extracts are from the warm-up editorial at the front of the magazine.  For the full emetic gush, read the actual cover article, "The Chancellor's Crucible," in the main body of the magazine.

That article closes on the same weird note of limp passivity:

Bernd Ulrich, a German pundit, puts it nicely: Mrs Merkel “did not make history in early September, the refugees did. She only acknowledged history.”

Then we get another favorite trope of the open-borders globalists: That border fences countries build to keep out foreign invaders are just like the Berlin Wall!

But her legacy will be determined by whether she can hold together Germany and the EU as they absorb this shock. For a woman who spent half her life behind the intra-German wall, a Europe of fences and barbed wire would be a failure.

And then a closing flourish celebrating the EU and its values:

Keeping Germany open and tolerant inside an EU true to its humanitarian founding values is not her policy. It is her mission.

Values, schmalues: The EU was never anything but a banker's ramp.  The sooner it is smashed to pieces, the better for Western civilization.  If the Islamic and African hordes accomplish that, they will at least have served some positive historical purpose.

Camp Of The SaintsECONOMIST-Watch
<< Previous
Next >>
LATEST