Obama's Amnesty By Decree: Has Sheldon Adelson Already Paid The GOP Leadership To Take A Dive? 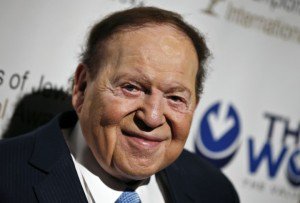 Back in June I asked Is Amnesty “Dead” Because Congressional GOP Agreed To Connive At Administrative Amnesty? By now is absolutely clear that as far as the GOP Leadership at least is concerned the answer is YES!.

If the funding bill is approved without curbs, Republicans would not be able to stop Obama’s work permits because he could use his veto power to kill subsequent legislative curbs passed by Congress.

So far, the GOP leaders and the appropriations committee are ignoring the call for spending curbs.

...a key moment of the meeting, left out from those accounts, was unveiled by Boehner himself in an exuberant moment of boasting in a closed-door meeting with GOP colleagues minutes ago.

Boehner recalled telling Obama, “Mr. President, just give us one more chance to do this the right way. If we can't, then do what you gotta do.”

Boehner: I Begged Obama For Another Shot At Amnesty by Jonathan Strong Breitbart.com 13 Nov 2013. VDARE.com emphasis.

Unsurprisingly, Boehner’s minions are trying to walk back this story, but Daniel Horowitz, in a commendable post at Conservative Review Boehner Promises Amnesty Bill, then Reelected Speaker - writes

I have this quote mentioned by Breitbart confirmed by several people in the room when Boehner said it.

Read that again.  Boehner told the GOP conference behind closed doors that he told Obama he has the green light to shred our constitution and destroy our sovereignty if Republicans don’t do it through regular order.

What explains this stampede to capitulate immediately after a dramatic election victory which, as Mickey Kaus has pointed out, can reasonably be construed as a decisive repudiation of Amnesty/Immigration Acceleration? (Particularly when the extraordinary Oregon driver’s license vote is included.)

And when the actual policy involved is secondary to the general Constitutional issue as I argued in 2012 in Obama's Immigration Coup: If GOP Afraid To Defend Americans, How About Defending The Constitution?

The only plausible answer: the GOP leadership has ADD (Adelson Dollar Disorder).

As it happens, this evil man just threw another pro-Amnesty tantrum:

The Washington Post reports that Adelson who spent nearly $100 million in 2012 and will likely spend a hefty sum in the 2016 GOP presidential primary "upbraided many in the GOP for their opposition to legalizing millions" of illegal immigrants. He reportedly said that without a "comprehensive overhaul" that would legalize all of the country's illegal immigrants, the nation would not be "the America that I’m proud to live in."

Adelson made his remarks while addressing the Israeli American Council (IAC) in Washington, D.C.

Adelson went public with his Amnesty enthusiasm in a pair of Wall Street Journal advertorials at the end of 2012, but even before that his malign influence was plain as I noted during the election: Has Romney Sold Immigration Policy To Sheldon Adelson? And it has been painfully obvious during the 113th Congress when Boehner & Co spurned their base on the Dreamer Amnesty and Syrian intervention, both matters where Adelson money was deployed.

The problem for America is that, outside of union-busting, Adelson is a conventional Leftist—as even Harry Reid has certified. His Amnesty/Immigration surge enthusiasm is probably visceral: certainly concern for fellow-Americans does not appear to register.

And he is prepared to spend without scruple. He has just purchased the defeat of medical marijuana in Florida and as I noted in Diagnosis: South Carolina GOP Has Terminal ADD (Adelson Dollar Disorder) his crudely selfish spending to block on line gambling that might erode the profitability of his Casinos is functioning as a kind of political barium meal test – vividly revealing the cancerous way how his money (and that of those like him) is metastasizing into a lethal threat to American political health.   Adelson has a record of direct application of money to business problems too.

The Daily Forward has just noted Sheldon Adelson's Dismissal of Israeli Democracy Draws Silence From Groups He Backs By Josh Nathan-Kazis November 12 2014. If Adelson feels this was about a country he unquestionably loves why should he feel differently about a country he just lives in?

New planets, I understand, have regularly been discovered by tracking deviations from predictable of the orbits of known ones. Contemplating the extreme deviation of the GOP Leadership from the pattern that the 2014 election should have caused, and the otherwise bizarre abandonment of strong negotiating assets, only one question remains:

HOW MUCH HAVE THEY BEEN PAID?