Is Amnesty "Dead" Because Congressional GOP Agreed To Connive At Administrative Amnesty? 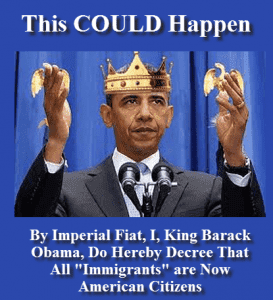 The two-year attempt to push immigration reform through Congress is effectively dead and unlikely to be revived until after President Obama leaves office, numerous lawmakers and advocates on both sides of the issue said this week.

This is very nice of course, and a tremendous credit to the Patriotic grassroots and to some (mostly invisible) brave men in Congress.

But is it true? Alas, I think the answer was supplied in Illegal Immigration: The Strange Omission from Boehner’s Lawsuit Against Obama Conservative HQ  6/27/2014. This notes that in the Speaker’s discussion of his proposed lawsuit against Obama’s rule by decree

…there was a strange omission... nowhere is Obama’s lawless failure to enforce our immigration or border security laws mentioned, which is arguably the most egregious example of Obama’s lawlessness

We think a general lawsuit against Obama for his lawless behavior has little chance of success in large measure because the Constitution sets forth another remedy against a President and subordinate officials who fail to faithfully execute their constitutional responsibilities: impeachment….

...what Boehner proposes is not a strategy to force Obama to enforce the laws Congress passes or to follow the Constitution. It is a feckless political ploy that picks and chooses a few issues to make it look like Boehner and House Republicans are doing something about Obama’s lawlessness, when the real remedy is to impeach Obama, Holder, DHS Secretary Jeh Johnson or any of the other federal officials who have been complicit in the execution of Obama’s policy of lawlessly refusing to faithfully execute the laws Congress passes.

That the GOP House Leadership is still totally controlled by the Treason Lobby was despite the Cantor demise was conclusively proved by the hurried election of their servant Kevin McCarthy as leader with only nominal (probably fraudulent) opposition. So have they really given up?

I think the answer is clear: the plan is to connive at an Obamacrat Administrative Amnesty. The correct response to this despotism is impeachment, as VDARE.com's James Fulford immediately pointed out. Boehner has been assigned the task of heading that off. Amnesty/Immigration Surge remains centrally on the agenda.