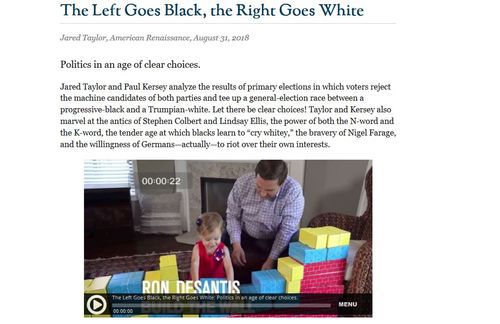 Jared Taylor And Paul Kersey Talk About The Democrats Becoming The Black Party, As Conservatives (FINALLY) Turn To The Sailer Strategy

In The Left Goes Black, the Right Goes White, American Renaissance editor Jared Taylor and Paul Kersey talk about "Politics in an age of clear choices." In 2008, Steve Sailer suggested Republicans try rebranding Democrats as "The Black Party". (There are not actually that many black voters  in America.) Since then, Democrats have been gleefully doing it to themselves. The problem: Republican  elites existential horror at being "The White Party". But Republicans seem to be getting over it.

Jared Taylor and Paul Kersey analyze the results of primary elections in which voters reject the machine candidates of both parties and tee up a general-election race between a progressive-black and a Trumpian-white. Let there be clear choices! Taylor and Kersey also marvel at the antics of Stephen Colbert and Lindsay Ellis, the power of both the N-word and the K-word, the tender age at which blacks learn to “cry whitey,” the bravery of Nigel Farage, and the willingness of Germans—actually—to riot over their own interests.