Phyllis Schlafly’s Dark Prophecy—Demographics Are Destiny, Even in GA-6. The Only Answer: An Immigration Moratorium

Establishment GOP candidate Karen Handel reportedly could lose to Democrat Jon Ossoff in Tuesday’s critical GA-6 special election, although Republicans have held this direct since the 1970s [Karen Handel Is Keeping Donald Trump At Arm’s Length In Georgia's 6th District, by Henry J Gomez, Buzzfeed, June 17, 2017]. This is partly because she is (of course) useless on immigration, as Paul Nachman noted last night.  But the greater truth: regardless of any “Trump Effect,” demographics is destiny in American politics, even in GA-6. And Republicans can’t say they weren’t warned.

The late Phyllis Schlafly pointed out that mass immigration would ultimately doom conservatism: Because immigrants and their adult children overwhelmingly favor big government, there is no issue more important for conservatives than reducing the future number of legal immigrants allowed into the country each year. Otherwise, legal immigration will continue to add millions of liberal voters every decade, making it extremely unlikely that conservatives will be successful on all the issues they care about.

Schlafly noted that the majority of new legal immigrants, Asians and Hispanics, were heavily in favor of big government and the redistributionist (racial socialist) policies of the Democrats.

Perhaps heeding this conclusion, Trump rallied working-class white Americans to embrace his brand of conservatism, exactly as Schlafly had recommended in her 2014 report [How Trump Won: White Working Class Voters Motivated By Fear Of Immigrants Not Economic Woes, By Jason Le Miere, Newsweek, May 9, 2017].

However, the demographic consequences of decades of mass immigration are already bearing bitter fruit—which is why, three years later, the once-safe Republican district of GA-6 is endangered:

But demographic changes are brewing. Growing minority communities and transplants from other regions have made Atlanta's suburbs increasingly competitive for Democrats. Georgia’s sixth congressional district, the location for April’s special election, exemplifies changes common in booming southern cities like Atlanta, Charlotte and Nashville.

The district was about 80 percent white at the turn of the century. But since then, the black share of the population has grown from 10 percent to 13 percent, the Hispanic share has doubled to 12.5 percent and Asian representation doubled to more than 10 percent

About a fifth of the district is now foreign born – twice the statewide average, according to census data.

Georgia is headed down the same demographic path as California, Virginia and eventually Arizona, as the Democrats gain in once-Red states by replacing the European-American population [Changing demographics are turning Georgia purple, by Mark Meltzer, Atlanta Business Chronicle, August 11, 2016]. 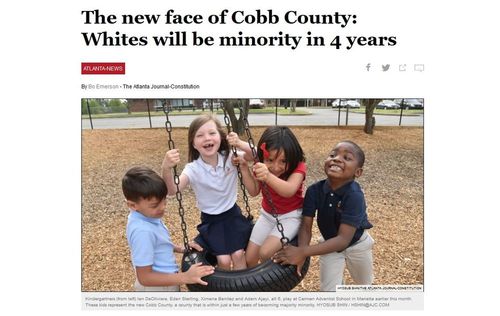 Now, a flood of non-whites is breaking the GOP’s hold on the district. Recently, the Atlanta Journal-Constitution published a story gloating over the demographic collapse of the European-American population in Cobb County—a once-thriving suburb of Atlanta, parts of which are in District 6. In 1980, it was close to 95 percent white. Today, the county is on the verge of being majority-minority:

In four years, this former white conservative bastion is expected to become “majority minority”; that is, minority residents will outnumber white residents.

The massive demographic shift is evident everywhere. Cobb schools offer a dual-language immersion program in which students are taught half the day in Spanish and half the day in English — to the dismay of some longtime residents. In Mableton, where African-Americans accounted for 4 percent of the population 40 years ago, a black man is the state senator.

And in 2016, Cobb County, once a symbol of conservatism, voted for Hillary Clinton for president.

Trump won the presidency in 2016 by increasing the GOP’s share of the white vote and campaigning on issues which increase white working-class turnout. Significantly, even working class voters of other races can be won away from the Democrats simply by opposition to illegal immigration [Working class voters flee Democrats over party's support for illegals, by Paul Bedard, Washington Examiner, June 16, 2017]

But, ultimately, it’s a question of numbers. The Ruling Class has decided America's economic future requires non-white immigrants [American Prosperity Depends on a Nonwhite Future: Without immigration, mostly of Hispanics and Asians, economic growth will falter., by Noah Smith, Bloomberg, May 24, 2017]. Presumably, they will do the jobs white working-class whites will be barred from taking, thanks to Affirmative Action quotas.

And as the demographics of the country change, the consequences will go far beyond GA-6. The endgame: the Californication of every single American state.

Republicans dare not discuss this openly. But they implicitly recognize it in how they endlessly gerrymander congressional districts. As The Washington Post notes:

Since the minority electorate leans liberal, packing minorities has the same effect as packing Democrats, causing the district map to favor Republicans in the same way it favors whites. This key correlation has made majority-minority districts popular among Republican-held state legislatures…

However, this tactic is being increasingly targeted by Democrats. The Left realizes the non-white vote is getting sufficiently large that it doesn’t need to be concentrated in specific districts to ensure non-white representatives.  And if the Republican practice of gerrymandering is broken, it all but ensures the GOP will lose the House [Republicans are so much better than Democrats at gerrymandering, by Christopher Ingraham, Washington Post, June 6, 2016]. Sheer numbers will eventually overwhelm even the most creative effort to shuffle around populations to create advantageous voting districts. In GA-6, by 2020, the Republican candidate will need to capture close to 75-80 percent of the white vote to win.

Of course, this is not impossible. Even Mitt Romney was able to win 88 percent of the white vote in Mississippi. But it would mean Republicans will now need practically the entire white vote simply to eke out a victory in a once-safe district.

As GA-6 goes, so goes the state. In 1990, Georgia was 70 percent white. But mass immigration and growth in the black population leaves Georgia only 54 percent white in 2017. Current projections show the state majority-minority by 2032.

The Democrats continue to hemorrhage white-working class voters. But they are importing replacements. GA-6 is a microcosm of how the country is changing.

And Matt Drudge’s damning verdict on the party may prove true:

Until Republicans take action on the demographic threat to their party and their country—specifically, until they enact an immigration moratorium—they are simply betraying the interests of their own voters.

Paul Kersey [Email him] is the author of the blog SBPDL, and has published the books SBPDL Year One, Hollywood in Blackface and Escape From Detroit, Opiate of America: College Football in Black and White and Second City Confidential: The Black Experience in Chicagoland. His latest book is The Tragic City: Birmingham 1963-2013.