Baltimore’s Black City Attorney Doubles Down, Charges 6 Cops in Death of Freddie Gray, from Murder 2 on Down 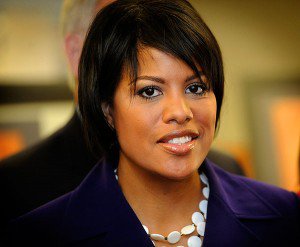 As I write these words, black criminals, SJW media operatives, and black supremacist politicians, including Al Sharpton-style preachers and State’s Attorney Marilyn Mosby, are all celebrating in the streets of that paradise for felons, Baltimore. And the only cautionary theme on CNN is an interview with the mother of would-be murderer Trayvon Martin, Sybrina Fulton, as if she were the mother of a crime victim, instead of a criminal, warning that an indictment does not equate to a conviction.

How so? The supporting story was also that the police gave Gray “a rough ride” in the police van, in which they didn’t put him in a seatbelt.

The mainstream media (MSM) acted as if this “rough ride” could have snapped Gray’s spine. Impossible.

Where did the story come from? Gray’s family’s lawyer, who was putting together a lawsuit seeking tens of millions of dollars. It was a self-interested statement lacking in credibility, yet the MSM shouted it credulously through their megaphones.

That narrative collapsed with statements of the other black prisoner in the van, according to which Gray was throwing himself around in the van, trying to harm himself.

The Baltimore PD then leaked to the media, much to some of the MSM’s chagrin, the claim that Gray’s head was injured, and that said injury matched a bolt in the van. 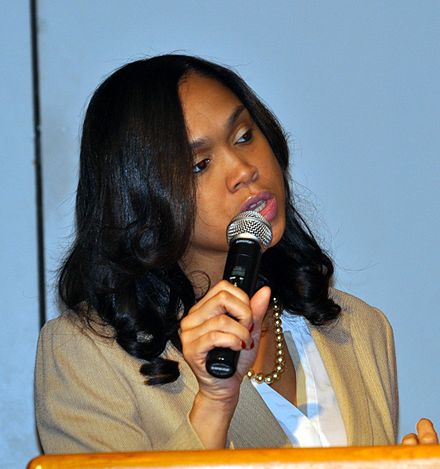 Black State’s Attorney Marilyn Mosby (right) also learned that at some point, police allegedly put Gray on his belly in the back of the van. But it would be impossible for Gray to have hurt his spine or his head from such a position. And yet, Mosby and her MSM lackeys repeat such information with sinister intonation (Mosby: “placing him on his stomach, head-first”), as if it were a sign of some sort of evil police action, the same way they intone the charge that police left Gray unbelted on the bench on the van. Whatever Mosby and the MSM say, they give it the same sinister intonation.

Instead of looking that the incident in the light of the new information (not a spine injury, Gray injuring himself), Baltimore State’s Attorney Marilyn Mosby just combined it with the original narrative, and charged and overcharged six cops to the hilt.

As for Mosby personally, who is married to black  Councilman Nick Mosby, (pictured right—email him) 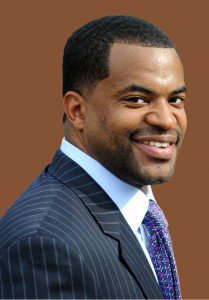 who supported the rioters, all of the aspects that were used against St. Louis County Prosecuting Attorney Robert McCulloch as disqualifying factors in his running the grand jury in the death of would-be cop-killer, Mike Brown (his father, Officer Paul McCulloch, having been murdered by a black man), are used grounds for praising and recommending Mosby: That she comes from a family of five generations of policemen, and that a cousin of hers was murdered. Black supremacist former congressman and NAACP boss Kweisi Mfume, falsely spoke of Mosby as a “victim,” as if that were a recommendation. (She wasn’t a victim, but if she had been, that could be grounds for exclusion from a jury in a trial, not grounds for inclusion.)

Mosby declared in her speech announcing the charges that she had heard the calls for “No justice, no peace,” and was responding to them with the indictments.

Finally, unlike with whites, contrary to the MSM line on her, Mosby’s family background in law enforcement does not mean that she appreciates the dangers and sacrifices lawmen face. Most black cops are counter-policemen, who do not put service to the law first. Indeed, she brags that her grandfather was the founder of a black counter-police organization.

Mayor Stephanie Rawlings-Blake, [Email her] who initially declared that she would permit the racist black thugs to riot, who then spoke of “thugs,” but then backtracked and denied that there are any thugs in Baltimore City, today vowed to gut the Police Department:

Baltimore’s police union, the Fraternal Order of Police, led by Gene Ryan, is so far standing by their officers, protesting their innocence, and demanding that Mosby be replaced with a special prosecutor. FOP attorney Michael Davey complained that he had “never seen such a rush” to file charges against cops, and believes that the charges, in a case where the investigation was not completed, was politically motivated, due to the “publicity” (i.e., the media).

The 28 Charges Against the Six Officers

*Any sentence that does not constitute cruel & unusual punishment