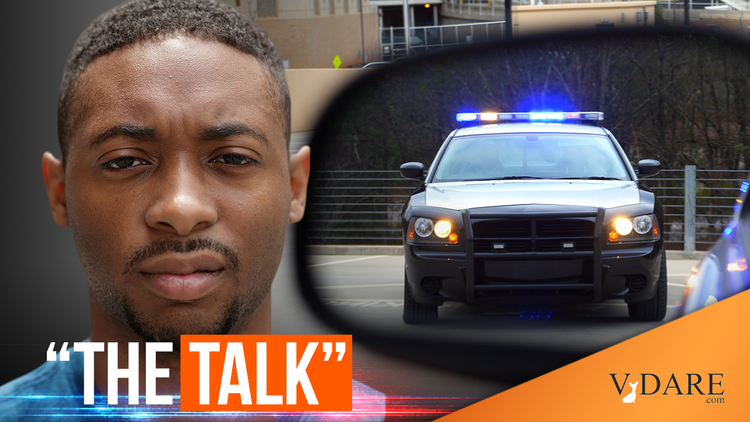 Talking About The Talk

The Los Angeles Times recently ran one of the many articles about The Talk that black parents in our racist society have to give their black sons to keep them from being gunned down by white racist cops:

When Martin A. Gordon talks to his 19-year-old son about the history of race relations in America, he invokes the Black Panthers, Martin Luther King Jr.and the watershed moments of the civil rights era. It's a story of hard-won rights that fills the '60s-era activist with pride.

Then the conversation turns urgently personal, survival its theme: On the wrong street, at the wrong time of day, he tells his son, pride might be his undoing. "I know my son can be a moment away from being killed if he acts the wrong way, if he's arrogant," Gordon said. "He started to learn about this as a child." ...

The incident, which remains under investigation, followed the controversial shooting death of an unarmed black teen in Florida by a neighborhood watch leader. For many black parents, the shootings have given fresh relevance to a painful generations-old conversation. "The Talk," some call it.

"Certain things are a reality for him — he needed to understand that early on," Jim Collins, a longtime Pasadena resident, recalled of his conversation with his son. "The Talk is because they have to know what to do and not do."

Parents say some version of the conversation, ubiquitous in African American life, is necessary regardless of how high they climb on the socioeconomic ladder. It is about learning to say "Yes, sir" and "No, sir" when a policeman pulls you over, no matter how unjustified the stop seems. It is about keeping your hands on the steering wheel and giving officers no cause for panic. It is about swallowing your anger and pride and coming home alive. ...

Walker said that when his grandson, now 20, was learning to drive a few years ago, he started hammering home certain realities about dealing with police.

"I tell him one of the worst things to do is be belligerent with police," Walker said. "Whether you're right or not."

My sons aren't black, but I have given them the exactly same Talk about cops, although mine was probably less polite toward cops. I made ensure to emphasize that "Cops have guns, with which, if you piss them off or make them feel uneasy, they might kill you. The kind of people who become cops have personalities where they want to dominate others around them. (If they just wanted to save people, they could have become firemen.) So, let them. Remember, cops have guns."

When a federal agent and a deputy in plain clothes "debriefing" after serving a drug bust behind a fashionable watering hole in my neighborhood gunned down an 18-year-old violist, I couldn't find out the names of the two shooters for many months after the killing. The thick blue line had formed up pretty solid. As far as I can tell, this shooting, which is still being litigated (so far as I know) was about as ambiguous as the Trayvon Martin shooting. But the victim in my local shooting was white, so, basically, nobody cared other than friends and family in the other end of the San Fernando Valley and few locals from my end.  Media coverage was grudging and never made local TV much less the national news.

Similarly, nobody considers it a national disgrace and tragedy, a violation of everything that Martin and Malcolm died for, that I felt the need to give The Talk to my sons. Of course, in a sane world, that would raise the question of whether our culture's obsession with black victimization doesn't, on the whole, contribute to more knuckleheaded behavior on the part of young blacks. There are a whole bunch of people in modern America, such as Josh Barro, who benefit in terms of status from punishing other people for noticing the bad behavior of young black males. With all the influential people who benefit from bad black behavior and thus encourage it and/or punish those who discourage, then, not surprisingly, we get a lot of bad black behavior.