In a quote usually attributed to Lenin, he says when the time comes to hang the capitalists, they will bid against each other for the sale of the rope. These days, American capitalists seem eager enough to live up to that reputation, especially when it comes to mass immigration. As you all know, immigrants and the children of immigrants tend to vote overwhelmingly for economically left-wing parties. If mass immigration continues, it means the end of America’s free market system—what’s left of it anyways.

Yet it’s full steam ahead for Open Borders according to the big business lobby. Their shills remain incredibly eager, fanatical really, about their “need” to import a never-ending supply for cheap labor. Adding insult to injury, these mouthpieces continue to pose as “conservatives.”

For example, a recent article in Bloomberg called Being Pro-Capitalist Means Being Pro-Immigrant by Francis Wilkinson, sarcastically quotes a pro-immigrant “bleeding heart” “whin[ing] about the poor abused immigrants,” before noting that it’s actually Thomas Donohue [Email him] president and CEO of the U.S. Chamber of Commerce.

Trump’s threat to the humane treatment of immigrants isn’t an outlier. It’s linked to his threat to ethical government and democracy, and to his threat to successful capitalism. Democrats should vocally make that case. This time, the U.S. Chamber of Commerce should join them.

[Being Pro-Capitalist Means Being Pro-Immigrant, by Francis Wilkinsoin, July 13, 2018] 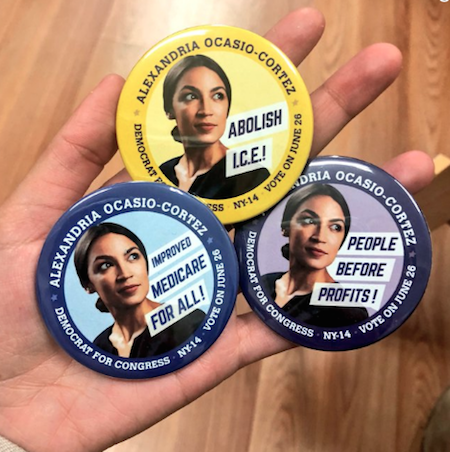 Perhaps Bloomberg hasn’t noticed, but the Democrats are currently being taken over by outright socialists. Alexandria Ocasio-Cortez, a representative of the demographic Bloomberg is so desperate to import, just won the Democrat nomination over one of the most powerful Congressmen in the country while running on an openly socialist agenda. In her campaign she has the support of Bernie Sanders, who as we all know, was the socialist thorn in Hillary Clinton’s side during the presidential election. Ocasio-Cortez will almost certainly be in the House next year, and there are lots of other candidates popping up all over the country touting socialism. Does Bloomberg think that an entire Congress filled with the likes of her are going to limit government spending or cut their taxes?

Still, the point of Wilkinson’s title, that being pro-capitalist means being pro-immigrant, does have a message we need to consider. I don’t concede for a moment that being a libertarian means I must support open borders—Peter Brimelow has quite explicitly argued the opposite. Hans Herman-Hoppe has built an entire philosophy proving how libertarianism requires borders to protect it.

then yes, you would logically equate immigration and capitalism.

After all, if someone is purely interested in making money to the exclusion of all other considerations, they will always pursue the cheapest possible labor in order to create the greatest short-term profits. In the long run, this will hinder the development of labor saving technology or more efficient techniques, but if your concern doesn’t go past the next quarter, why should you care? In this case, it’s like tragedy of the commons with the commons being our American communities, the overgrazing sheep being cheap labor, and the shortsighted, destructive and greedy shepherd being the Chamber of Commerce.

We here at VDARE.com argue that perhaps the most significant factor in the fall of nations, empires and civilizations is the desire for cheap labor. When sociopathic elites put their own desire for material gain and helot labor over the wellbeing of their countrymen or any thought about long-term consequences, the nation struggles to survive.

Of course, capitalists also destroy themselves by this process. Once the exploited and culturally alienated helots gain political rights and consciousness, they can overthrow the very system that invited them into the country. But what do the elites care? They can move away.

Their greed is endangering the existence of our future. My only consolation is that if Bloomberg gets what they want, the same immigrants they want so desperately right now will one day vote to nationalize their wealth. And the rope sellers will deserve their fate.