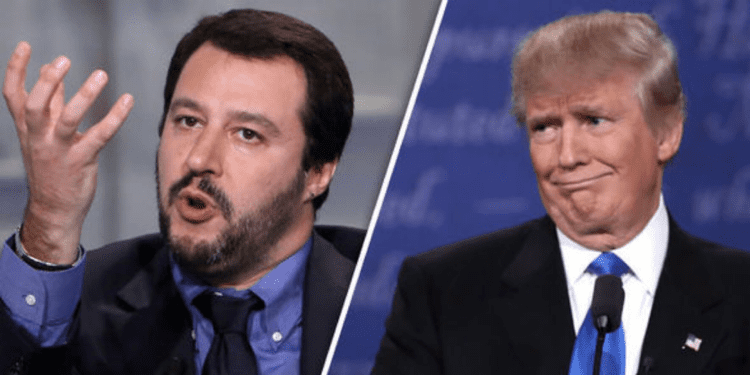 “The Balkan route has reopened,” the Italian deputy prime minister said, adding: “If the migrant flow does not stop we don’t rule out physical barriers on the frontier as an extreme remedy.”

A ban on rescue ships docking at Italian ports has helped to reduce migrant arrivals by sea from north Africa this year to 2,160 compared with 15,617 over the same period last year.

The number of migrants, including many Pakistanis, intercepted while crossing through woods on the frontier with Slovenia has risen, however, to 780 this year from a total of 446 last year.

[Matteo Salvini wants anti-migrant border fence of his own, by Tom Kington, The Times, June 28, 2019]

Breitbart is promoting the story under the title of Italy’s Trump: Salvini Wants To Build A Wall To Stop Illegal Migration From Balkans [by Jack Montgomery, June 29, 2019]. Yet there's a big difference between President Trump and Deputy Prime Minister Salvini. Salvini delivered, and delivered quickly, after taking office.

The number of illegal migrants who were put on aeroplanes and sent home stood at 2,833 between January 1st and May 31st this year prior to Salvini’s entering the Viminale. Since then, it has risen to 3,626 for the period between June 1st and December 9th.

After sending sea arrival numbers down by 65 per cent compared to the previous year with his tough stance on NGO boats ferrying migrants across the Mediterranean Sea, the League (Lega) leader promised in September that upping deportation numbers was next on the government’s to-do list.

Currently, a hysterical post-German woman of an increasingly common type tried to dump migrants into Italy [Sea-Watch 3: Refugee ship defies Italy's far-right leader Matteo Salvini by taking rescued migrants to port, by Chico Harlan, Independent, June 27, 2019]. Italy promptly arrested the woman, even standing up to the condemnation of other countries. (Of course, none of the other countries, including Vatican City, will accept the migrants.)

There's also signs that Salvini's talk about a wall has already had the desired effect along the Slovenian border. The two countries are already starting joint border patrols.

The new mixed patrols reflect provisions of a memorandum of understanding (MOU) between Rome and Ljubljana on cross-border cooperation, recently signed by the respective chiefs of immigration and borders of the two governments.

The MOU “is based on positive experience from similar forms of cross-border cooperation already started by the Department for Public Security and with the police of other bordering countries such as Austria, Switzerland, and France,” said a statement from Italy’s interior ministry.

The agreement, statement continued, “will make it possible to step up activities against irregular migration along the ‘Balkan route,’ which for some time has been seeing a resumption of migration flows that — through Bosnia Herzegovina, Croatia and Slovenia — arrive in Friuli Venezia Giulia.”

Contrast this to what's happening in America. President Trump is still tweeting about Hillary Clinton and the 2016 election. Meanwhile, there's no wall and illegal border crossings are at a seven year high.

I'm not getting pumped up about "Italy's Trump." Salvini is doing far better than President Trump, and he's not even technically the head of the government. Where's our Salvini? And is there any chance President Trump could learn a thing or two from the Italian leader about how to deliver on his promises?