The Trump Effect lives! For the fourth consecutive month the immigrant working-age population (legal and illegal) declined from the same month of the prior year. This is a dramatic change from the last months of the Obama Regime, when year-over-year immigrant working-age population increases ran far in excess of the estimated 1 million legal immigrants admitted annually,  suggesting that an unreported illegal alien surge was underway. And, finally, there are signs that this labor market tightening is boosting blue collar wages.

Not since the Great Recession has the foreign-born working-age population declined for four consecutive months—but now, in telling contrast, the economy is expanding. This makes the Trump Era immigrant workforce decline especially striking.

Note that the immigrant working-age population is a net number—what statisticians call a “stock.” There have been reports that illegal crossings of the border in the Southwest—the “flow”—picked up this summer, although it’s still below recent years. But any gross inflow seems to have been swamped by the gross outflow.

Now the bad news: immigrants took all the jobs created this month, according to the Household Survey, which records workers’ immigrant status (but not their legal status). The Household Survey only 57,000 jobs were created last month—a fraction of the 228,000 reported by the far more widely cited Payroll Survey.

The November results—a decline (year over year) in the foreign-born working age population coupled with an apparently paradoxical increase (month over month) in native-born workers losing jobs to immigrants, is exactly what we anticipated would occur in the near future. Among the reasons: immigrant labor force participation rates are rising faster than those of native-born Americans, perhaps because immigrants are more mobile than native-born Americans and can move to new jobs.

But I also noted:

Both trends cannot exist together indefinitely. Something has to give. The post-election stall in foreign-born population growth hastens the day when U.S. employers are forced to go native—and maybe pay them more 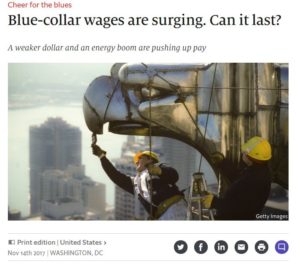 And in fact that day when American employers, out of necessity, pivot to American-born workers and pay them more, may be upon us:

It is commonly said that wage stagnation contributed to an economic anxiety in middle America that carried Donald Trump into the White House…Yet Mr. Trump’s rise seems to have coincided with a turnaround in fortunes for the middle class. … The latest development—one that will be of particular interest to Mr. Trump—is that blue-collar wages have begun to rocket. In the year [2017] to the third quarter, wage and salary growth for the likes of factory workers, builders and drivers easily outstripped that for professionals and managers. In some cases, blue-collar pay growth now exceeds 4%...” Blue-collar wages are surging. Can it last?,  The Economist, Magazine, November 14th 2017

Note that The Economist, typically, suppresses any discussion of the immigration dimension.

Trump may not have delivered (yet) on his promise to bring back the factory and coal jobs so many of his supporters lost during the Obama years. But by shrinking the pool of immigrants willing to do that work, he has put more money in pockets of his voters.

Further evidence of a quantum improvement in American job prospects under Trump is evident in our last chart. Since last November the native-born American labor force grew 19-times faster than the immigrant labor force.

Of course, ten months of Trump has not come close to undoing the damage done by eight years of Obama. Native-born American workers lost ground to their foreign-born competitors throughout the Obama years, and, as we have seen, this trend accelerated significantly in the months leading up to the election: 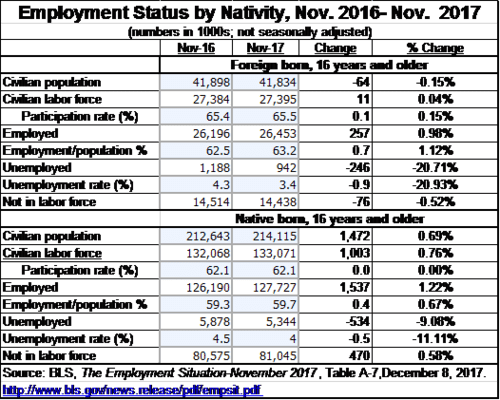 All of this progress could reverse, unless Congress legislates a reduction in immigration e.g. the RAISE Act, and some of it may be statistical noise.

But, by some combination of enforcement measures and jawboning (assisted, ironically, by the hysterical MSM), Trump appears to have succeeded in reversing the immigrant influx.

Which indeed appears to be tightening the labor market—and benefit working-class Trump supporters across the country.