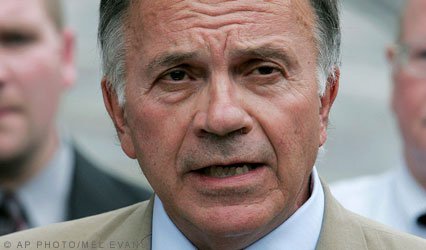 Former Congressman (1999-2009) and immigration patriot Tom Tancredo has given up on the Republican Party.

Sadly, it has become obvious that the Republican establishment simply has no intention of ever fulfilling promises made in platforms and campaign speeches. To their mind, there are elections, and then there is “governing,” and governing to them means not messing with a gargantuan government on autopilot. By insulting the grassroots, the GOP leadership has set upon a suicide mission. The problem is that failed leadership is allowing Obama to destroy the Constitution and take the whole country down the drain. Well, count me out.

The Boehner budget deal is the last straw, and enough is enough. I cannot any longer defend this transparently dishonest charade called the Republican Party.

What I will do instead is join the largest political group in the nation, unaffiliated Independents. In Colorado, they outnumber both “major” political parties.  [Former Congressman: I'm Quitting GOP by Tom Tancredo; Breitbart.com, October 30th 2015.]

The next day I will begin working my tail off for the next twelve months to organize Independents to help elect Sen. Ted Cruz (R-TX) as President of the United States. Cruz is the only candidate who both understands the left’s agenda and has demonstrated the courage to fight for our liberties, our sovereignty, and the survival of constitutional government.

Does Tom not know that Ted Cruz is an H-1B booster?