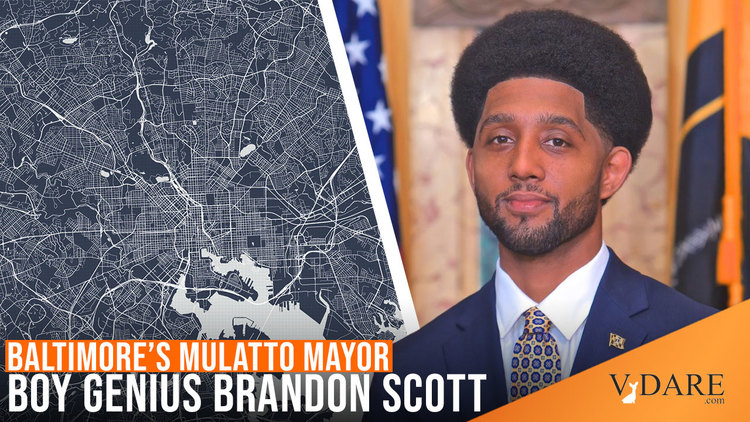 My family goes back a long way in Baltimore, and it used to be a nice place to live when I was a child. There were decent public schools with active parental involvement. As long as you stayed out of certain neighborhoods, there was not much to fear. All of that changed rapidly after 1965, as the great social experiment of forced school desegregation sent white people running for the county.

I lived in a decent section of the city—near Roland Park—until the fall of 2014. By then, you could be sure that anything left in an unlocked car would vanish, and anything of value would be stolen from a porch or a garage. The Northern District police department advised residents to lock their second-floor windows and to avoid going out after dark. When a gang of black teenage carjackers shot one of my neighbors through the neck [Suspect arrested in Roland Park shooting of Zeb Drinkwater, by Justin George, Baltimore Sun, August 21, 2013], I began to think it was time to say goodbye to the town that my ancestor John Cockey had helped to establish.

Now, as the city follows the typical course of majority-black municipalities into ever-deepening violence, corruption, and mismanagement, Baltimore’s Mulatto Mayor, boy genius Brandon Scott [Tweet him], has announced a bold new Comprehensive Violence Prevention Plan. The city is plagued with “gun violence,” which he claims is a public health emergency and “the primary barrier to sustainably addressing Baltimore’s most pressing inequities—joblessness, homelessness, poor education and health.”  [Mayor's Violence Prevention Plan, Effective: July 1, 2021 – June 30, 2026, PDF]. He gives no hint of the least suspicion that these “inequities” are the result of decades of white and black flight, which has left the city with an ineducable, unemployable black underclass with a mean IQ around 76 or less [The Effect Of Urban Flight On Iq Distribution, La Griffe Du Lion, Volume 4, Number 2, August 2002]. 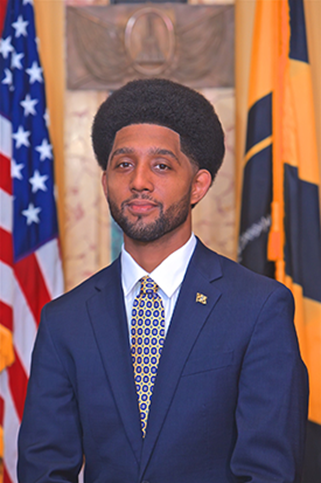 Scott’s self-satisfied countenance in the official photograph above is reminiscent of Louis XIV, Le Roi Soleil; and the plan’s organizational chart reinforces a heliocentric conceit. Mayor Scott is Center of the Universe, or perhaps Head of the Squid: 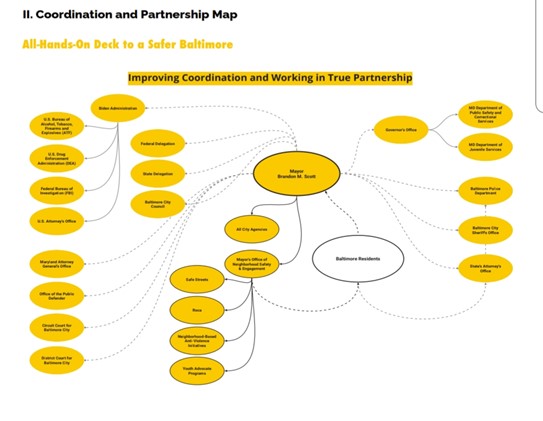 The Mayor is the center around which all else orbits, and why not? Sun-like, he rose very rapidly. Born in 1984, he graduated from a pretty good public school, Mervo (Mergenthaler Vocational-Technical High School) and then from St. Mary’s, an elegant little public college in Maryland’s colonial capital, where he majored in political science. He apparently learned well, for he joined the city council in 2011, where he called for the removal of Confederate monuments. In 2020, he won election as Baltimore’s youngest mayor after revelations of Catherine Pugh’s corruption forced her to resign [Timeline: The history of Healthy Holly and the downfall of Mayor Pugh, by Todd Krickle, Fox News Baltimore, February 26th 2020].

He claims to know that he is not the smartest person in the room.

It’s not going to be the Brandon Scott show. We’ve had mayor after mayor after mayor where the mayor had to be the smartest person in the room and the superstar at all times… I’m going to surround myself [with] the best and the brightest, the most talented people who will make me look like a genius because they all worked toward this cohesive vision to make Baltimore the best city it can be.

[Q&A: Brandon Scott on his Park Heights roots, his vision for ‘transformational and generational change’ and more, by Brandon Weigel, Baltimore Fishbowl, May 21, 2020]

Honestly, if Scott didn’t look so smug, I’d believe him.  He appears not to be merely another stupid grifter like some of his recent predecessors [The Sheila Dixon story: It wasn’t just about the gift cards, by Joan Jacobson, Baltimore Brew, May 18, 2020]. Time will tell.

But let’s look at his program. It has three “pillars:”

The “public health approach” is a favorite slogan of the anti-gun Left, which must surely be emboldened by Americans’ supine acceptance of Covid lockdowns and mandatory injection of experimental vaccines. The new plan touts the city’s “partnership” with Michael Bloomberg’s Everytown for Gun Safety, which highlights (surprise!) the trauma that "Gun Violence” inflicts on Black Americans, who are apparently always the prey and never the predators. Everytown has now added homemade “ghost guns” to the haunted house of scary firearms that started in the 1960s with “Saturday Night Specials” and moved on to “Assault Rifles.”

Is Mr. Bloomberg the smartest guy in the mayor’s room? He is at least smart enough to leverage black violence against everyone else’s gun rights.

The second “pillar” contains quite a bit of prolixity such as the following:

Mayor Scott will not only routinely engage with neighborhoods to discuss their specific needs and share information about the work that is happening, he will also focus on building capacity for community-based organizations (CBOs) that operate in Baltimore neighborhoods — to amplify the effectiveness of community violence intervention strategies and the provision of direct services and wraparound supports, to name a few. These community-based assets will be critical partners in the coproduction of public safety for our city.

Translation: the mayor will encourage the growth of nonprofits that will sprout like a rainbow forest of fungi as they feed off the city’s decay.

The … Violence Prevention Task Force (VPTF)… is tasked with implementing violence prevention strategies in collaboration with partners, providing ongoing training and technical assistance to programs and services, and collecting data and reviewing results from performance measures and indicators. The VPTF will provide an annual report for the Mayor, City Council, and the public to review.

Then there’s Mayor Scott’s commitment to establishing a guaranteed income pilot program for low-income residents. Nothing strengthens the moral fiber of a community like a handout!

And, needless to say:

The Mayor has tasked Baltimore’s Chief Equity Officer to create a taskforce on structural racism to identify key policies and practices within the city — spanning law enforcement, housing, employment, health, education, transportation, and environment — that contribute to structural racism, with particular attention to conditions that elevate individual and community risk for violence.

the police department will publicly acknowledge the harm their department has historically inflicted on marginalized communities of color.

Studies have shown that nothing stops blacks from shooting the place up like a really sincere apology from the cops!

What about Pillar 3, you ask? Results and accountability? Read it and weep:

How We Will Measure Progress and Success:

Translation: Success is defined by growth of the managerial state and its subsidiary rackets. Subjective polling may be used to prop up claims of success. The document does not explain why Mr. Scott’s plan will work better than that of disgraced former mayor Catherine Pugh.

For comic relief, Scott’s plan includes a two-page glossary of acronyms for the various agencies. My personal favorite: MOMWOB, Mayor’s Office of Minority and Women-Owned Business.

Mayor Scott grew up in Park Heights, a suburb originally built to accommodate the late-19th-century surge of European immigrants. By 1950, the neighborhood was mostly Jewish; but blockbusting and the influx of blacks in the 1960s displaced the Jews northwestward, into the county.

Scott is too young to remember when his childhood home was beautiful and safe. He moved out too. But he really, really feels for the folks he left behind. He told Baltimore Fishbowl’s Weigel: “Most of my friends still live in 21215. Any time there’s a shooting or something that happens in Park Heights…my heart drops.”

Writing in 1941, the lawyer and poet William Alexander Percy summed up the answer in two sentences in his autobiography Lanterns on the Levee:

A white poolroom or soda-water stand is a depressing place where leisure does not seem excellent or ribaldry amusing. But Negro convocations, legal or otherwise, are always enjoyable affairs right down to the first pistol-shot.

As nothing in Mayor Scott’s personal utterances or official plans approaches the wisdom of Will Percy’s timeless insight, I do not have high expectations for the future of my former hometown.

Dr. Cockey [Email him] is a refugee from Baltimore and author of several books, including The Sacred Fury, a novel set in the same city and involving the ghost of Edgar Allan Poe.