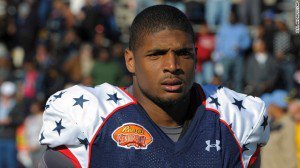 It doesn’t take much to be a hero in Affirmative Action America. Michael Sam is the most popular athlete in the country this week, praised by the Main Stream Media, funded by corporations, and hailed by the President of the United States. And all he had to do is be a homosexual. 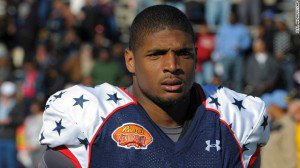 As Steve Sailer says: stop laughing! Soon you might lose your job if you cheer against the St. Louis Rams (or for the Washington Redskins).

Sam was picked by the Rams in the seventh round of the National Football League draft. President Obama, having nothing better to do, paid this tribute to a hero of his new America:

“From the playing field to the corporate boardroom, LGBT Americans prove everyday that you should be judged by what you do and not who you are," Obama said. He also congratulated the NFL and the St. Louis Rams, the team that drafted Sam.

As usual, Obama was wrong. Sam was rewarded not because of anything he did, but because of who he was. (Come to think about it, rather like Obama himself). Before even being drafted to play in the NFL, Sam was an asset for corporate America and signed an endorsement deal with Visa. [Michael Sam Signs With Visa, by Darren Rovell, ESPN, May 8, 2014]

On February 7, 2014, well before his bottom-of-the barrel-drafting—the 249th pick out of 256—Sam was depicted on the cover of Sports Illustrated with the caption: America is Ready for Michael Sam. This is similar to the treatment given NBA journeyman center Jason Collins, who prolonged his otherwise un-noteworthy career and earned a 2013 SI cover by securing a niche as “The Gay Athlete.”

As LA Clippers owner Donald Sterling is learning, sports in America is just show business, and the social value of a person’s identity can be more important than athletic talent. With Sam, the Rams have secured MSM good will and Presidential praise—far more than other teams can expect from their marginal players.

Will sports fans put up with it? The question is beside the point.

In the modern economics of sports, TV rights and advertising agency preferences dominate—actual fans are secondary.

And all of entertainment is just a tool for pushing a Ruling Class Narrative from the top down. Inconvenient truths are simply suppressed and dissenters punished.

This is happening throughout the Western world. As the Sam story broke, a similar gender-bending elite manipulation occurred in Britain, where the audience watching the Eurovision song contest voted for an act by two comely Polish blondes, but the judges simply ignored them and awarded the prize to a bearded transvestite who could lecture Europeans on the evils of “homophobia.” Eurovision 2014: Voting Controversy after UK public revealed to have voted Donatan & Cleo first – but jury placed them last, by Jonathan Brown, Independent, May 11, 2014).

It doesn’t matter if ordinary sports fans are disgusted by the spectacle of a man celebrating by making out with another man and shoving cake in each other’s face like a kind of perverse wedding.

And if an athlete tweets his distaste—if only for a moment for deleting it—then suspend him, take his money, and off to re-education with him! [Jones fined after sending tweet about Michael Sam, by Steven Wine, AP, May 12, 2014]

Insofar as there is debate in the MSM at all, it centers on whether Sam is being celebrated enough. Thus black sports journalist Jarrett Bell [Twitter] warns the NFL they are on notice at USA Today:

No doubt, history was witnessed at the NFL Draft as Mike Kensil, vice president of football operations, took to the podium and announced the pick to the sparse crowd that roared…

It was a bold step for the macho-heavy NFL, and as the draft wound down it appeared that it would not happen, that the league would have to explain itself for a major embarrassment.

Remember, sometimes it's all about image.

Had it not happened, if Rams GM Les Snead and coach Jeff Fisher not decided to draft the prospect who made his mark across the state in Columbia, Mo., about 125 miles away, it may have been a long, long time before a person came out in the manner that Sam did.

"This is a football decision," Fisher said. "We are very, very comfortable with everything about him."

Yet amid all of the back-slapping for the NFL, there's an essential question:

Why did it take so long?

Why did Sam have to wait until a team used what is generally regarded as a throwaway pick?

This rapturous Ruling Class reaction to Sam is an instructive contrast to another seventh round pick NFL pick who seems like he was from a different century—Pat Tillman. 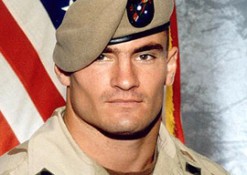 Almost four years later, Tillman gave up a three-year, multimillion dollar contract with the NFL to be an Army Ranger.

On September 12, 2001, Pat Tillman gave an interview in which he said,

“My great-grandfather was at Pearl Harbor and a lot of my family has gone and fought in wars, and I really haven’t done a damn thing.”

Only after Tillman was killed in Afghanistan did he make the cover of Sports Illustrated—on May 3, 2004. The caption was “An Athlete Dies a Soldier.” On the fifth anniversary of the September 11 attacks, in an effort to capitalize on then-still-lingering patriotism, Sports Illustrated put him there again, with the caption “Remember His Name.”

Tillman was no cookie-cutter conservative. He was an atheist who opposed American foreign policy but continued to do his duty. He was killed by friendly fire. The government he served tried to cover it up and lie to his family.

But to the NFL today, it is as though “Pat Tillman never existed.” [Where was the Pat Tillman Story on NFL Sunday, by Dave Zirin, Edge of Sports, September 13, 2013]. Tillman, who combined old fashioned virtus and political sophistication, is not a story is not one the NFL wants to tell—or that Obama’s post-America wants to hear.

Instead, post-America prefers slogans, a simple Narrative about Good and Evil and social progress as defined by Hollywood. In this country, the highest act of courage is coming out as homosexual—even though the MSM and Corporate America actually supports this decision and opposition is on the verge of being criminalized.

For post-America, Michael Sam did, in Tillman’s phrase, a “damn thing” far greater than fighting in a war or actually sacrificing for his country. Sam a profile in courage even though his sexual identity is the sole reason he is receiving more fame and fortune than the hundreds of others drafted before him. He’s a soldier in the war the MSM really supports—the long Kulturkampf against the historic American nation and its Christian religion. He’ll be hailed as a hero even if he never plays a game.

The NFL has taken sides in that never-ending Culture War by promoting a marginal draft pick as a “historic” event that everyone is required to celebrate.

It has turned its back on its fan base—and on America.