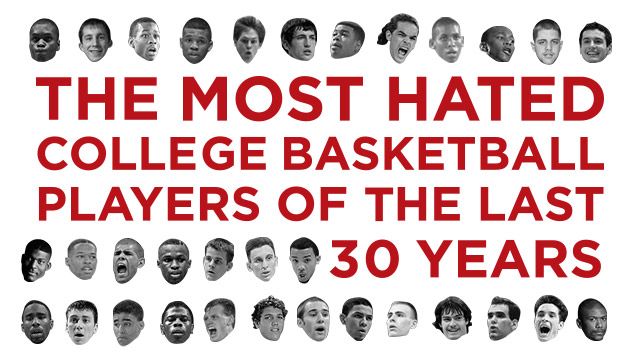 With the NCAA basketball tournament underway, Grantland has a feature entitled "The Most Hated College Basketball Players of the Last 30 Years." It's a bracket of 32 (apparently) hated players, divided up into four sectors: the 1980s, the 1990s, 2000s, and Duke U.

"Name someone you hate."

Yes, Wojo. Hardcourt-slapping, charge-drawing, pass-and-cut-awaying Steve Wojciechowski, the honorable-mention All-American who played point guard for Duke from 1994 to 1998. I'm probably not alone in feeling this way — the Washington Times called him "the most reviled 6.6-point scorer in NCAA basketball history." ... In the moment, however, few things make my blood boil like some ACC pretty boy or deadeye shooter or egregious flopper or hard-nosed defender — or some unholy amalgamation of all these qualities. ...

The 32-player competition has four regions — one each for players from the 1980s, 1990s, and 21st century, and another for Duke Blue Devils. Before Coach K and the Cameron Crazies get too worked up about being singled out, let me explain the decision to turn part of this bracket into a mini-tournament of Duke hate. For starters, imagine the alternative. Think of all the Dukies who didn't make the cut: Carlos Boozer, Kyle Singler, Trajan Langdon, Brian Zoubek, Ryan Kelly, the Brothers Plumlee, Chris Collins, Thomas Hill, Alaa Abdelnaby, and many, many more. If Duke weren't confined to its own quadrant, half the athletes in the competition might be Blue Devils. And if they were peppered throughout all the regions, an all-Duke Final Four wouldn't just be a possibility — it would be a likelihood.

... There's not much mystery to what turned us off about Bill Curley and Eric Montross — they were white stiffs with terrible haircuts. And does anyone bring it all together in one package better than Tyler Hansbrough? Psycho T had it all — accolades galore, 4,000 percent effort, and those bugged-out, demonstrative, lunatic eyes. Plus, during an era in which few players with serious NBA futures spend more than two years in school, it felt like Hansbrough never left.

Much of the anti-Duke hate, of course, is the twisted mirror image of Chinese people liking Jeremy Lin for being Chinese: Duke hate is a phenomenon of white fans hating a mostly white team for being mostly white and winning at the black man's game. Six of the eight Duke players are white (and Shane Battier has a white mother. Update: so does Austin Rivers). My vague recollection is the inflection point in Duke Hate came in the early 1990s when Duke upset a black-dominated U. of Nevada Las Vegas team that the press had been extolling as the greatest college team ever.Much of the hatred seems to be directed at the more genetically inferior players who succeed in college basketball based more on work ethic and character.

Judging from the racial makeup of the three decades, anti-white hatred appears to be a growing phenomenon. Only one (Danny Ainge) of the eight widely hated players from the 1980s is white. Only two of eight from the 1990s are whites. But of the 2000s, six are white (and Joakim Noah has three white grandparents).

P.S. Here are the results among Grantland readers (not a particularly vibrant bunch):

Not exactly representative of the racial demographics of college basketball stars.