The Associated Press has plopped out an article that is rather curious. It worries over the idea that immigrants are increasingly living in communities of “racial isolation.” The scribbler visits California farm town Watsonville and frets that nearly everyone is Mexican and speaks Spanish. A Hispanic who was the first mayor of his ethnicity observed, “It’s got a very different feel than a traditional American town.” Forty percent of town residents are foreign born and most of the business signage is in Spanish.

Below, downtown Watsonville, which is described as “like being in a small Mexican town” by a resident. 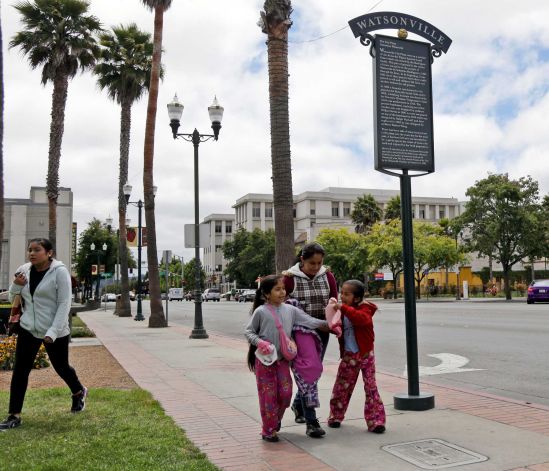 Isn’t that what liberals wanted? Haven’t they condemned assimilation as racism against poor victimized brown people? Haven’t they insisted on America becoming a bilingual Spanish-speaking country so immigrants wouldn’t have to learn English? Even though a strong majority of US voters supports English as the official language, liberals reject language assimilation. Plus, expecting immigrants to accept American values is likewise thought to be cultural arrogance on the part of the citizens.

Immigrants are taking part in the American economy to improve their material lives, and most seem happy living in ethnic and linguistic separation from the dominant culture. They came for the money, not to become Americans as previous generations of immigrants did. They have their own Spanish-language media catering to their desires and the Watsonville library has Bilingual Toddler Time. None of the Mexicans in the article seemed to be pining for inclusion in the broader society. Watsonville should be seen as a paradise by liberals who looked to immigration to make America less American, but Dr. Frankenstein doesn’t seem satisfied with his creation.

Whatever were the liberals expecting when they promoted the mass immigration of millions without assimilation? The balkanization result was totally predictable.

The scene is an increasingly typical one in towns across California, where Hispanics are on pace to become the largest ethnic group next year. And Watsonville is but one of dozens of California communities where Hispanics outnumber whites.

The town of 52,000 on the picturesque Central Coast, where good soil and pleasant weather enrich crops of strawberries and lettuce, and a driven and determined low-wage workforce fuels small factories producing everything from high-end shock absorbers to handcrafted glassware.

Spanish is spoken in most homes and businesses in town, and one out of five households is linguistically isolated, meaning no one over 14 speaks English.

Rising immigration hasn’t made Watsonville more diverse; it is a community heading toward racial isolation, a growing phenomenon in a state that offers one possible look at how the nation may change as non-Hispanic whites become a minority in the coming months.

Like most U.S. towns, Watsonville has been formed by waves of immigrants, Croats, Portuguese, Filipinos and Japanese, each arriving with their own language, customs and cuisine. The current surge of Hispanics has brought a Latin American influence.

“For me, downtown Watsonville is like being in a small Mexican town,” said Oscar Rios, who was Watsonville’s first Latino mayor. “Everyone speaks Spanish. The restaurants are Mexican. It’s got a very different feel than a traditional American town.”

Rios came into office after a landmark voting rights case 25 years ago deemed Watsonville’s at-large election system discriminatory and mandated district elections to end all-white political leadership. At the time, 50 percent of the residents were Hispanic.

Today, 82 percent are either immigrants, or descendants of immigrants, mostly from Mexico but also elsewhere in Latin America.

But predominantly white neighborhoods are also seeing an influx of Latinos, Logan said.
Hans Johnson at the Public Policy Institute of California said there are signs of increasing residential segregation, but that that becomes a problem only when places that are highly segregated end up becoming economically depressed for generations of immigrants.

“Here I would say the track record in California has been, so far, that we see pretty strong improvements from the first generation to second generation,” he said.

Watsonville, where 40 percent of the residents are foreign born, is in the early phase of the transformation. The community has a 23 percent unemployment rate, and poverty rates twice as high as the rest of California.

Nahara Villalobos, 17, who will be a senior at Watsonville High School this fall, is determined to move up, educationally and economically. Her parents immigrated to California from Mexico about 25 years ago. Her father works on a mushroom farm and her mother is a housewife, caring for Nahara’s disabled older sister.

Although she was born in the U.S., Nahara didn’t learn English well until she was 9, and to this day she acts as her family translator at doctor appointments, signing leases, filling out contracts and tax forms.

When her family moved onto an all-white block five years ago, it was Nahara who had to explain to her father that neighbors were asking if he was an ex-con, and her mother if she was the housecleaner.

“You wouldn’t believe the way the neighbors treated us,” she said. “I’m going to get out of here, be the first in my family to go to college, become a lawyer. I’m not just saying this. I’m going to do it.”

A member of the Watsonville Youth City Council, Nahara interned this summer at City Hall, and serves on her school’s Conflict Resolution Team.

At the courthouse on the corner, interpreters are at work in all four courtrooms, helping judges and lawyers communicate with clients dealing with everything from divorce settlements to murder charges. At the public library, laughter, stories and music ring out from Bilingual Toddler Time.

Nahara points to El Charito market where she and her friends buy sweet, spicy, salty tamarindo and Chamoy candies during lunch.

In the fields surrounding the town, workers are in the fields before dawn, bending over in torn jackets, hats and high collars to keep off the sun, digging up carrots, bundling kale.

Current Mayor Lowell Hurst, who is not Hispanic, said in his 30 years in Watsonville, the community has changed a lot.

“We have more people that probably lack legal status and that means more people that are really kind of living in the shadows,” he said. “Certainly there’s been white flight from this city as people’s economic status improves and they wish to have better opportunities.

He added: “But do people flee because of race or language? I don’t know.”

Hurst said many residents appreciate the Latino influence. “I think a lot of people would like to put the differences of race on the back burners and focus more on economic opportunity and celebrate the diversity of cultures that exist,” he said.

As generations pass, towns like Watsonville will become more Americanized, but at the same time some parts of Mexican culture are already weaving into the U.S. fabric, said University of California, Irvine sociologist Susan Brown.

She points to salsa, which long ago surpassed ketchup as the nation’s leading condiment. And Brown said American icons like hot dogs and hamburgers are actually the legacy of a wave of more than 5 million German immigrants more than a century ago.

“This Mexican wave is a big group,” said Brown, “but we forget that a huge, huge number of Germans came, and we’ve absorbed them.”