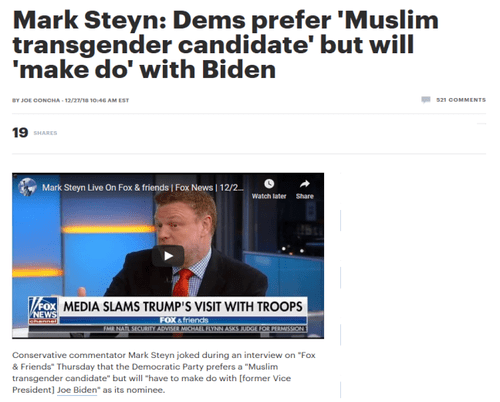 Patrick J. Buchanan: 2020—Year of the Democrats? Maybe Not

If Democrats are optimistic as 2019 begins, it is understandable.

Their victory on Nov. 6, adding 40 seats and taking control of the House of Representatives, was impressive. And with the party's total vote far exceeding the GOP total, in places it became a rout.

In the six New England states, Republicans no longer hold a single House seat. Susan Collins of Maine is the last GOP senator.

In California, Democrats took the governorship, every state office, 45 of 53 House seats and both houses of the legislature by more than 2-to-1. In the Goldwater-Nixon-Reagan Golden State bastion of Orange County, no GOP congressman survived.

Does this rejection of the GOP in 2018 portend the defeat of Donald Trump in 2020, assuming he is still in office then?

For consider. Nancy Pelosi may want to close out her career as speaker with solid achievements, but she could face a rebellion in her party, which is looking to confront and not compromise with Trump.

The national debt may be surging, but Capitol Hill progressives will be demanding "Medicare-for-all" and free college tuition. Trump-haters will be issuing reams of subpoenas and clamoring for impeachment.

Other Democrats, seeing the indulgent attention their colleagues are getting from the media, will join in. Chairman Jerrold Nadler's House Judiciary Committee may have to accommodate the sans-culottes.

Is this what America voted for?

By the Ides of March, a dozen Democrats may have declared for president. But looking over the field, no prospective candidate seems terribly formidable, and the strongest, unlike Barack Obama in 2008, are too old to set the base afire.

According to a USA Today poll, 59 percent of Democrats say they would be "excited" about "someone entirely new" leading the party in 2020. Only 11 percent say they would prefer a familiar face.

Yet, who did these same Democrats view most favorably? Joe Biden, a 76-year-old white male first elected to the Senate when Richard Nixon was president.

Biden polls better than any of his rivals, with 53 percent of all Democrats saying they would be "excited" about his candidacy, and only 24 percent saying he ought not run a third time for president.

The candidate who comes closest to Biden in exciting the base is 77-year-old Vermont socialist Sen. Bernie Sanders. Bernie's problem?

Almost as many Democrats believe he should not run again as would be excited about having him as nominee.

As for Elizabeth Warren, the USA Today Poll must be depressing news. Twenty-nine percent of Democrats would be excited about her candidacy, but 33 percent believe the 69-year-old Massachusetts Senator should not run.

Beto O'Rourke, the three-term Congressman from Texas who put a scare into Sen. Ted Cruz in November is less well-known than Bernie or Biden. But those excited about an O'Rourke run outnumber those who think he should not run.

Senators Kamala Harris and Cory Booker, both African-American, are less well-known but have more Democrats excited about their running than are opposed to it.

However, as Harris is from California and Booker from New Jersey, both blue states that Democrats are almost certain to carry in 2020, and both are from a minority that already votes 90 percent Democratic, even their appeal as vice presidential nominees would not seem to equal that of O'Rourke or Sen. Sherrod Brown of Ohio, who won re-election while his state was going Republican.

A Biden-Brown ticket would present problems for the GOP. But could a Democratic Party that ceaselessly celebrates its racial and ethnic diversity and appeal to women and millennials get away with nominating a ticket of two white males on Social Security?

Other problems are becoming acute within the Democrats' coalition of blacks, gays, Asians, Hispanics, women and LGBT, fraying the seams of the party.

Asian-Americans who vote Democratic nationally are growing bitter over diversity policies in the Ivy League and elite schools that admit black and Hispanic students over Asian students with far higher test scores.

Elizabeth Warren opposes BDS, but also opposes efforts to punish those who champion BDS. "I think the boycott of Israel is wrong," said Warren at a town hall meeting, but added that "outlawing protected free speech activity violates our basic constitutional rights."

In identity politics, loyalty to race, ethnic group and gender often trump the claims of party. The diversity Democrats celebrate is one day going to pull their party apart, as the social, cultural and racial revolutions of the 1960s pulled apart the party of FDR and LBJ.