We’ve been following Southern Baptist Convention leader Dr. Russell Moore [Email/Tweet him] for years, and the fact that his job is on the line for his hatred of Trump is one more example of “So much winning you may get bored with winning.” Not bored yet!

The backlash against the conservative evangelical leader reveals deep tensions in his denomination.

On Monday, The Washington Post reported that Russell Moore—the leader of the Southern Baptist Convention’s political arm—might lose his job. The denomination’s executive committee had asked Moore for a private meeting to discuss an unfolding controversy: More than 100 churches are considering cutting off funding from the Convention, according to the Post, and the influential Prestonwood Baptist Church in Texas announced in February that it will temporarily withhold roughly $1 million from the Convention’s cooperative mission programs. The executive committee has recently begun an investigation into why these funds are being withheld.

The proximate cause for the backlash is the election: Moore was hypercritical of Donald Trump, while roughly 81 percent of white evangelicals—which includes a lot of Southern Baptists—ended up voting for the president. Page told the Post, “If the meeting doesn’t goes well, I’m fully prepared to ask [Moore] for a change in his status.”

While the controversy might seem like routine bureaucratic in-fighting in the country’s largest Protestant denomination, it is symbolic of deeper tensions. “The SBC is in the middle of a huge identity crisis,” said Dave Miller, the senior pastor of Southern Hills Baptist Church in Sioux City, Iowa, who edits the blog SBC Voices. “We don’t know who we are.” [More]

Apparently, a lot of them think they’re Americans.  If the Atlantic is defending Moore, it's obvious that he's not a good conservative, a good Christian, a good Southern Baptist, or a loyal American, because if  he were any of these, the Atlantic would be attacking him. The best you can say about Moore is that he's a cuckservative—as proof of that, Rod Dreher is defending him:

If the Southern Baptist Convention fires Russell Moore, it will do grave damage to its witness & its future: https://t.co/VHAon47Fa0 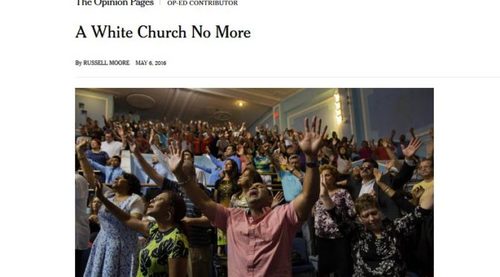 After the Trump candidacy, Dr. Moore considered the Southern Baptist organization a machine for defeating Trump. See Moore is the author of A White Church No More, May 6, 2016, an attack on Trump, on the Historic American Nation, and of course, his own church. Steve Sailer blogged on it as NYT: Dark-Skinned Jesus Will Send Whites Who Vote for Trump to Hell.

Here's something President Trump tweeted during the campaign, after this particularly brutal and un-Christian attack by Moore:

Soon Moore may be a nasty guy with no job. So much winning!