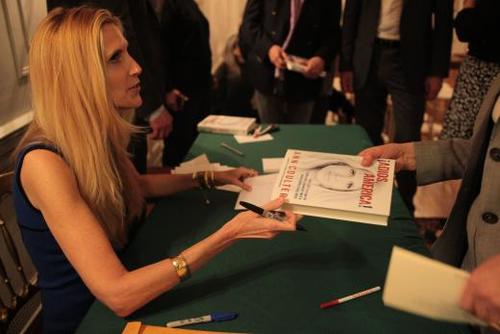 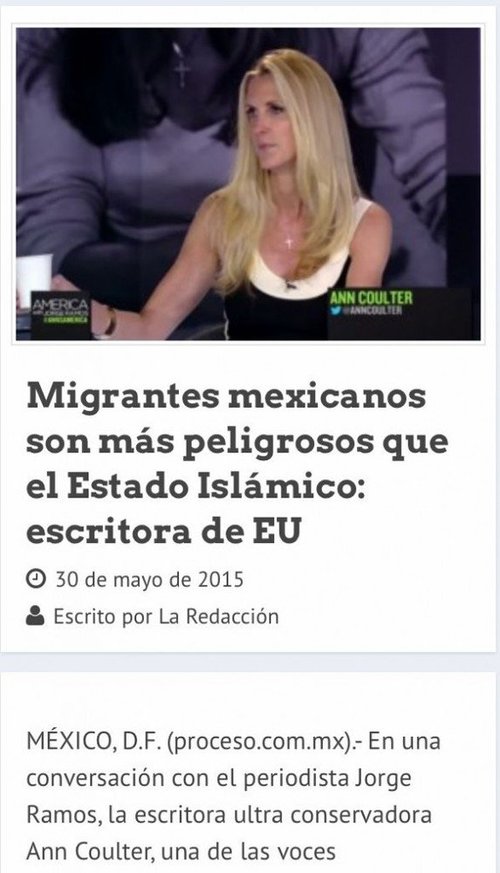 The firestorm surrounding Ann Coulter’s ¡Adios, America! has spread below the border, to Proceso, a prominent Mexican news magazine. What’s really interesting is the long comments thread: it’s very bad news for anyone foolish enough to believe (as our Main Stream Media and political elite apparently do) that Mexicans like America—or that Mexican immigrants have any intention of assimilating.

The Proceso article, [Migrantes mexicanos son más peligrosos que el Estado Islámico: escritora de EU (“Mexican migrants are more dangerous than the Islamic State: US Writer”), May 30, 2015] was based on only one segment of Coulter’s combative interview with Fusion’s Jorge Ramos. The comments were mostly from Mexicans in Mexico, with a few from Mexicans abroad and some non-Mexicans. The same arguments popped up again and again—indeed, I was already familiar with them from reading the Mexican media. (Translations and hyperlinks mine).

Ann (and her late mother) came under intense personal attack. Ann was called stupid, racist, fascist, Nazi, KKK and a Hitler relative (?). One commenter called her an “analfabestia”, a combined form I’d never seen before. (It means “illiterate beast”). Another said she shouldn’t be allowed into Mexico, and if she came, she should be kidnapped. (Carlos Rf, May 30, 13:05) hoped that a black man would rape and inseminate her. Antonio Calderon (May 30, 18:10) said:

The frustration that her extreme ugliness of body and soul provokes has surely conditioned here extreme manner of thinking, of labeling entire cultures and proposing their extermination…

Extermination? When did Ann call for that? Oh yes, just advocating immigration restrictions means you’re a Nazi. One commenter said Ramos was wrong to even give Ann a voice, another said he should have bashed Ann’s ancestors more (!).

Still, another did call both Ramos and Coulter attention-seekers and asked why Ramos was seemingly so uninterested in improving Mexico.

Many commenters admitted that there were Mexicans doing bad things in the U.S. but insisted that Americans should not make generalizations anyway. (Of course, this doesn’t answer why Americans should bring in anyone likely to cause problems). Some commenters complained that Americans blame Mexicans immigrants for problems caused by non-Mexican Latinos—Mexicans generally take a dim view of Central American immigrants. (Perhaps, but cutting off immigration from all countries would solve that problem.) American social problems were brought up again and again: school shootings, serial murders, drug abuse, junk food and war veterans who kill people. We’re also stupid. Hiroshima, Cuba, Vietnam, Iraq etc. The U.S. was called the biggest perpetrator of genocide in history, worse than the Nazis. Republicans were said to be “more dangerous than Mexicans.” Ann was said to be “racist like many Republicans”. 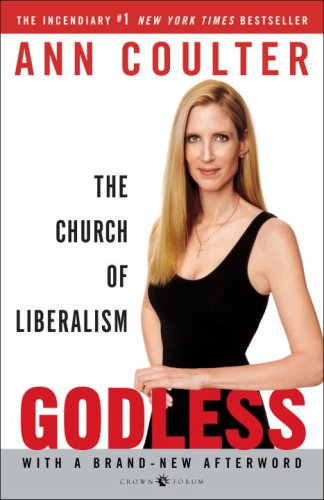 Ann’s faith was constantly attacked. How could she wear a cross and be “racist?” One commenter said she wasn’t worthy to wear the cross. Incredibly, several commentators described Mexicans working in the U.S. as being a form of slavery. Spring Breakers were a particular target. One commenter (Gaston Henry Caporal Cerezo) even went so far as to say that Americans he saw in Mexican resort towns were “the scum of humanity”.

Now, I’ve pointed out myself that some Spring Breakers behave inappropriately. But Spring Breakers only spend a week in Mexico. Many Mexican criminals are permanently residing in the U.S.

The Mexican government came in for its share of the blame, especially the governing PRI party. But some commenters blamed the U.S. for the bad state of the Mexican government. Very many commenters went on about white settlers and American Indians—failing, of course, to mention that Indians are generally at the bottom of Latin American societies. Thus Vicente Franco (May 30th, 17:51) said:

If you feel invaded then return to where your ancestors came from, by the Atlantic Ocean. These lands were ours when they arrived invading, annihilating Indians and then Mexicans…

By the way, Franco currently resides in the United States. Dolores Mendoza (May 30th, 20:37) wrote that

I’ve only been to the U.S. once, and I could perceive that there was not a pure culture, I’m not even sure I’m right , but that’s not important. … The true culture….is what has been constructed by the millions and millions of immigrants that form that country and that come from Latin America.

Repeatedly, commenters complained about the American annexation of the Southwest following the Mexican War. The “Gringos Stole Our Land!” narrative is deeply engrained upon the Mexican psyche. You think they all forget it when they cross the border?

Indeed, open advocacy of Reconquista was common. For example, Alejandro Carrillo (May 30, 12:48) declared:

This is the true vengeance for the territory that belongs to us, now we are inundating it with more paisanos and soon, very soon, it will be Mexican territory or at least have a majority of Mexicans. They are right to fear us!

[T]he nearly 50 million Mexicans on the other side are not out of place, but we are from here, they robbed what they should not have, and constructed where they shouldn’t have It’s only a question of time and we will give the turn to the tortilla…nobody cares about your culture, in fact, what culture? ….f— you! Ann coulter if you don’t like our America go back to England or wherever you coming from.

[T]he gringos should fear the consequences of their actions, because the stolen territories are now being repopulated by their original inhabitants… [The U.S.] will become a mestizo culture, by the mixture of races... poor gringos are going to become what they hate so much.

[E]very day Mexicans and Latinos prepare in universities to take important roles….when a Mexican or Hispanic becomes president in about 40 yearS, let the racists tremble….they will be ruled by a Latin culture where the family is numero uno.

If we go to the other side of the river it’s not that we want to become gringos, it’s just that we are recovering the territory that they took from us…

Chavez works for the National Presbyterian Church of Mexico—proving that Mexican Protestants can also be Reconquistas in good standing. It’s not an uncommon view that the success of the U.S. is thanks to Mexican laborers. Americans, after all, are too lazy to work. As “Marco” (May 30, 20:29) put it:

If it weren’t for the nearly-slave cheap labor in the United States, the country would not be so powerful and progressive as you have been always…most of what is consumed in the U.S. is manufactured or harvested in Mexico…

Mexicans have completely swallowed the “Nation of Immigrants” myth. And, since the U.S. is a “nation of immigrants,” we have no right whatsoever to stop anybody from entering. As one commenter said, everybody’s an immigrant except American Indians—and Mexicans who lived in the Southwest.

Some commenters went further, declaring that the U.S. has no culture, history or identity of its own—so anybody can move in and establish his own culture there. As Ponchin Peregrino (May 30, 17:41) said: “the U.S.A. is nobody’s and is a country of immigrants.”

This, of course, is the logical end of the “nation of immigrants” mythology.

But other readers recognized the Anglo-Saxon origins of the United States—they just don’t like it. One said the U.S. was founded by “the scum of England”. (If true, a remarkable accomplishment! According to Cuauhtemoc Miranda Jaspeado (May 30, 12:24):

[T]he Anglo-Saxon culture is the most predatory culture, a murderous culture that goes spreading death throughout the world… this culture should be extinguished…

Doesn’t much sound like they want to assimilate. In the Spanish-language media, América is the entire Western Hemisphere. Therefore, everybody born in the hemisphere is an américano. This matters to Mexicans. Thus, Marcos (May 31, 13:48) said Americans “believe that their country is America, they don’t conceive that they are a group of territories and that they don’t even have a name.”

Still, I did note two other interesting reactions:

A few readers did say they should try to improve Mexico. One commenter even had a novel suggestion: make Mexico self-sufficient and then close the northern border and keep the gringos out! And there were a few readers who agreed at least partially with Ann.

Cheko Grana (May 30, 12:20) attracted the most attention by saying he partially agreed with Ann, having lived in a Mexico barrio in the U.S., which he hated. He eventually moved to a white neighborhood, where he was accepted.

Everybody here feels offended by the words of this writer and they attack her because they know she is right. Besides, if they feel such disdain for this nation of immigrants, why don’t they return to theirs?

I wanted to hear somebody dare to say what this lady says is a lie. Unfortunately it’s the sad reality—that’s what we are….This lady put Jorge in his place, and I for my part congratulate her.

What can we learn from all of this? The intellectual culture in Mexico militates against most Mexican immigrants assimilating.

There is intense hostility to the U.S., inflated assessments of Mexican contributions—and outright plans to take over part or all of the country.

It’s yet more evidence that Ann is right: we need an immigration shutdown.