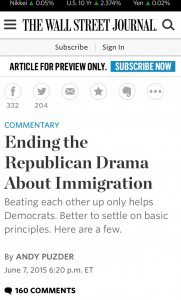 Andrew Puzder, CEO of the blandly named CKE Restaurants conglomerate which owns Hardees, Carl’s Jr. , and other fast food companies, recently published a call for “Ending the Republican Drama About Immigration” in the Wall Street Journal. [June 7, 2015]. Naturally, by “ending the drama” Puzder [Email him] meant embracing Amnesty and mass immigration. Yet Puzder found it necessary to couch his anti-American argument in conservative trappings—a sign that that even plutocrats in the Wall Street Journal now feel obliged to mask their true intentions.

A CEO promoting cheap labor in the Wall Street Journal is hardly newsworthy. But like Sherlock Holmes’s dog that didn’t bark, the interesting part of Puzder’s argument is what he didn’t say. Despite stressing the importance of winning the 2016 election, Puzder made no mention of the Hispanic vote, nor did he drone on about “labor shortages” and the need for immigrant entrepreneurs.

Instead, he argued for a set of shared principles that all conservatives could agree on, made no explicit reference to legal immigration increases, and even called for ending chain migration.

Unfortunately, a closer look reveals his specific proposals are all either identical to the positions of President Obama and the Gang of 8 or in direct contrast to his supposed conservative principles.

What are the common sense principles Puzder says we can all agree on?

Puzder leads off with this red meat for conservatives and I fully agree. However, he is arguing with a straw man. As bad as President Obama has been, he has not tried to put the United Nations in charge of our immigration policy. And while I have no love for the United Nations, I don’t think Ban Ki-moon’s immigration policies would be any worse than Obama’s, or for that matter, Jeb Bush’s. Once again, this is tough rhetoric with little substance. For example, when President Obama enacted his Executive Amnesty, he claimed it would also involve “cracking down on illegal immigration on the border” and deport “terrorists” and “gang members” [Fact Sheet: Immigration Accountability Executive Action, The White House, November 20, 2014]. Of course, Obama hasn’t actually done anything to support border security and even tells outrageous lies like claiming the nonexistent border fence is “basically complete” [Obama says the border fence is ‘now basically complete,’ by Robert Farley, Politifact, May 16, 2011].

Puzder has the same problem. He says he wants “security,” but doesn’t give any details or specific proposals about what that means.

Where have I heard that before? When President Obama enacted his Executive Amnesty he said, “Even as we are a nation of immigrants, we’re also a nation of laws.” The President suggested his respect for the rule of law was proven because he has not yet let every single gang member or terrorist receive Amnesty [Remarks by the President in Address to the Nation on Immigration, The White House, November 20, 2014].

Puzder uses the same trick. He argues that there should be “a universal verification system so employers can be sure they are hiring employees legally.” But there already is “a universal verification system” called E-Verify. The problem is that too many employers—including Puzder’s own corporation—do not use it. Moreover, some of Puzder’s largest franchise owners openly admit to hiring illegal aliens [Arizona’s Illegal Immigration Laws Put to the Test, PBS News Hour, June 11, 2008]. That’s why E-Verify should be mandatory—which, as you might expect, Puzder did not advocate.

After these three empty “principles,” which most immigration patriots would support in theory, Puzder gets to the real point of his op-ed: praising legal immigration and Amnesty.

In essence, this is not a unifying principle, as it leaves the most important question in our immigration policy—how many people we let in—up in the air. And Puzder does not even consider the possibility that we are letting in too many people.

Puzder states: “Legal immigration should focus more on what workers can contribute to the economy, as is the case in most other nations, and less on distant familial relationships.” Most immigration patriots would indeed agree that eliminating chain migration is a good thing. But Puzder slyly implies low skilled immigration would help the economy.

Most immigrants manage to find jobs. In fact, as Puzder noted in a previous column, in the “past decade [immigrants] have accounted for more than half the increase in the size of our labor force,” which he apparently saw as a good thing [How to renew the American dream, by Andrew Puzder, Politico, January 24, 2013].

But when you allow peasants from Central America to bring in their children, siblings, and parents and simultaneously flood the labor market, most of these immigrants who work will end up in low-wage occupations—like, for example, working at Hardees. For that matter, you’ll force many lower class Americans into the same position.

Thus while the principles of getting rid of chain migration and of immigration serving the national interest sound great, in practice Puzder is promoting the same old increase in low skilled immigration.

And not surprisingly, this is the very policy that best serves the interests of his corporation.

Puzder argues: “Whether candidates support requiring people who are here illegally to return to their home countries to become citizens, or whether they propose allowing immigrants to remain in the U.S. and go through an arduous naturalization process, the privilege of citizenship is something worth protecting.”

However, if the obvious alternative— that illegal immigrants should never become citizens—is not even to be considered, then citizenship becomes a right, not a privilege—and manifestly a right of limited value that is easily obtained.

Furthermore, Puzder’s proposed combination of a slap on the wrist, Amnesty, permission to work and access to welfare benefits is hardly part of “an arduous naturalization process.” And, again, Puzder’s recommendation is all but identical to President Obama’s. After all, President Obama said his Amnesty would “hold undocumented immigrants accountable before they can earn their citizenship; this means requiring undocumented workers to pay their taxes and a penalty, move to the back of the line, learn English, and pass background checks” [Fact Sheet: Fixing our Broken Immigration System so Everyone Plays by the Rules, The White House, January 29, 2013].

Still, while I expect this type of wordplay from politicians, businessmen are usually more frank about their blind greed and contempt for American workers and Republican voters. Yet, despite the increased power of GOP mega-donors, more and more Republican politicians like Scott Walker and Rick Santorum are calling for pro-worker immigration policies.

Immigration patriots should be heartened that cheap labor profiteers, despite their billions of dollars, now have to obfuscate their agenda in the pages of the Wall Street Journal.

All we have to do now is get people to live up to their own rhetoric, which, unfortunately, is easier said than done.