Here’s a shocker—INEGI [Instituto Nacional de Estadística y Geografía, the Mexican census bureau] has discovered light-skinned Mexicans earn more than dark-skinned Mexicans! But haven’t we been told Mexicans aren’t like those racist Americans? Isn’t Mexico proof that race-mixing will eventually solve all race problems?  As an American who lived in Mexico for years, let me assure you—that’s baloney.

Mexicans and other Latin Americans have plenty of racial issues, and they didn’t get them from us. By importing Latin Americans, we’re simply adding new racial tensions to those we already had.

Most Mexicans are indeed racially mixed. But race still matters in Mexico, even as Mexicans themselves may deny it. Mexicans freely discuss discrimination by class, but few acknowledge how social classes are organized by race.

They deny this truth for several reasons.

There is also an African element among Mexicans, but it is often ignored. Africans mostly mixed into the general population but recognizable Afro-Mexicans can be found in some coastal regions of Mexico. (Dr. Bobby Vaughn, an African-American anthropologist, is one of the scholars who has studied the Afro-Mexican population.)

Generally, in Mexican society, the higher you go up the socioeconomic ladder, the whiter the Mexicans.  The wealthiest Mexicans are of mostly European ancestry, with a few of Lebanese or Jewish descent.

Most famous actors, pop stars and beauty queens are mostly white, as whiteness is the standard of beauty in Mexican society. (Right, Jimena Navarrete, Miss Mexico and Miss Universe 2010.) During my first teaching job in Mexico, a fifth-grade boy told me the darkest-skinned girl in the class was the ugliest. These kinds of views, I learned, were typical. INEGI is “shocked, shocked” to discover this, but I could have told them years ago. 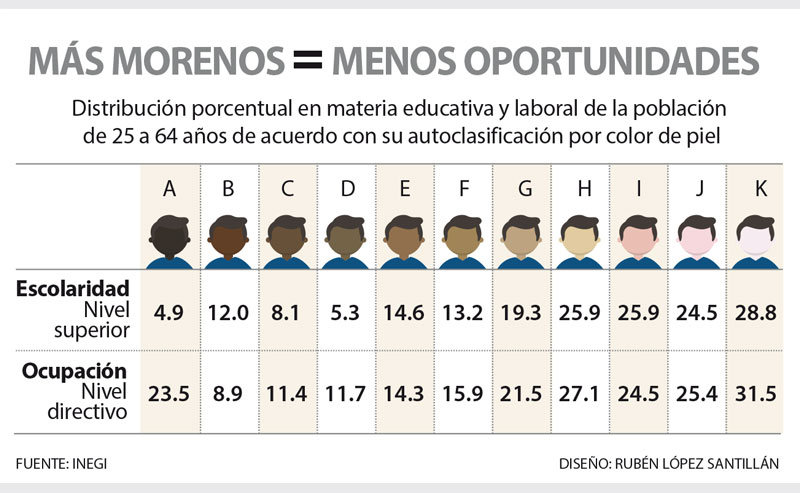 Skin color in the adult population is a determinant of the well-being and social position that persons reach in Mexico. According to the results of the first Module of Intergenerational Social Mobility, carried out by INEGI, the lighter the skin color, the more opportunities to have better-paying jobs and better and better management positions. The darker the skin, the lower the pay and fewer opportunities to obtain positions classified by INEGI as “managers, bosses and professionals.”

That is, in Mexico, better jobs are given to employees, more for the color of their skin than for their skills.

But what about those who have both the skin color and the skills? The study showed education level was also linked to skin color, with dark-skinned people having less formal education. There were also occupational differences. INEGI found 13.9% of those with dark skin got management positions, while 27.1% of the light-skinned did.(See the INEGI press release here.)

This was an intergenerational study, and unsurprisingly, showed an influence of parents on educational levels. Those with a higher degree of education were more likely to have well-educated parents or parents in management.

Of course, you also get your race, skin color and inherent characteristics from your parents’ genes. This study puts us back in the old nature-nature debate.

Although the Mexican racial hierarchy has always been obvious, it is genuinely revolutionary that the topic is being openly discussed.

What will come of it? Another Dinero en Imagen article by Paulo Cantillo a few days later blamed “discrimination” for the class differences [Gana más la población de piel clara: resultado de la histórica discriminación en México, “The light-skinned population earns more: result of the historic discrimination in Mexico,” June 21, 2017]. It reported that INEGI found light-skinned Mexicans were on average in the 58th percentile of income, while the dark-skinned Mexicans were in the 27th percentile, a 31-point gap. Aren’t we always hearing about gaps between groups in the U.S. as well?

Mexican sociologist Patricio Solis of El Colegio de México, who was part of the INEGI Project, was quoted saying: “The gap reflects inequalities accumulated during years in other ambits of people’s lives, who historically have been discriminated against in the country for the color of their skin.”

Even when the educational and economic status of the parents was controlled for in the study, the gap between the different groups persisted (though it was reduced to 15 points). “This shows that disadvantages persist in the development of the more dark-skinned groups in the country,” claimed Dr. Solis.

Dr. Solis praised the research because it created an “excellent starting point” for a discussion of discrimination and opened the door to policy changes. “The challenge is to investigate more deeply which practices are the most common discriminatory practices for skin color, how far they go, and in what sectors, and after that to propose changes in laws and in public policies,” he proclaimed.

This may mean Mexico could someday have an Affirmative Action program!  Of course, it would be remarkably complicated.

(If “white privilege” is a thing, then the large multi-racial Latino community has “Latino White Privilege”! Reichard complains that light-skinned Latinos have more education, make more money and are considered smarter. Additionally, “most Latino politicians are light-skinned.” Pictures of Marco Rubio and Ted Cruz are posted to prove the point). (Even these privileged white Latinas have complaints— e.g. being asked "Are you sure you're not adopted?") (Needless to say, so do the dark-skinned ones, including hearing, “But you don’t look Latina” and ““You should straighten your hair. You would look so pretty.”) (Discusses the Caribbean distinction between pelo malo [“bad”—coarse— “hair”] and pelo bueno [“good”—long, thin, glossy— “hair”]. Yes, that’s an issue with some Hispanics. And check out this loaded quote:

Has your mami ever told you to “cover up” or be “extra careful” when walking near Afro-Dominicans or brown Central Americans?

Ever wonder why she’s less concerned about your safety when the light-skinned Argentine is the one cat-calling?”

Now that’s a Pandora’s box if there ever was one!)

American politicians have, in recent decades, allowed the importation of millions of Latin Americans and encouraged them not to assimilate. Did they consider the fact that Latinos have all sorts of racial and social tensions that we Americans will now have to deal with?

Instead of moving us “beyond race” and into greater harmony, America’s demographic transformation is simply leading to more division and conflict.

But, to our rulers, is that a bug or a feature?