Allan Wall: My Latest Visit to Mexico—And What I Heard About Trump There

I returned several days ago from a spring break trip to Mexico, you can read my Mexidata column about it here.

The Mexican media is not letting up on Donald Trump. There was something about Trump in the paper every day.

As for television, I only watched the nightly TV news one night. On that night, both major networks (Azteca and Televisa) were bashing Trump. There was no attempt at any sort of balance.

On Azteca the broadcast reported Donald Trump and his “discourse of hate”. They included an interview with New York Mayor Bill DiBlasio, of all people, to slam Trump.

The other network, Televisa, called Trump “racist” and “fascist”.

Televisa also included an interview with five pop stars (three  Mexicans, a Spaniard and a Colombian) who are on La Voz México, a singing competition type of reality show.

As part of the interview, the anchorman asked all five of them what they thought of the Trump candidacy, and what a shocker—all five lambasted Donald Trump. 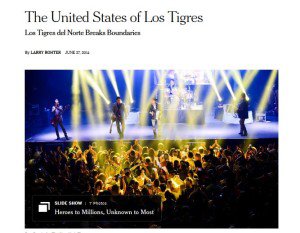 Longtime VDARE.COM readers may recall my article about the Tigres and their reconquista anthem Somos Mas Americanos. In 2013, the group played at a pro-amnesty rally in Washington, D.C. (See “SOMOS MAS AMERICANOS”—We Are More American! and Los Tigres Del Norte—Reconquistas, But WASHINGTON POST Didn’t Notice.)

So it was a given that the Hernandez brothers were going to bash Trump.

The Mexican media and political and academic class are dead set against Trump, and just as our own elite, they are going to do everything they can to stop him.

Despite the ongoing barrage of Mexican anti-Trump propaganda, every individual Mexican is not against Trump. I heard one person point out that Trump makes a distinction between illegals and Mexicans in general. Another said he understood that Trump was defending his own country.

Some of our party even encountered a Mexican taxi driver who asked them who they were supporting for president, upon which the taxi driver announced that he was for Trump!