In Mexican culture, the color line is sharp. The elite political class is comprised of light-skinned European-descended persons, and it is very hard for a dark Mexican to be elected presidente. In 2005 paleface Presidente Vicente Fox angered many black Americans when he said that illegals take jobs “that not even blacks want to do.” Another race-based controversy was created by Mexico’s issuing postage stamps based on a comic character Memin Pinguin which is a caricature considered objectionable by some.

In Mexico, the National Council to Prevent Discrimination (Conapred) is running a campaign to fight racism in the country, which is funny since Mexican illegal aliens in America have consistently employed the bogus complaint as an excuse for their lawbreaking.

The Mexicans borrowed from the Clark doll preference experiment that figured strongly in the Brown vs. Board of Education Supreme Court decision. The results showed Mexican mestizo kids liked the white doll better and thought it was more like them than the black one. 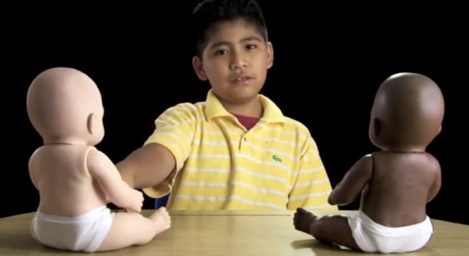 An interesting point that might be overlooked is the remark of one boy who responded as he pointed to the white doll, “I am not afraid of whites. I have more trust.” His simple explanation points to the tribal nature of human beings which is based upon the safety that the group provides. We normally prefer to be around others who share our language and values because of the safety component, which is hard wired and deep.

The multiculti crowd has to propagandize loud and long in schools and the media that diversity is the highest good because diversity ideology runs counter to human nature.

Below is the video prepared by Conapred. Although it is in Spanish, anyone can see that many of the kids respond to the question of which doll is “malo” (bad) by readily pointing to the black doll.

REPORTING FROM MEXICO CITY — Is Mexico’s an inherently racist society? Does the culture overwhelmingly favor those with light skin over those with dark skin? And if so, is that a legacy of European colonialism or present-day images in television and advertising?

These are among the thorny questions emerging in online forums in Mexico since a government agency began circulating a “viral video” showing schoolchildren in a taped social experiment on race.

One child in the video with mixed-race features says the white doll resembled him “in the ears.”

“Which doll is the good doll?” a woman’s voice asks the child.

“I am not afraid of whites,” he responds, pointing to the white doll. “I have more trust.”

Mexico’s National Council to Prevent Discrimination, or Conapred, in mid-December began circulating the video, modeled on the 1940s Clark experiments in the United States. The children who appear in it are mostly mestizos, or half-Spanish, half-Indian, and a message said they were taped with the consent of their parents and told to respond as freely as they could.
Mexicans who saw the video said online that they were dismayed but not surprised by its results, and also offered some criticism for the agency that produced it.

Commenters have noted that the options were “very limiting” by offering only black and white, or good and bad, when in Mexico the majority of the population is mixed-race, mostly European and indigenous, and to a lesser extent African and Asian backgrounds.

“It is a poorly formulated question, it is pretentious,” one user said on the website VivirMexico (link in Spanish).

Yet many also said the video reveals a deep-seated prejudice that is taught to children in Mexico from an early age.

In 2010, the Televisa network was criticized for showing actors in black face during the World Cup in South Africa. In May, the case of a black man who died after a confrontation with police in Mexico City led to protests against Mayor Marcelo Ebrard.

Wilner Metelus, a sociology professor and leader of a committee advocating for Afro-Mexicans and black immigrants, said the doll video shows how far the country must go to recognize the prevalence of racism and the need to educate young people.

“The Mexican state still does not officially recognize Afro-Mexicans. There are few texts that talk about the presence of Africans in Mexico,” Metelus said. “We need a project in the schools to show that the dark children are just the same as them, as the lighter children. And not only in schools; it is also necessary in Mexican families.”

On Friday, the daily La Jornada published a report saying black immigrants in Mexico and the Afro-Mexican minority still suffer racism and discrimination that is not adequately acknowledged by the government (link in Spanish).