Memo From Middle America | If Diversity Is Strength, Why Is Iraq Breaking Up? 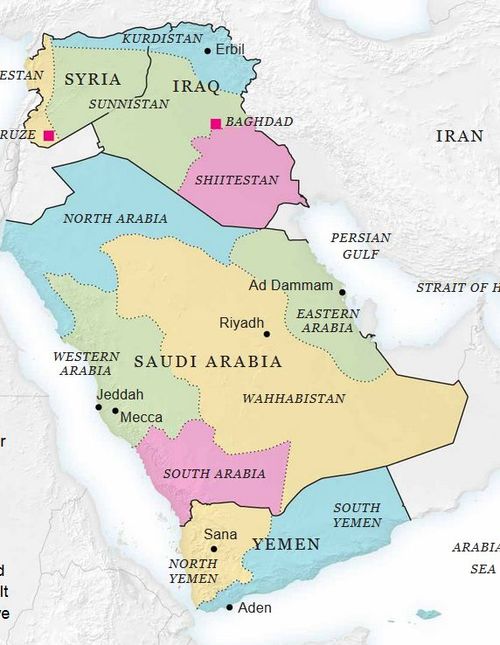 See also: Demography Is Destiny—In Crimea And In The U.S., By James Kirkpatrick

Iraq is breaking up. Consider what is occurring:

This is sadly reminiscent of the Fall of Saigon, which ended our Vietnam involvement. It looks as though Iraq, in which the U.S. military invested so much blood and treasure, from 2003 to 2011, is either breaking up, or will have to be put back together with extreme force.

As Mitt Romney, who might be gearing up for another presidential run, put it, “Tragically, all we’ve fought for in Iraq, all that 4,500 American lives were shed to gain, is on the cusp, potentially, of vanishing.” [Romney Blasts Obama's Foreign Policy as 'Monumental Bust, Newsmax.com, July 14, 2014]

Indeed, a number of Iraq vets have expressed sadness at seeing their sacrifices go to waste.

I’m an Iraq vet myself. I did a ten-month Iraqi tour with the Texas Army National Guard. I’m moved by how things are turning out as well. I wonder how the Iraqis I befriended, some of whom were in the Iraqi Air Force, are doing. (For my own summary of my Iraq tour of duty, see Iraq Effort Proves We can Seal the Border – If We Want!January 16, 2006

Inevitably, the “Who Lost Iraq?” arguments have already begun. Unsurprisingly, they take on a partisan edge.

Republicans have been quick to blame Obama for losing Iraq, despite the fact that it was Bush himself, in 2008, who negotiated and signed the Status of Forces agreement, to withdraw in 2011.

What can we learn from this disaster? Besides the fact that our country is long overdue for a top to bottom re-evaluation of our entire foreign policy, there is plenty to learn from it National Question-wise.

American  policy-makers purportedly wanted to reform Iraq and make it a multicultural democracy. But they failed to take into serious consideration the nature of the country itself, with its ethnic and religious divisions; and the nature of Islam.

Iraq is an artificial creation, for centuries part of various Muslim empires, not carved out as an independent state until the 20th century. It was never stable unless held together by force.

Iraq is diverse—and diversity is not strength. It’s an amalgam of ethnic groups, tribes, factions and jostling Islamic groups. “Iraqi” identity is weak. The main groups are the Shiite Muslims, the Sunni Muslims and the Kurds, but even these have tribal subdivisions.

Saddam Hussein, a vile dictator, did hold the country together by force. But then, aren’t most Middle Eastern countries dictatorships held together by force? You should be careful overthrowing a dictator, because you don’t know how things will turn out afterwards.

After Saddam's overthrow, the Iraqi army was disbanded, its soldiers and officers cashiered—some to become insurgents. The power vacuum created by Saddam’s overthrow had to be filled by something.

The U.S. tried hard to create a multicultural democracy in which being Iraqi counted more than being Sunni, Shiite or Kurd. Steve Sailer argued in VDARE.com at the time that partition was a more realistic approach. And, indeed, the U.S. does not appear to have succeeded. Even the much-vaunted Iraqi elections were dominated by ethnic identities—see these articles I wrote from Iraq: National Question Real Victor in Iraqi elections and Iraq Proves Diversity Not Strength but Weakness. So Why Import It?

What does all this have to do with us? This could never happen in the United States of America, right? America is just so exceptional that we would never fall apart like this—would we?

I wouldn’t be so sure. After all, America is transforming into something different, and our previous history is not much of a guide for might occur in the future. When you have a  significant population in your country that doesn’t identify with the nation, you can expect problems. Your country may break up, borders may be redrawn, or it may have to be held together by force. But it won’t remain the same.

So how do we know that something like what’s occurring in Iraq, or in Ukraine, or other troubled places in the world, can’t happen in the United States?

Consider the current ingredients in the explosive cocktail that is today’s America. “Diversity” is the reigning ideology. Simultaneously, the historic Anglo-European majority is dwindling, and the current system is rigged against it.

Minorities, meanwhile, are encouraged to agitate collectively. In particular, a burgeoning Latin American population is being encouraged to think of itself as “Hispanic” although most are Mexican, and to assert its group rights, some flagrantly revanchist.

On top of it all is the Obama administration, a Minority Occupation Government openly hostile to the historic American nation.

Yes, what could possibly go wrong?