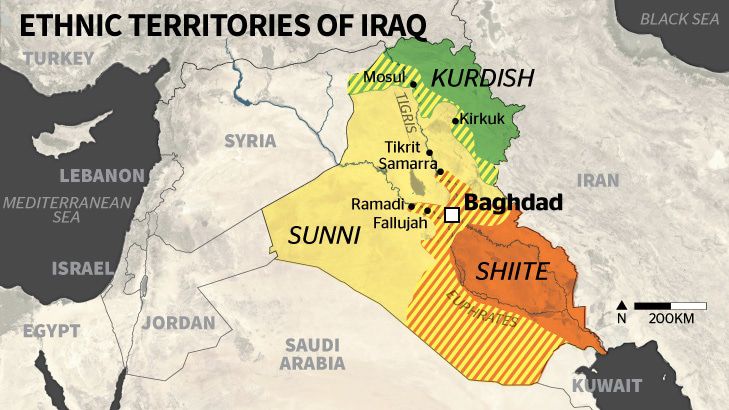 One measure of how bad the situation has gotten in Iraq: the foreign policy establishment is beginning to mention the P-word:

Leslie H. Gelb, president emeritus of the Council on Foreign Relations, has even argued in the Nov. 25, 2003 New York Times that

"President Bush's new strategy of transferring power quickly to Iraqis, and his critics' alternatives, share a fundamental flaw: all commit the United States to a unified Iraq, artificially and fatefully made whole from three distinct ethnic and sectarian communities. That has been possible in the past only by the application of overwhelming and brutal force… The only viable strategy, then, may be to correct the historical defect and move in stages toward a three-state solution: Kurds in the north, Sunnis in the center and Shi'ites in the south." [The Three-State Solution, Leslie H. Gelb, NYT, November 25, 2003. If you can't access the article in New York, here it is in Kurdistan]

Both partition and the nation-state are viscerally unpopular with global New Class mandarins, from the late Pierre Trudeau on the left to Bob ("I think the nation-state is finished") Bartley on the (very) center-right. There seem to be two reasons: a deep ideological revulsion from the fact of human differences—from the fact that people are not plastic; and a preference for complicated government structures that produce more jobs for intellectuals in the "managing diversity" rackets.

When the setting is favorable for partition, such as in Canada, the bien-pensants uniformly favor multi-ethnic polities. They only turn to the nation-state as a last resort—in other words, when conditions are so desperate that partition probably won't work very well either.

Even when the great and the good are fighting for de facto secession, as in the 1999 Kosovo War, they cloak their actions in paeans to multicultural unity. The result of our interventions in the Balkans was the ethnic cleansing of Serbs from Croatia, the effective partition of Bosnia, and a combination of the two in Kosovo. Yet, Bill Clinton still declared with a straight face, "[T]he principle we and our allies have been fighting for in the Balkans is the principle of multiethnic, tolerant, inclusive democracy."

Baloney. Peace and democracy didn't come to the Balkans until the various states and statelets became monoethnic, intolerant, and uninclusive. But, shhhh, you're not supposed to mention that.

There are about 200 independent countries today, up by almost an order of magnitude over the early 20th Century. So clearly there has been great demand across the human race for more localized rule.

For example, just 100 years ago, there were only two Scandinavian states instead of the five that exist today. Norway broke off from Sweden in 1905, Finland escaped the Russian empire in the nick of time in 1917, and, after a long apprenticeship, Iceland won formal independence from Denmark in 1944.

Decolonization was relatively popular with international elites. But they've repeatedly sniffed at the idea of further restructuring the successor states to allow more ethnic self-expression. Yet there are examples, such as the 1965 split between Overseas Chinese-dominated Singapore and indigenous Muslim-dominated Malaysia. Free of each other, they have separately evolved into the two most successful equatorial countries.

Secession promotes honest government because it makes a people dependent upon their own resources. For example, Slovakia's quasi-communists seceded—more accurately, were evicted—from the wealthier Czech Republic in 1993. After awhile, the Slovaks noticed that they didn't have the Czechs to sponge off of anymore. So they kicked the old Bolshies out and instituted free market reforms that have Steve Forbes drooling.

In contrast, Newfoundland was once far more prosperous than Iceland. But the two North Atlantic island countries have moved in opposite directions since the 1940s. Iceland became independent. Newfoundland joined Canada in 1949. The hardy work ethic of the Maritimes was quickly corrupted by the largesse of the mainland Canadian taxpayers. The Alberta journalistic prodigy Colby Cosh wrote:

"Entire seasonal economies have been built up around Unemployment Insurance eligibility, notably in the Maritime Provinces. Plants and service industries throw open the gates for a few weeks a year, just long enough to get a town full of adults eligible—and then work slows down mysteriously, tragically, as everyone goes home to await their pogey."

Iceland built its own welfare state too. But the Icelanders themselves pay for it, so it has been self-limiting.

The West's experts on Africa have been strongly resistant to the redrawing of the old colonial boundaries, even in an egregious case such as Sudan, where two million have died in the 20-year long civil war. The brown-skinned, Arab-speaking, Muslims from the north and the black-skinned, local language-speaking Christians and pagans from the south have been fighting for most of the 47 years since independence, partly because the northerners capture southerners and make them slaves.

The simple solution would be to let the Southerners vote on whether to secede. This issue will be on the table when peace talks reopen in Kenya this week—but there is essentially zero pressure from the West for this rational step.

In contrast, Sudan's neighbor Eritrea has turned into perhaps Africa's leading success story precisely because of its fervent nationalism. This was nurtured during a long war of secession against its Ethiopian overlord, culminating in legal independence only in 1993.

"While the West promotes democracy, market liberalization, military demobilization, and the muting of ethnic hatreds as necessary to domestic tranquility, Eritrea, at least for the moment, provides a rejoinder to all that. The country has achieved a degree of non-coercive social discipline and efficiency enviable in the developing world and particularly in Africa—and it has done so by ignoring the West's advice on democracy and development, by cultivating a sometimes obsessive and narcissistic dislike of its neighbors, and by not demobilizing its vast army, built up during a thirty-year conflict with Ethiopia, unless there are jobs waiting for the troops."

Kaplan notes that capitalism also works better in Eritrea. Unlike most of Africa, you get a receipt with every purchase because store clerks don't want to rip off their employers who are, after all, their fellow Eritreans.

"Eritrea is like Prussia: a tiny state of hard people who'll take on anybody. The Eritreans rebuilt an entire railroad with their bare hands. Imagine what that must've looked like: hundreds of thousands of ordinary people, whole families, digging rock and hammering track for no pay, out there in some of the hottest, driest, nastiest landscape in the world. And it wasn't because the authorities terrorized them into it: it was for the good of the nation."

Of course, there's no doubt that Iraq presents a particularly difficult case for partition (or anything else). Part of the Fertile Crescent, the original home of agriculture and towns, is on the road to Asia, Europe, and Africa, and thus consists of layers upon layers of ethnicities.

As Gelb says, Iraq basically has three ethnic groups: the Shi'ite Arabs, Sunni Arabs, and Kurds. But there are numerous other groups, notably the Turkomen, who are related to local powerhouse Turkey. The boundaries between these groups are often indistinct and the populations dappled across the map. Finally, each ethnic group is highly subdividable into all sorts of inbred tribes, clans, sects, and extended families. For example, some of the Kurds are not Muslims, but are instead Yezidis who believe in reincarnation, never wear the color blue, and worship Lucifer.

The other major problem is Iraq's abundant oil. Who gets it?

Partition goes most smoothly, as in Iceland, when the departing people take little with them besides their diligence. At the other extreme is the Congo, site of a horrific war that has killed over two million over the ownership of the country's minerals. The people of the Congo produce so little taxable wealth that the politicians hardly care whether they live or die. All that matters to the warlords is who gets to collect the checks from foreign mining interests.

In Iraq, the situation isn't much more promising. Some of the oilfields are in the Shi'ite south, some are in the north, on the border of the Kurds and Sunnis, and there is a potential for new strikes in the largely uninhabited western desert. All this means that war over oil ownership seems possible at some point.

But this war will happen with or without partition.

The great fear implicit in partition is always: Where does it all stop? With Iraq, we simply don't know how far dissolution would go, whether outsiders would be tempted to intervene (notably Turkey, concerned about the precedent for its own Kurds) or what new order would emerge from the process.

But does anyone have any better ideas?