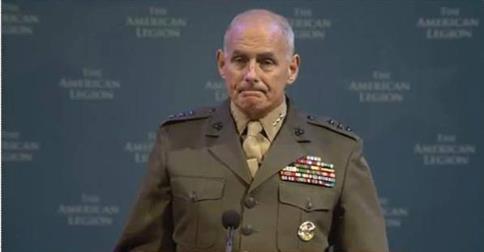 Not surprisingly, the Main Stream Media has avoided Kelly’s comments. As of this writing, only one local CBS station has reported the story. This is particularly shocking because Kelly was a subject of a long Washington Post profile after his son, a Marine lieutenant, was killed in action in Afghanistan in 2010. [Lt. Gen. John Kelly, who lost son to war, says U.S. largely unaware of sacrifice, By Greg Jaffe, March 2, 2011]

Southern Command has responsibility for South America and Central America. Gen. Kelly pointed out what should be the obvious correlation between our porous southern border and national security:

In comparison to other global threats, the near collapse of societies in the hemisphere with the associated drug and [undocumented immigrant] flow are frequently viewed to be of low importance… Many argue these threats are not existential and do not challenge our national security. I disagree.

Gen. Kelly surely is not alone among military officers, past and present, who could offer insight into the border fiasco. But they would have to find time away from the American military’s jihad against gender inequality and sexual assault, in order to uphold their oath to the constitution to “defend the Constitution against all enemies, foreign and domestic.”

That oath is clearly nagging at patriotic officers who see our sovereignty betrayed, and our territorial integrity violated with near impunity. Barack Obama has gradually reshaped the military leadership into, as Nicholas Stix writes, “a politicized, diverse officer corps.” But there are a few leaders left who believe in fighting for the nation – not a modern day Camp of the Saints in the Rio Grande Valley, not a multicultural contingent of globalism, but an actual nation.

Kelly has spoken out before about the border threat, and about the “current cohort of opinion makers and cultural icons” in America who peddle selfishness and materialism. [General: Millennial Marines shun self-absorbed culture,by Rowan Scarborough, Washington Times, May 7, 2014]

The Obama Administration is just a few more exposes away from complete meltdown on the immigration issue. From escorting diseased illegal aliens around the country, to having military bases used to warehouse the unwelcome illegals, the Border Patrol and military are bearing the brunt of this unopposed invasion. The American public needs to know about the Nanny State degradation that our Border Patrol and military are forced to take part in.

For example, the officers and enlisted men at Lackland Air Force Base and Fort Sill, Oklahoma no doubt have something to say about the illegal aliens sheltered on military bases at taxpayer expense. They should report what they are seeing to the independent, non-Main Stream, media. (Email VDARE.com].

Of course, the prospect of an “anti-racism” witch-hunt will deter many from speaking out. Time will tell if Gen. Kelly is to be punished for his surge of common sense.

But Gen. Kelly’s remarks are a reminder that immigration patriots have a compelling argument that would have a receptive audience: we should protect our own borders—rather than using American servicemen to protect other countries that don’t want, need or deserve our help.

Americans are looking a bit closer to home these days. Immigration patriots should drive home the security theme.

One thing that immigration patriots should emphasize more: the need to place U.S. troops, armed and with the power to detain, on the Mexican border. This was something recognized by the late Sam Francis way back in 2002.

Amnesty and protecting our borders are two different issues, but they're not unrelated. By putting troops on the border, the president would not only halt the invasion but also tell the Mexican government that encourages it to stay within its own borders and mind its own business.

With [then] President Fox brazenly threatening to use his own population as a political blackjack to force his wishes on this country, it's well past time for our government to tell him so.

As soon as the alien hordes realize they will not be allowed in, they will stop coming. An armed soldier would send a stronger message than a barely-armed Border Patrol agent. Border Patrol agents are regularly attacked with rocks thrown by the legions of La Raza. A Mexican helicopter fired shots towards U.S. Border Patrol agents. [Mexican helicopter fired shots in Arizona near border, U.S. says, by David Schwartz, Reuters, June 27, 2014] Maybe it was an accident, but the accidents can pressure risk-averse officials into retreating. There would be far fewer such accidents on the border if armed Americans, with the full force and prestige of the military, stood guard at our border.

Border security is no longer an administrative detail. Border security is a national security issue of the first order. There are more Gen. Kellys out there who are ready to serve and defend this nation in the most immediate and practical way possible.

But right now the Obama Regime is undercutting them by essentially inviting an invasion. As Kelly pointed out in his DefenseOne interview, the invaders are taking their cue from the U.S. government:

We should remember that our friends and allies are not the only ones watching our actions closely. … And in the meantime, drug traffickers, criminal networks, and other actors, unburdened by budget cuts, cancelled activities, and employee furloughs, will have the opportunity to exploit the partnership vacuum left by reduced U.S. military engagement.

Kelly is on record, for all who take notice, saying that an open border lets everyone and everything through. There is, in his words,

an incredibly efficient network along which anything – hundreds of tons of drugs, people, terrorists, potentially weapons of mass destruction or children – can travel, so long as they can pay the fare. SOUTHCOM chief: Central America drug war a dire threat to U.S. national security, By Gen. John F. Kelly, Navy Times, July 8, 2014

It will take many patriots like Gen. Kelly coming forward before our lying Main Stream Media and our craven politicians acquire a sense of urgency about the border problem.

But why can’t our GOP politicians highlight these security concerns? They’ve proven adept at ginning up support for all manner of foreign meddling. They shouldn’t have any problem tackling the very real issue of an existential threat to the U.S.