For Obama and the Church Hierarchy, It’s All Going According to Plan

Both Barack Obama and the Roman Catholic Church seem to regard the “Children’s Crusade” from Central America not as an emergency, but as an opportunity. It is now clear that Obama was actually warned about the developing crisis well before it happened. However, the Washington Post article that revealed Obama’s guile seems more outraged that the federal government hasn’t provided more resources for the illegal than it has at the President’s deception. 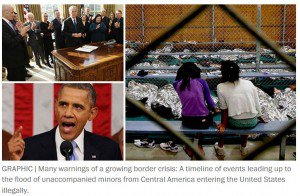 “As soon as those children were placed in temporary shelters, more arrived. An average of 66 were apprehended each day on the border and more than 24,000 cycled through Texas patrol stations in 2013. In a 41-page report to the Department of Homeland Security, the team from the University of Texas at El Paso (UTEP) raised alarms about the federal government’s capacity to manage a situation that was expected to grow worse.”

The article seems to say to me, “Hey, you knew these kids were coming! Why didn’t you build facilities for them? “

Obviously, these “children” could not have arrived without significant help from both our own government and Central American governments. What’s incredible is not that there has been protests—what’s incredible is that there are not more. Don’t we care about our own kids? Don’t we believe in the Rule of Law? Don’t we feel compassion for our unemployed citizens—like the 18,000 employees Microsoft just laid off?

The Obama Administration certainly doesn’t. Instead, they are preparing for more illegals.

“Cecilia Muñoz, Obama’s domestic policy adviser, said the administration and key agencies had made adjustments over time to deal with the influx of children but then responded with urgency once federal officials realized in May that the numbers would far exceed internal projections of 60,000 minors crossing the border in 2014.

Revised Border Patrol estimates now suggest the number could reach 90,000 by the end of September.

The hierarchy of the Roman Catholic Church is also seemingly gleeful about the influx and doing its best to make sure that these “refugees” remain American dependents indefinitely. Pope Francis has already called for America to accept “migrants”—though oddly enough, Vatican City remains immigrant free.

The Church is stepping up efforts to address this crisis and is calling on volunteers, charities and the community to meet the needs of those coming to the border.

“They don’t have much money or clothes … the basic necessities,” said Bishop

Gerald Kicanas, whose Tucson Diocese has been coordinating a major effort with city and county officials, other charities, faith-based groups and members of the community to provide relief to the women and children who come through the Arizona border.

Families with children, Bishop Kicanas explained, are first processed through the Border Patrol, and then they are allowed to place a call to a relative or other verifiable sponsor in the United States. They are released once they have a bus ticket to a “sponsor” family and a scheduled court date with an immigration judge to determine their future.

Needless to say, with administrative amnesty a reality, “immigration judges” can hardly be relied upon to enforce the law. But what’s of more concern is the push by Church officials to actually become a quasi-legal part of the federal government for the purpose of facilitating more Central American immigration.

Bishop Kicanas said the diocese is negotiating with FEMA to get proper clearances for priests to come and say Mass and to even get ministers and counselors in to “allow more spiritual and emotional care for the children.”

The bishop said he would like to see the Church develop some organized programs, even if only a few days long, that can provide some support to the children held by FEMA.

Back in Texas, Sister Norma said she is working on getting the proper clearances and procedures to get the children spiritual support, counseling and a more humane environment.

But she expressed concern that the federal government did not seem as willing to collaborate with churches and charities as they did in the late 1980s, during the last border crisis of migrants fleeing Central America.

Said Sister Norma, “I don’t have the solution, but if it worked then, why can’t it today?”

There are some things that “worked then,” which the federal government should be doing today—namely setting up systems to swiftly deport those who break our laws. But this isn’t what “Sister Norma” has in mind. She wants the federal government to partner with the Catholic Church as a welfare agency to ensure that this influx never ends.

Why not? We might as well make de jure what is already occurring de facto. Both the Catholic hierarchy and the Obama Administration see what is happening not as policy failure, but as successful policy in action. And those who are hurt by it—both Americans and migrants—are simply collateral damage in their pursuit of abolishing the historic American nation and electing a new one.