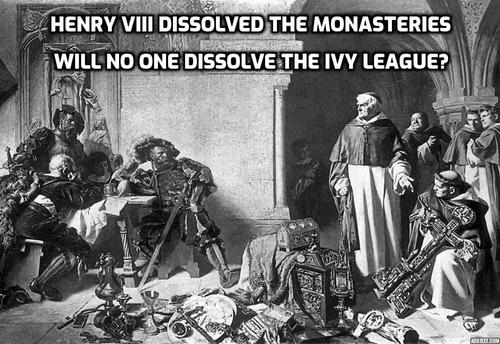 So I sit down after dinner to watch some political shows on TV. What are they talking about? The Mueller Report. Still talking about it, still getting heated about it.  I get to thinking about the opportunity cost of all the anti-Trump passion that is still, after more than two years, roiling our national legislature. Two issues, immigration and Higher Ed, are most urgently in need of legislative and/or Executive Action. We're not getting it, though, as long as so much of our political energy is going into this tiresome campaign to find President Trump guilty of something—anything.

Last week’s turn of events involved U.S. Attorney General William Barr, who is accused of something-or-other to do with the report in some way I can't be bothered to understand. From the little attention I can be bothered to pay, I'm guessing that Mr. Barr, who has a reassuringly ursine look about him, can take care of himself.

Nobody much in Washington, DC seems to be interested in it the stinking, steaming, fetid mountain of dog poop that is our higher-education system. I watched the YouTube video of Education Secretary Betsy DeVos giving a twenty-minute address at the Manhattan Institute on Wednesday. She hardly said anything about Higher Education.

De Vos did remind us, though, that her department is just forty years old this coming October. For the first twenty years of the department's existence the Republican Party went into every election campaign with a promise to eliminate it, but of course nothing was done and the promise has now long since been dropped. The Education Department is in fact a star exhibit for how utterly ineffectual the Republican Party has been at resisting the growth of federal power and spending.[ A Brief History of GOP Attempts to Kill the Education Dept., by Dan Bauman and Brock Read, Chronicle of Higher Education, June 21, 2018]

Another issue under the heading "Opportunity Cost"—an issue about which nothing is getting done while the congressninnies fret and fume about imaginary conspiracies—is of course immigration. The whole system is falling apart and Congress doesn't seem inclined to do anything about it.

Neither, to be fair to Congress, does our President. Immigration's been a mess for decades; but it's on Trump's watch that is has descended into full chaos. We are now at the point where a smart Third Worlder who wants to settle in the U.S.A. would be a sucker to go to his local consulate, apply for an immigrant visa, and wait a few years until his category comes up. Better choices are either (a) get a tourist visa and just overstay, or (b) fly to Mexico, hike up to the border, and claim asylum.

There's was an immigration angle in the news last week related to the college-admissions cheating scandal.

Half a million of that six and a half seems to have gone to Stanford's sailing program. The fixers told Stanford that Molly was a champion sailor, though she is of course no such thing. Stanford's former sailing coach John Vandemoer—he's been prosecuted for racketeering—was part of the fix. Molly Zhao entered Stanford two years ago; but she vacated her campus housing this March, and her present whereabouts are unknown.

That's why the colleges and universities are key centers of the multicultural racket that is poisoning our intellectual life and ripping at our social fabric. That's why I go down on my knees by my bedside at night and pray for the Almighty to send us a Henry the Eighth to sweep away the whole rotten stinking mess, the way Henry emptied out the monasteries.

I should say that there are losers in the academic money game, although with all that cash on hand, I'm not clear why there should be. While administrators and sports coaches are drinking champagne and dining on pheasant, most of the actual teaching work is done by research assistants on minimum wage. Possibly this is some remnant of the old idealistic notion of the selfless scholar.

Where does all the money come from? Four sources:

The system isn't intrinsically corrupt; but with that much moolah sloshing around, the vultures will gather.

The immigrant aspect is by no means all of the corruption: Americans were paying the fixers, too. And the fixers themselves in this case are Americans. [Lori Loughlin wants a trial to clear her name in college admissions scandal, report claims,  by Jessica Sager, Fox News, April 30, 2019

The case of Ms. Zhao does remind us, though, how far we have drifted from being a traditionally high-trust, north-European society. Other cultures—cultures in which the circle of trust is not much bigger than immediate extended family—expect to acquire social goods by corruption. Corruption for them is routine.

Mr. Zhao was just doing his best for his daughter. Who would object to that?

This little story is, in other words, a data point on the graph line we are sliding down from a noble republic with lofty ideals of fairness and equality under the law to just another squalid low-trust kleptocracy.

And they are linked, as the case of Molly Zhao illustrates. Where higher education is concerned, we need to think about how to starve the beast. A good, easy starting point would be to stop issuing visas to foreign students. Those full-tuition foreigners are great for the colleges' balance sheets, but they take up classroom seats Americans should be sitting in.

Higher education is a limited national resource. That resource should be for the nation's citizens to use. China has colleges and universities a-plenty—I used to teach at one—and a tradition of scholarship stretching back to the Bronze Age. Let them educate their own people.

The actual name of that office is the Office for Equal Opportunities and Programs, "OEOP" for short. That word "is" might in fact be a "was" at this point, as President Salovey told the university in an open email on April 9th that as well as expanding the office he will also rename it.

No word yet on what it's being renamed to. I suggest "Office of Multicultural Inclusivity, Goodwhite Orthodoxy, and Diversity—"OMIGOD" for short.

Anyway, Salovey's email—and here I'm actually quoting from an account of it in the Yale News, April 10th—the email said that the university will "hire a new deputy secretary who will help implement diversity initiatives across the University campus."

So apparently Yale University, in the opinion of its President—who, in the photograph that heads up the Yale News story, does not look ursine; more like murine—Yale doesn't have enough people monitoring its diversity, it needs more [Yale to revamp equal opportunities office,  by Serena Cho, April 10, 2019]

So what precisely will this new deputy secretary do?

Good grief! This is the diction in which administrators at a major modern university speak and write. You could put President Salovey's email in a time capsule and bury it so that archeologists of the 31st century will be able to see the depths of insanity our culture sank to before it collapsed completely.

Do you mind if I just pause for a moment? I'm having a rather vivid fantasy I want to share with you:

I have attained total power over the U.S.A. I announce to the nation that, after a decent pause to allow evacuation—twenty-four hours should be sufficient—the U.S. Army and Air Force will shell and bomb Yale University to rubble. Then, when the fires have burned out, the Army Corps of Engineers will move in and sow the ground with salt.

There, that's better! OK, to continue with the news story.

This further expansion of Yale's OEOP is a delayed result of two incidents last spring—delayed, because those incidents caused the university to hire in a raft of diversity consultants, all on fat fees of course, to study the incidents and come up with recommendations.

Both last year's incidents concerned a white lady named Sarah Braasch, a graduate student in Yale's Philosophy Department. Ms. Braasch is seriously smart, with degrees in real subjects—engineering and law—but she seems from her Twitter feed to be somewhat … let's say "highly strung."

In both those incidents last spring, Ms. Braasch called campus police on black people she found herself alone with at night in her dormitory building, people who seemed to have no business there.

One was a young black man who got in an elevator with her, rode up to her floor with her, then got out with her. The other was a black woman sleeping in the dormitory common room at 1 a.m., against dorm rules.

So both times Ms. Braasch called the cops, and the cops came. On her account of what happened I'd say that calling the cops was a prudent thing for a highly-strung young woman to do. [The Other Side of the Story: Sarah Braasch and the “Napping while Black” Incident at Yale, by freezelin, Medium.com, Mar 6, 2018]

The blacks took offense, of course, and in no time Ms. Braasch was being hounded in the media as a racist. Yale hired in the consultants, they investigated and produced a report, and Mr. Salovey's email is the result.

Heather Mac Donald, who is a Yale alumna, published an op-ed [At Yale, ‘Diversity’ Means More of the Same] in the Wall Street Journal April 23rd mocking what she called "this latest accretion of bureaucratic bloat" at her alma mater.

Yale President Salovey [Email him] actually responded, with a Letter To The Editor pasted together from snippets of multi-culti boilerplate, like a kidnap ransom demand. [Yale Is Right to Actively Cultivate Diversity, April 28, 2019]

"Diversity strengthens Yale" says the President, when obviously it does just the opposite—so much the opposite, he's having to hire more people to keep the lid on all the rancor and mistrust that naturally arises from diversity.

"Our students hail from 123 countries," boasts the President. I'd say that's 122 too many.

Yalies who want to acquaint themselves with foreigners and their ways should head off abroad in their summer vacations, as university students in my generation used to do.

Their campus time should be spent among other Americans. This is a big country; there's a lot to learn about it.