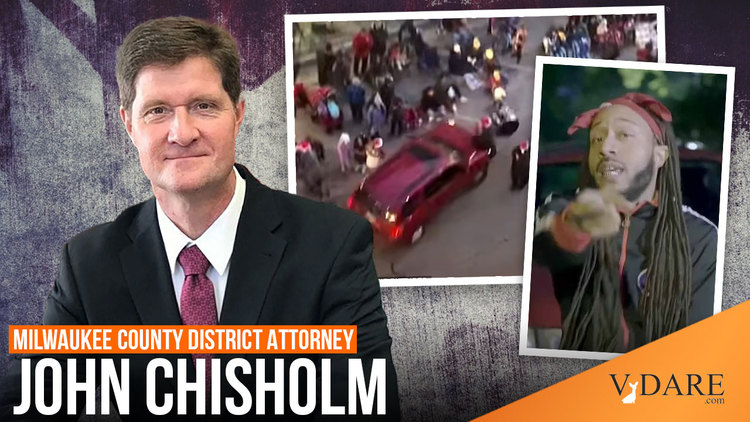 Mandatory upbeat story for the upcoming New Year: Americans are pushing back against the anti-white radicals in the political, media, judicial and medical Establishments.

At this time I would like to release that NBC and I have reached a settlement. The terms are confidential.

You'll recall Sandmann as the then-16-year-old student from Covington Catholic High School in Kentucky who participated in the 2019 March for Life in Washington, D.C. At the Lincoln Memorial after the march Sandmann and his group—many of whom, including Nicholas, were wearing MAGA caps—were confronted by some hostiles.

A party from some outfit called the Black Hebrew Israelites were shouting insults at them, and an American aborigine named Nathan Phillips was beating a drum and chanting at them in some aboriginal language.

Phillips came right up to Sandmann, chanting and drumming right in his face. Sandmann stood dead still and smiled.

That, the media instructed us, was white supremacist.

It was plain to anyone of sense that the kid was just trying to be polite and non-confrontational, but the media commies presented him as the villain of the incident. By the time the story faded Nicholas Sandmann had been fixed in the public mind as this generation's Bull Connor. In addition to the emotional distress this has caused to Sandmann and his family, the young man's reputation and career prospects have obviously suffered.

But he has been suing the media outlets energetically. Last year he got settlements from CNN and the Washington Post [Sandmann announces $250M lawsuit settled with Washington Post, FOX19, July 24, 2020]. This latest one is from NBC. Still on Sandmann's list: ABC, CBS, The Guardian, HuffPost, NPR, Slate, The Hill, and Gannett (which owns USA Today and a lot of local outlets).

We don't know the size of these settlements, but the New York Post quotes a civil-litigation expert that the CNN deal was worth "at least seven figures." Sandmann's original filing against NBC asked for $275 million. By the time it's all over, Nicholas Sandmann should be set up for life.

I cheer that prospect. And may Nicholas Sandmann use his settlements, along with his native good sense, smarts, and patriotism, for the public benefit.

I don't know enough about the law to estimate Rittenhouse's prospects, but while I've cheered his acquittal and wish him all the luck in the world, it seems to me that his case for damages is different from Sandmann's in important ways. He did actually shoot people. Sure, it was justifiable self-defense; but that's a lot different than just standing there grinning, which is all Sandmann did.

Meanwhile young Kyle got a standing ovation at the Turning Point USA conference in Phoenix on Monday [Kyle Rittenhouse gets standing ovation from conservatives, says he may sue media outlets, by  Timothy Bella, Washington Post, December 26, 2021]. It was, said one TV anchorperson, "a rock star reception."

Eighteen-year-old Kyle is in fact something like a rock star to the young patriots at TPUSA. He has, the Washington Post’s Bella tells us, "been embraced by conservatives in the weeks after he was acquitted."

That's great. But with rock stars in mind, I'd advise young Kyle to be discriminating about who precisely embraces him.

Remember what your Mom told you about going out on a winter's day without a scarf, Kyle: you might catch something.

You may not remember the Waukesha Christmas Parade massacre. It was only five weeks ago, but the Regime Media has deep-sixed it to the best of their ability, because the perp was black and the victims all white, making it not at all newsworthy.

Not at all! Where are the proofs for that latest story about Emmett Till?

So just to refresh your memory: the Waukesha Christmas Parade massacre was the incident on Sunday November 21st when a white-hating black man drove his SUV into a festival parade, killing six and injuring sixty-two, many seriously.

One of those killed was an eight-year-old child. Most of the rest were older citizens, the oldest 81.

The perp, 39-year-old Darrell Brooks, is a black ne'er-do-well with a long rap sheet of assaults and sex crimes, along with an online trail of antiwhite posts. Just three weeks before the parade massacre he'd been arrested for driving that same SUV at his girlfriend and charged with felony domestic abuse and "a serious weapons-related offense." For that he'd been released on a thousand dollars bail, which he'd posted just two days before the massacre [Residents Demand DA Be Fired After Waukesha Parade Massacre, Breitbart, December 26, 2021].

They argue that DA Chisholm, a turn-'em-loose Lefty, is responsible for that thousand dollars bail that set Brooks free to commit the massacre two days later. The bail was "inappropriately low," they say, given Brooks' criminal history and the pending felony charges against him.

In response, DA Chisholm has blamed one of his underlings for the bail decision.

Given that Wisconsin Governor Tony Evers is a bleeding-heart liberal who has never had a job outside politics and the public-education bureaucracy, I doubt this petition will succeed.

But I'm glad to see citizens at least trying to rid themselves of slimy nation-wreckers like DA Chisholm.

Meanwhile, the pandemic rages on. Is this the end of civilization as we know it? You might think so, reading the headlines. 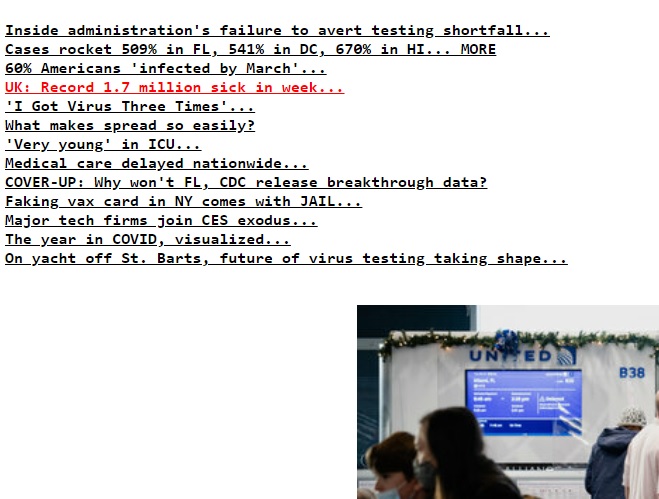 My own state's strict governess Kathy Hochul has mandated we all wear masks indoors.

But recently I was exposed to someone who was subsequently diagnosed with COVID, and I developed a debilitating rhinitis. But that was all. I didn’t bother to take a test—I’m triple-vaccinated—but there's a good probability we had some species of COVID. Hey.

The experience has left me even more skeptical of the COVID hysteria than I was before. Sure, I know it can be a killer, especially of the elderly. That's always been the case with colds and flu. Bertrand Russell died of the flu. (He was 97.) So public-health-wise, the sensible policy is: protect the most vulnerable and let the rest of us, the vast majority, get on with normal life.

The really upbeat news: this approach is increasingly the one favored by the general public—and even, to an increasing degree, by their elected representatives.

That mask mandate from New York State's strict governess Kathy Hochul—who, by the way, was not elected: she took over when Andrew Cuomo slithered out of office— is being widely ignored. Here on Long Island, the chief executives of both Nassau County and my own Suffolk County have publicly declared they won't enforce the mandate [Defiance of Gov. Hochul’s mask mandate grows as all of LI refuses to enforce it, by Bernadette Hogan and Bruce Golding, NY Post,  December 17, 2021]. Both those chief executives, by the way, are Democrats, as of course is our strict governess whom they're defying.

And the commentariat has brought forth heroes and heroines to inspire our disdain for elite hysteria. A stellar example here: Heather Mac Donald over at The Spectator.

Heather's December 20th post is titled Inside the Omicron fear factory, subtitle, "Public health chiefs and the media are working overtime to gin up hysteria." The New York Post cross-published it under the different headline, in the print edition: How the Elite Keep Us Scared.

I'll give you just a brief sample. Heather quotes a so-called public health expert at Georgetown University pooh-poohing reports of the Omicron variant's lack of severity: "Even if infection is mild in many individuals, it's not going to be mild in everyone."

But that 100 percent mildness standard is unrealistic. There are outliers in any disease and any treatment; the question is: what is the predominant reality? The zero-risk, zero-harm standard for public policy adopted for the first time with COVID has proven a social, economic and public health disaster.

That's absolutely right. It tells us something about the state of our nation, and of the state of the West in general, that we are nowadays so susceptible to these mass hysterias.

I actually find that hysteria more alarming than COVID. If we yield so easily to public-health hysterias, and to political hysterias like the Trump Derangement Syndrome of this past five years, shall we likewise be susceptible to military hysterias if our elites decide to gin one up? Now that is scary.

Again, though, we are seeing some healthy push-back against elite-sponsored hysteria from the public, from our representatives, and from brilliant commentators like Heather Mac Donald.

In this season of hope, there are good strong reasons to hope.