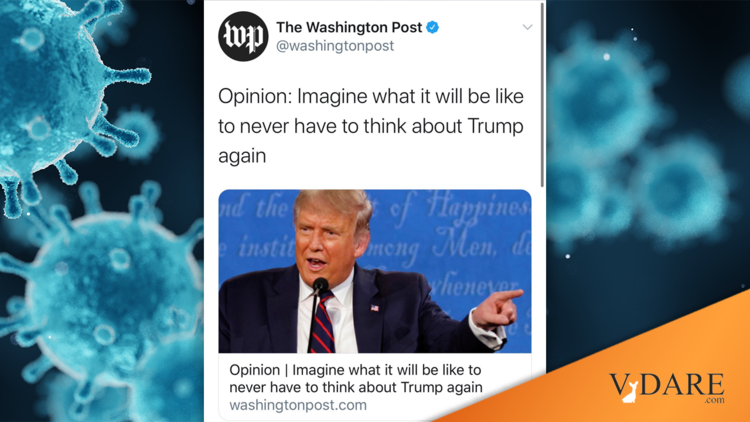 If you are like me and you watched Tuesday’s debate with a voice in your head screaming make it stop, take heart: We have the power to do just that. We can evict President Trump from the territory he has forcibly seized in our minds. We can — we must — vote him out of our thoughts.

We can remove this awful man from our collective headspace, which he has so thoroughly befouled. We can reclaim our serenity, our equilibrium, our sense of common humanity. We can return to a time when it was possible to go hours or even entire days without once thinking about what our president might be saying or doing. We can exhale. …

Think of all the time and energy we all must presently devote to the outbursts driven by Trump’s bottomless appetite for attention. Imagine having that psychic burden lifted. …

Imagine what we could do with the brainpower that is now sucked into Trump’s massive black hole of an ego. …Where might the conversation about systemic racism be able to start without the president questioning whether racism even exists, or ever existed, in the faux-America of his limited imagination?

… Doing so is exhausting, Sisyphean, psychic labor that drains the soul. …

A vote for Biden is more than a vote for sane governance. It is a vote for American sanity, period.

Jonathan Haidt and Greg Lukianoff have documented that America appears to be undergoing a mental health crisis dating back to about the beginning of the Great Awokening around 2013: i.e., before Trump. My guess is that the tension generated by the increasingly crazy things you are supposed to believe in order to not get canceled by the Woke is taking its toll. Trump has driven people even crazier by seeming to be immune to the requirements of polite society to be politically correct.

But is Trump really just the Emmanuel Goldstein of the Great Awokening? Will the Two-Minutes Hates be retired when Trump is no longer President?

A second question: what will political journalists do for clicks when Trump is gone? As reporters make this frantic effort to drive Trump from office, how many realize they are sending themselves to the unemployment lines?