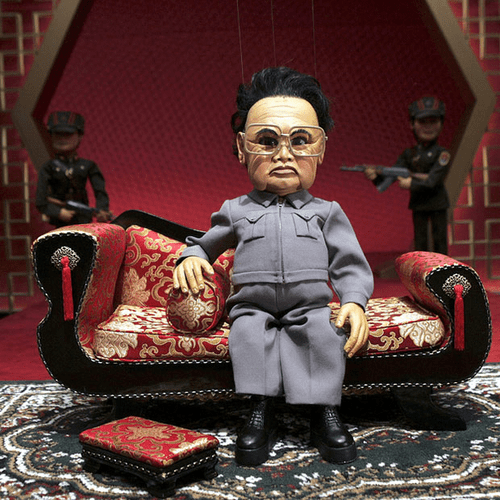 Today's big news story is that North Korea is claiming to have tested a hydrogen bomb.

Well, maybe they have and maybe they haven't.  We shall likely know in a few weeks when samples of atmosphere from the neighborhood have been analyzed.

Radio Derb was of course ahead of the news here, with a segment in our December 18th podcast given over to nuke issues.

(As usual, a transcript of last weekend's podcast will be archived on my own website this evening.)

06 — Nukes in the attic.     Here is an exchange that happened in Tuesday's GOP candidate debate.

"The biggest problem we have is nuclear — nuclear proliferation and having some maniac … go out and get a nuclear weapon. That's in my opinion, that is the single biggest problem that our country faces right now."End quote. Hugh Hewitt responded by asking Trump whether, of the three legs ofthe triad, Trump had a priority. That caught Trump on the hop. He plainly had no idea what Hewitt was talking about. He fielded it pretty well, though, quote:

"I think, for me, nuclear is just the power, the devastation is very important to me."Hewitt turned to Marco Rubio, who was glad to explain what the triad is.

A number of points here. In my opinion, Trump should darn well know what the triad is. I certainly agree that a wonkish mastery of policy detail does not a good President make. The most wonkish President we've had in recent decades was Jimmy Carter — I rest my case. There is a level of wonkishness, though — a thermometer reading, if you like — that, while I don't particularly want my candidate way, way above it, I also don't want him below it. Not knowing what the nuclear triad is puts Trump below my preferred thermometer reading there.

All right, it's a matter of opinion. Ann Coulter sets the thermometer reading lower than I do, and mocked Rubio for knowing what Trump didn't. OK, let's say "personal preference."

And in Trump's favor, he clearly has nukes in mind. This is an old Radio Derb theme. We all should have nukes in mind. They've been slumbering away there for seventy years, shoved away into some cobwebbed corner in the attic of our collective consciousness, never thought about from one year's end to the next.

Trump is right to remind us that there could be a very rude awakening in our future. Nukes are 1940s technology, like valve radios and vinyl disks. For all you or I know, we may be just a couple of breakthroughs in fundamental physics away from 13-year-old kids building nukes in Dad's garage.

Nukes have actually been in the news recently. I have two stories from the headlines.

We've known for two years that North Korea does have a fission bomb, what that news report calls an "A-bomb," but Kim seemed to be saying they are working towards a fusion weapon, an "H-bomb."

Might this be so? I went to the best-informed observer on these things, nuclear strategy and East Asia expert Jeffrey Lewis over at the 38North website. Jeffrey doesn't rule it out. Quote from him:

"While a staged thermonuclear weapon is likely more than North Korea can, at the moment, achieve technically, it is a mistake to rule out the aspiration by Pyongyang."End quote. I note in passing that if the Norks do develop an H-bomb, it is extremely unlikely they will give it the codename that the U.S. Air Force gave to the Nagasaki bomb back in 1945: Fat Man.

Second news story. In a televised interview December 9th Vladimir Putin praised the efficacy of the missiles his own air force is using against ISIS in Syria. These weapons, he said, can be equipped with either conventional or nuclear warheads. He then added, presumably in respect of the nuclear option, that, quote: "Naturally, we do not need that in fighting terrorists, and I hope we will never need it," end quote.

That's called "not ruling anything out." Vlad, a man very careful with his public utterances, is telling the world he isn't ruling out the use of nukes against ISIS.

Here are the two key facts about nuclear weapons.

Fact one: They are terrifically destructive. Donald Trump understands that, at least. The very biggest conventional bombs have yields in the range ten to twenty equivalent tons of TNT. That is the very utmost bottom of the range for nukes. The Fat Man bomb I just mentioned, that wiped out Nagasaki seventy years ago, had a yield of twenty thousand tons — a thousand times our biggest conventional bomb, ten thousand times the Oklahoma City bomb. We are speaking sheer destructive blast power here, never mind radiation and fallout. Trump is right at least to concentrate on that.

Fact two: There's an upper limit to how powerful a fission bomb can be. At some point the fissionable material blows itself apart before the remainder can fission. The upper limit is around half a megaton, five hundred thousand tons of TNT — 25 times a Fat Man. There are cheats you can do, ways to tweak the yield a bit higher, but there is a definite upper limit.

With fusion weapons, so far as I know there is no known upper limit. The Soviets actually built a hundred megaton fusion bomb, what Kim Jong Un calls an H-bomb, though they scaled it down to half that for the test. You could build a gigaton bomb, or a teraton bomb, with current technology.

There they sit, quietly, decade after decade, ticking away softly in that cobwebbed corner of the attic. A fifth-rate crackpot despotism like North Korea can manufacture them. Reason, common sense, even self-preservation are not always the dominant factors in human affairs.

You can buy 60 potassium iodide tablets on Amazon for fifteen dollars, and you should.