Earlier, by Steve Sailer: The Coalition of the Fringes Holds a Muslim-Jewish Encounter Session. It Doesn't Go Well. 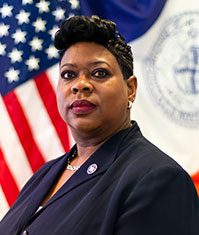 That was inspired by reading, in my June 27th New York Post, about a nasty little spat between the New York City Police Department's detectives union and 56 Bronx prosecutors—assistant district attorneys, to be precise [NYPD detectives’ union outraged over Bronx ADAs’ letter over protest conduct, by Rebecca Rosenberg, June 26, 2020].

These 56 prosecutors—35 named and 21 anonymous—sent a joint letter to their boss, Bronx DA Darcel Clark [Tweet her](a black lady, right) urging the DA to make "an unequivocal condemnation of the [police department's] unwarranted use of violence."

One other prosecutor, name of Paul Rosenfeld, published a dissenting letter describing the police officers he's worked with across 39 years as, quote, "decent, hard-working, and committed." [JPG]

A couple of things about all that:

It's a violent profession. How is a police officer supposed to arrest a refractory suspect, other than by applying violence?

The police need to conduct themselves in a professional and disciplined way, of course, and almost always do. The occasional exceptions get punished, often more than the offense justifies [Daniel Pantaleo, Officer Who Held Eric Garner in Chokehold, Is Fired, by Ashley Southall, NYT, August 19, 2019 ] To pretend that police work can be done without violence, though, is absurd.

When there is a fatal outcome for the refractory perp, you always hear someone say or tweet: "It's not a capital crime to sell cigarettes without a license," or "… pass a counterfeit bill," or whatever it was the perp was getting arrested for.

This one was a response to the St. Louis couple who came out on their porch with guns after a BLM mob broke down their gates.

The obvious answer to that is: "No. It's also not a capital crime in any jurisdiction to fall asleep on the railroad tracks. If you do so, though, and the outcome is fatal, no one's at fault but yourself." 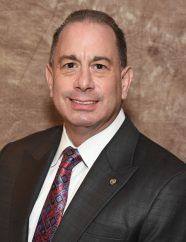 There's an age gap there. The 56 prosecutors complaining to the Bronx DA about police violence all have way less time on the job than that. Says Paul DiGiacomo, right, the president of the detectives union in an angry rebuttal letter to that same DA, quote:

Most of the signatures on that letter [the letter, that is, from the 56 prosecutors complaining about police violence] are from the class of 2019, which had a mere matter of months in your office before being quarantined. [PDF]

There may be another gap in play here, too. The dissenting prosecutor, Paul Rosenfeld, is plainly Jewish. Steve Sailer has noted that:

Two previous eras of black supremacist ideology—the late 1960s and the early 1990s—both came a cropper when they got too many Jews peeved at black anti-Semitism.

It was only a matter of time before the DC protests turned anti-Semitic. pic.twitter.com/YTbwwGuOYh

For keeping the media on your side, guys, this is not good strategy.