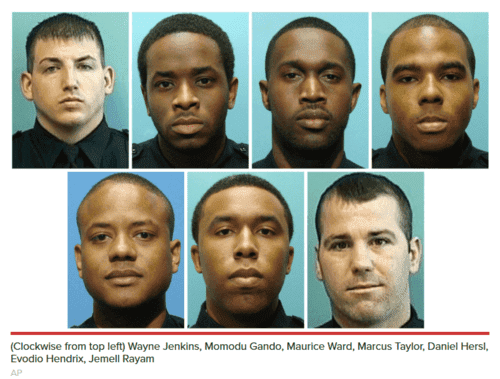 A recent story about police corruption and abuse in Baltimore is inspired by hearing on things like the "Gun Trace" squad prosecutions. (That's the Gun Trace squad above.)

Gettys Downs thinks of her public defenders in the courtroom as “accountability warriors” working each day to gain access to records that guarantee defendants a fair trial.

She said that police corruption has not gone unreported in Baltimore; residents with black and brown skin were coming to court and lodging complaints, but their voices weren’t prioritized.

Surely Ms. Downs [Email her] has noticed that in Baltimore, not only are the criminal classes mostly people with "black and brown skin", but so are the police, the mayor, the City Council, and even the judiciary. (For the last, see A Salute to Black Judges of the Maryland Judiciary, and note that it was written in 1988, which is more than 30 years ago.)

At the time of the most recent Baltimore riots, caused by the accidental death in custody of a drug dealer caught with an illegal knife, the Atlantic's pseudo-conservative writer Conor Friedersdorf wrote a piece called The Brutality of Police Culture in Baltimore | Years of abuses are every bit as egregious as what the Department of Justice documented in Ferguson, Missouri, and as deserving of a national response, April 22, 2015.

He detailed a good many cause of brutality and corruption in the Baltimore police force, and I pointed out that when you clicked on the links, the corrupt, brutal guy would always be black. See Contrary To Conor Friedersdorf, Baltimore Doesn’t Have A Police Problem—It Has A BLACK Police Problem.