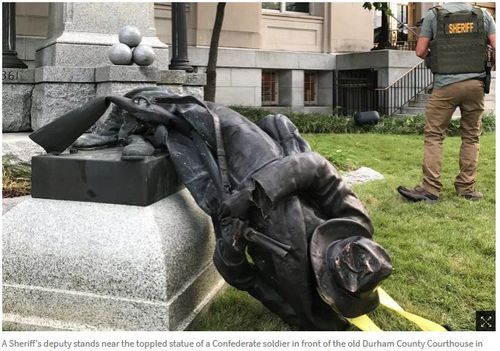 One of the worst excesses of the post-Charlottesville rioting (protests) was the toppling of Confederate statue (public property, and of a generic Confederate soldier) in front of the Durham Courthouse. It's the kind of thing that led Steve Sailer to say "How Soon Until Somebody Gets Lynched?"

Here's video of the toppling, and note that the News-Observer is still calling them protesters:

By Virginia Bridges [email her] And Joe Johnson [email him)

Durham—District Attorney Roger Echols announced Tuesday afternoon that he is dropping the charges against the five remaining people accused of destroying a Confederate statue in downtown Durham last summer.

The announcement follows a long day in District Court Monday in which a judge acquitted one defendant, Raul Mauro Jimenez, and dismissed the charges against two others, Peter Gilbert and Dante Strobino, after an assistant district attorney presented all her evidence.

Prosecutors presented all of the admissible evidence available, Echols said. Since his office planned to present the same evidence against the remaining defendants, it no longer made sense to prosecute the case, he said.

“For my office to continue to take these cases to trial based on the same evidence would be a misuse of state resources,” Echols said.

“Acts of vandalism, regardless of noble intent, are still a violation of law,” he said. [More]

District Attorney Roger  Echols is black, but at least he tried, in spite of talking about "noble intent". On August 20, 2017, Paul Mirengoff of Powerline blogged:

If you don’t mind feeling nauseated, check out this statement by Durham County District Attorney Roger Echols, in which he explains the factors he will consider in determining “a just resolution” to the case of those who destroyed the public monument in Durham. Echols says he will balance accountability for the destruction of property against the “climate in which these actions were undertaken.” He seems to believe that a neo-Nazi march in Charlottesville, after which one neo-Nazi ran over counter-protesters, is a partial justification, or at least a mitigating circumstance, for the unlawful destruction of property in Durham.

Echols proceeds to double down on this lawless theory of “justice.” He claims that justice requires him to consider the “pain of recent events in Charlottesville, and the pain in Durham and the nation.” I must have been absent the day my criminal law professor discussed emotional pain as a defense for vandalism.

Echols’ novel theory is a recipe for anarchy. Michael “Gentle Giant” Brown is shot in Ferguson? Smash some windows. Trayvon Martin is killed in Florida? Loot whitey’s store. You may be prosecuted, but if Roger Echols has his way you may get off lightly because of your pain. [More]

Echols had been talking about people who are "marginalized" and Mirengoff wrote:

But how marginalized are Durham’s blacks, anyway? They helped elect a D.A. who is willing to overlook or go easy on lawlessness out of sympathy for “historical” mistreatment of African-Americans. (Echols himself is African-American). If anyone is marginalized in Durham these days, it is probably those who want to see public property protected from left-wing mobs and, more generally, those who want to see the law enforced without regard to race or political agenda.

For more on the "marginalization" thing, see Liberals Never Notice They’ve Been Running America Racially Since 1964 by Steve Sailer and for prejudiced blacks in law enforcement see my “Right Up There With Oxygen”—Why Race Is Important, And Who It's Important To.