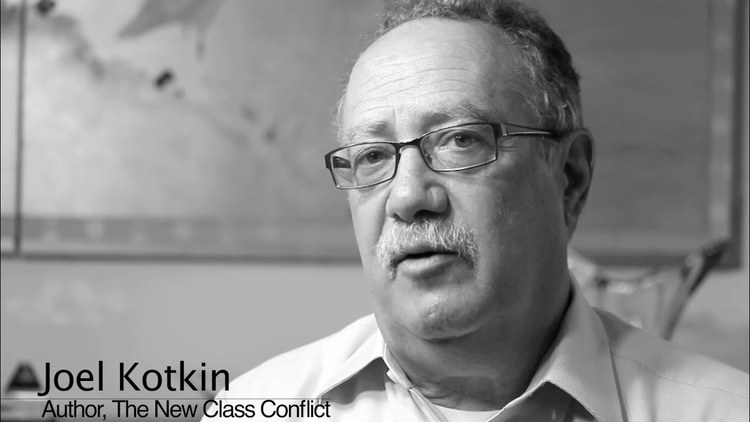 Joel Kotkin's Next Hundred Million: Don't Worry, Be Happy (Or At Least Ignorant)

[Peter Brimelow writes: I have the endearing habit of buying books from authors, an oppressed species, and getting them to inscribe them to me. But I was too rattled to do it when Joel Kotkin spoke about his current book at a recent Manhattan Institute event in New York—for the ironic reason that my young wife had just arrived and told me her purse had been snatched by a gang of Ecuadorian illegal immigrants in Macy's. (Impressively, the NYPD caught them). I did ask Kotkin why he hadn't mentioned the data showing Hispanics are developing into a new underclass. He replied airily that "the data are all over the place", which reassured the audience of New Yorkers but not me—why take this risk?

Some fifteen years earlier, I had debated Kotkin at an event arranged by the Pacific Research Institute. In person, he was affable and even obliging. I was startled to read his review of my Alien Nation:

"Nativism, even when presented by a friendly-looking guy with an adorable young son, is a recurring disease in the American experience. If we fail to vanquish this latest outbreak, it will vanquish us." (Links added)

For many patriotic immigration reformers, the year 2050 represents Doomsday: the projected date when America's population reaches 400 million and when whites (a.k.a. basically the group known until the 1965 Immigration Act as "Americans") become a minority. In the last two years the date has been moved up to 2042 and back to 2050.

But regardless of whether the date is 2035, 2042, or 2050, there are obvious concerns. The loss of America's historic white majority will reduce "social capital" and increase racial tension. And the sheer number of people will create sprawl, pollution, depletion of resources, and overcrowding of infrastructure.

Joel Kotkin, [Email him] a Distinguished Presidential Fellow in Urban Futures at Chapman University, attempts to assuage both concerns in his book The Next Hundred Million: America in 2050.

It is hard to pigeonhole Kotkin politically. He seems to take all the liberal assumptions about multiculturalism and egalitarianism for granted, but he does not seem particularly exercised about them.

While he shares the same pro-growth fanaticism of libertarians such as Tyler Cowen and the late Julian Simon, he proposes massive government intervention to fuel growth.

Sure enough, the book is blurbed by both pro-growth neoconservative Michael Barone and leftist Alan Wolfe.

If there is any internal consistency to Kotkin's outlook in The Next Hundred Million, it is that every single social and political change occurring is inevitable, and any challenges they pose can be resolved.

Take the issue of global warming. Libertarians typically claim it is a myth. Liberals believe it is a huge problem that requires government regulation even if that means slower economic growth. Kotkin accepts that global warming is a problem—but simply assumes that we will be able to use alternative energies such as biofuel and wind energy in the near future—despite the failure to make any of these energies cost efficient after decades of research and government subsidies.

This is the extent of Kotkin's answer to our future energy needs.

As a professor of "urban futures," his answer to sprawl is slightly more sophisticated, but even more presumptuous.

Kotkin hypothesizes "smart sprawl"—medium to low density suburbs which are not dependent upon big cities. He doesn't exactly explain how this will occur. Rather he simply assumes it will, because any other system would involve extreme overcrowding of cities and/or long traffic jams from the sprawling suburbia and exurbia.

Kotkin proclaims with glee that "in a dramatic change, the new suburbs will be far more diverse ethnically than those of  the past". He seems completely unaware that getting away from ethnic diversity is one of the reasons for the proliferation of suburbia. As suburbs become diverse, whites move to the exurbs. If immigration continues, they may run out of places to go.

Kotkin's blind spot for race extends to other areas of urban planning. For example he describes how the initially-vaunted Pruitt-Igoe housing project in St Louis had to be demolished 17 years after its completion "because it had deteriorated into a crime-infested social disaster."

Kotkin argues that it failed because its "developers believed that poor people, many of them from the countryside, could adapt to life in constrained spaces, with little open space."

Kotkin mentions as a side note that "it was not intended to house solely African Americans, but it ended up that way as much of the city's white population fled to the surrounding suburbs." But he does not explain that the project was originally segregated—and that the crime came after it was desegregated, and the whites left.

This is not to say that Kotkin completely ignores race. He begins his chapter on "Post Ethnic America" with an anecdote about Colbert/Ball Tax Service. Colbert/Ball is Houston based tax preparation business whose clientele was originally low- to middle-income blacks. Founder Al Colbert calls it "the Black H&R Block".

As Hispanics flooded into Houston, Colbert/Ball expanded its market and now Hispanics make up 30% of their clientele. Writes Kotkin, "To be sure, Colbert enjoys his adopted hometown's diversity and its staggering array of restaurants, cultural offerings, and shops. But above all, when he considers that diversity, he sees more customers."

This is literally the only thing Kotkin writes about Hispanic-Black relations. Don't worry about the depressed wages or deadly violence in schools and prisons. Al Colbert enjoys Mexican food! And has a few new clients!

When not using shallow anecdotes to address the Hispanicization of the country, Kotkin uses phony statistics. After quoting Sam Huntington and Pat Buchanan's fears about Hispanic assimilation, he attempts to refute them by asserting "one in three Latino Immigrants describes themselves primarily as American, but that rises to 85 percent in the first native born generation and 97 percent in the generation after that."

I had never heard of such a statistic so I looked to the source, which was a New York Times article about a poll by the multicultural New American Media on race relations. But the article said nothing about how Hispanics identify themselves. It did note that (Al Colbert's new customers notwithstanding) "93 percent of Hispanics, 92 percent of African-Americans… said racial tension was a very important problem in the United States." [Survey Points to Tensions Among Chief Minorities, Julia Preston, New York Times, December 13, 2007]

So I then took a look at the survey referred to in the article—and found no such questions. [Deep Divisions, Shared Destiny, New America Media, December 12, 2007]

I did, however, find a poll by the Pew Hispanic Center that found that only three percent of first generation, only 33% of second generations, and only one half of third generation Hispanics described themselves first as Americans. [Between Two Worlds: How Young Latinos Come of Age in America, Pew Hispanic Center, December 11, 2009 (PDF)]

Then there are the other problems caused by overpopulation and diversity. Robert Putnam famously noted that both depleted social capital. But don't worry, says Kotkin. While "bowling clubs and Boy Scout troops…are not likely to be resurrected", we now have Facebook, Farmers Markets, and Community Supported Agriculture!

"These markets are exciting because they are growing, despite all the forces working against them: crime, internet commerce, and the accelerated kinetic lives we lead in this new millennium. People are finding something important at these small, crowded, open-air market stalls, and it isn't just good tomatoes."

"People" no doubt are finding "something important"—but it's not community or social capital. Farmers Markets are listed as #5 in Stuff White People Like. In fact, a picture of a farmers market adorns the top of the SWLP website because:

"White people like Farmers Markets for a number of reasons. The first is their undying need to support local economies…and the idea of buying direct from the farmer helps them assuage the fears instilled in them from reading Fast Food Nation (and yes, every white person has read this book).

White people also like Farmer's Markets because it is outdoors (they love being outdoors), they can bring their dogs and children in expensive strollers, and they get to see other white people. If they are single, this is a good place to meet other single white people who share their passion for sustainability." [#5 Farmers Markets, Stuff White People Like, January 18, 2008]

With the exclusion of bringing your dog, there's nothing about farmers markets that can't be said of a Whole Foods (incidentally #48.) Anyone who has been to a Farmers Market can tell you it is no replacement for the Boy Scouts. You might say hello to your neighbors if you run into them, but you are in and out just as quickly as when you go to the supermarket.

Community Supported Agriculture creates even less social capital. For non-yuppie VDARE.COM readers, CSAs are co-ops where city dwellers pay a set seasonal or yearly fee to a local organic farm which delivers a random assortment of fresh produce every week. The delivery man aside, there is absolutely no human interaction.

Does Kotkin recognize any challenges for the 21st century? He acknowledges that the country is becoming more divided by class and that there are problems with upward mobility. Of course, when the wealthy can hire cheap immigrants rather than pay a living wage to Americans, this will exacerbate both problems. But such pesky points are not considered in The Next Hundred Million.

Despite all the happy talk, Kotkin's final passage is much more sober than the rest of the book.

"None of it will be easy, and certainly much can go wrong. Still we have no reason to lose faith in the possibilities of the future. For all its problems, America remains, as the journalist John Gunther suggested over sixty years ago, 'lousy with greatness.' The elements essential to forge a successful nation of four hundred million remain very much within our reach, there for the taking."

This statement seems to acknowledge that dealing with minority-white "nation" ("empire" might be a better term) of 400 million people is not a blessing, but a challenge.

Will we completely deplete our natural resources by 2050? Will the U.S. break down on racial lines? Will it resemble a Third World country like Brazil?

But these possibilities would not exist were it not for Washington's post-1965 policy of allowing massive immigration from the Third World.