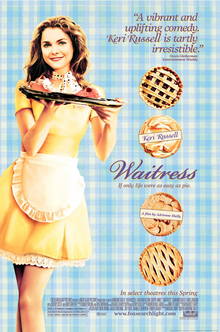 One of the more pleasant film surprises of the last few months, still playing at local theaters, is Waitress. A coming-of-age drama with comic undercurrents, it centers on a pregnant, going-out-of-her-mind young wife (played by Keri Russell of TV's late "Felicity" series) trying to make ends meet at a small-town Southern diner, baking pies, waiting on tables, bonding with the gals, and enduring her reptilian husband. Though a feminist morality play, the movie doesn't come off as vindictive or didactic—and it holds its own against more expensive predecessors such as Fried Green Tomatoes and Steel Magnolias. And yes, our pie-baking heroine gives birth at the end.

The sad part is that the movie's writer, director and co-star, Adrienne Shelly, until very recently a real-life wife and mom, won't be personally on hand to receive any Oscar or Golden Globe awards that might otherwise come her way.

And that has everything to do with America's ongoing debate over immigration.

We'll elaborate on that soon enough. But first let's get acquainted with the subject.

Adrienne Shelly lived a remarkable 40 years. Born Adrienne Levine in 1966 of Russian-Jewish ancestry, she grew up in Long Island, N.Y., discovering along the way a passion for acting and film production. She majored in film at Boston University. But ambition burned brightly, and she dropped out after her junior year to move to Manhattan.

With acting talent and attractive Ashkenazi-Jewish facial features similar to those of singer Taylor Dayne and author Elizabeth Wurtzel, the petite Miss Shelly got her first career break before the Eighties ended. A young New York filmmaker, Hal Hartley, wanted her to star in his first feature-length production, The Unbelievable Truth. She would play, memorably, a sharp-tongued high-school student who finds personal independence in unexpected ways. The 1989 dialogue-heavy film, shot in the grittier portions of Long Island, quickly became a cult favorite. Hartley then quickly shot Trust (1990), with a bigger accent on black humor, casting Shelly as a working-class high-school dropout who early on finds herself in the family way.

Shelly's performances have worn well. "She lights up the screen like a bottle rocket," recalled Newsweek's Malcolm Jones recently. [An 'Unbelievable' Talent, Nov. 10, 2006] Critics usually cite Steven Soderbergh's Sex, Lies and Videotape (1989) as the kickoff point for modern low-budget indie-filmmaking. But one could make a strong case for The Unbelievable Truth and Trust sharing the honors.

Shelly went on to act in about 20 more films, invariably lacking wide distribution. Grind, Wrestling with Alligators, and Factotum, the latter a fictionalized take on the early life and times of writer Charles Bukowski, remain among the best-known. She seemed forever destined to be one of those actresses—Parker Posey, another Hal Hartley favorite, also comes to mind—tagged with adjectives like "quirky" and "offbeat."

Not that Shelly minded that much. Film was her life. By the late Nineties, direction would become her main focus. As a director, she'd made several movies before Waitress, including I'll Take You There (1999), starring ex-brat-packer Ally Sheedy; Shelly also wrote the script and co-starred.

Adrienne Shelly, in other words, had become an unobtrusively significant figure in American cinema by the time she shot Waitress in 2005.

After the wrap, she returned to her Tribeca loft in Lower Manhattan to be with her husband, marketing executive Andrew Ostroy, and raise their preschool daughter, Sophie. All seemed right, professionally and personally.

But this ethnic, architectural and commercial urban polyglot has a downside. For Adrienne Shelly, that downside proved fatal.

Wednesday, November 1, 2006 began like any normal work day. Ostroy dropped his wife off at her Abingdon Square office-apartment in the West Village around 9:30 A.M.

By late afternoon, he had grown concerned, having not heard from her. He came by her office about 5:45 P.M. to a horrifying discovery: Adrienne Shelly's lifeless body hanging by a bed sheet from a bathtub shower rod.

Her husband called New York City police. They quickly declared the death a suicide. But after completing an autopsy the next day, the cops realized their judgment had been premature. For one thing, the sneaker prints in the bathroom failed to match any of the shoes belonging to the victim, who was wearing only socks anyway. For another, money was missing from Ms. Shelly's wallet. What's more, she left no note. And what mother of a preschool child does herself in like that? This sure didn't look like a suicide.

It didn't take long to find the culprit. On November 6, five days after Adrienne Shelly's death, the NYPD announced the arrest for second-degree murder of one Diego Pillco, a 19-year-old construction worker—and an illegal alien from Ecuador.

Mr. Pillco had made videos in which he admitted to killing Shelly. Somehow police had been tipped off that this was the guy they were looking for. Pillco was "having a bad day" (or so he said) when he committed the crime. He was held without bail.  [Star's Suicide Was Killer Cover-Up | Worker Admits Slay: Cops By Larry Celona, Murray Weiss And Dan Mangan, New York Post, November 7, 2006]

An ugly sequence of events led up to the killing

Diego Pillco was a laborer for a Brooklyn-based contractor, BCG, which issued a statement explaining that he'd worked only part-time "because of his immigrant status." [She Was Hanged Alive, New York Daily News, November 8, 2006] BCG, by the way, also owned the Brooklyn apartment building where Pillco lived with his brother in the basement.

According to court documents, on the day of the murder, Pillco had been doing renovation work on the apartment directly below the filmmaker's fourth-floor office. In the process, he was making a noise. Shelly went downstairs to complain. He responded in a less than congenial manner. A shouting match ensued. Pillco suddenly threw his hammer in the direction of her face, but missed.

Shelly immediately went back upstairs, and threatened to call the police. Fearing deportation, he chased after her and followed her through her door. . ['Bad Mood' Led To Lethal Rage |Alien's 'Actress Slay' Tale, By Leonard Greene, NY Post, December 14, 2006]

Once inside, she slapped him (good for her). In response, Pillco punched her in the face at least once, knocking her out. The backward motion of the blow caused her head to hit a table. Unable to detect a heartbeat, sources said, he dragged Shelly into the bathroom in order to stage a suicide. Pillco "then got a sheet which was on the bed and tied it around her neck and dragged her by the other end of the sheet from the hallway to the bathroom" court documents said. [Bittersweet breakthrough,  By Norma Meyer, Copley News Service, May 11, 2007]

He then allegedly climbed on the toilet, pulled her up and knotted the sheet to the shower rod—a technique he'd learned tying up pigs on a farm in his native Ecuador.

The autopsy indicated Shelley was still alive at the time Pillco strung her up.

But, during the time that Pillco stood on the toilet seat, he left an imprint of his sneakers—apparently a rare brand. That proved to be the smoking gun.

Pillco said nothing at his arraignment in Manhattan Criminal Court, and did not enter a plea. But the evidence against him—he has yet to stand trial—appears overwhelming. Assistant District Attorney Marit DeLozier told the New York Daily News that the medical examiner "made it clear, crystal clear, that this victim died from compression to her neck". Pillco was the only person who could have applied it.

Personality defects aside, Diego Pillco had no business being in America—a fact downplayed by much of the Mainstream Media. The New York Times (Looking for Solace in a Slice of Pie, by Julia Moskin, April 18, 2007) and, a month later, Copley News Service (May 18, 2007) both referred to Pillco as "a 19-year-old construction worker." The Syracuse Post-Standard (May 30, 2007, pay archive) wrote of him as "the worker." But, on the plus side, the New York Daily News (November 9, 2006) called Pillco a "19-year-old illegal immigrant."

In death, Adrienne Shelly has achieved a degree of superstardom she did not attain in life. Very soon after the murder, Waitress was accepted for airing at the Sundance Film Festival in January 2007. It played to favorable reviews—so favorable that Fox Searchlight Pictures only hours later bought the distribution rights for nearly $4 million. The NBC-TV crime drama Law & Order on February 16, 2007 aired an episode, "Melting Pot," that closely paralleled the murder—"ripped from the headlines," as they say. And Shelly's husband, Andrew Ostroy, has set up the Adrienne Shelly Foundation  to provide funds for aspiring female screenwriters and directors.

But, beyond the bittersweet reminders that Adrienne Shelly has not died in vain, is the context of the national debate.

Presumably, as mass-immigration enthusiasts might spin the narrative, Diego Pillco came here to do a job that Americans won't do. If only he had obtained legal status beforehand, he would have had no fear of deportation, and hence no incentive to permanently silence anyone likely to call the police.

And he was hard-working. Fellow residents of his Brooklyn apartment building told police that he worked every day of the week except Saturday—not even including the time he put in as the building's unofficial super. Neighbor Delmi Restituyo said Pillco earlier had admitted to her that he paid a smuggler $12,000 in July 2006 to get him into the country. "He worked so hard to support his family and pay off his debt," she said.

Immigration enthusiasts may find comfort in such words, as they lend credibility to the view that massive Hispanic immigration is crucial to our nation's economic survival; it's just a few bad apples, you see, who give the process a bad name. And even they work hard.

The problem with this rationalization: we don't know how "hard-working" newcomers are going to behave before they arrive.

If they have criminal intent or a sociopathic personality, they're certainly not going to reveal anything in advance.

Our immigration enthusiasts, including those in Congress and the White House, would rather focus on the virtues of "nice" versions of Diego Pillco than on the need to preserve this country's identity, sovereignty and safety.

That is "the unbelievable truth."

Send immigration cheerleaders a message this summer: See Waitress—and remind them of who made it, and her terrible end.

Carl F. Horowitz (email him) is a Washington, D.C.-area policy researcher who specializes in immigration, labor, welfare and housing issues. He has a Ph.D. in urban planning and policy development and has taught in the urban and regional planning program at Virginia Polytechnic Institute.