A fascinating new study has been published in the journal Evolutionary Psychological Science that makes sense of disparate findings on Leftists that I have been reporting for some time: [Pathogen Disgust Predicts Stigmatization of Individuals with Mental Health Conditions, by Eugene Dawydiak et al., Evolutionary Psychological Science, 2020]. It implies that poor mental health—and the Leftist views that are associated with this—spreads like pathogens, infecting people with worldviews that make them less likely to have children and less likely to defend Western civilization from barbarism. 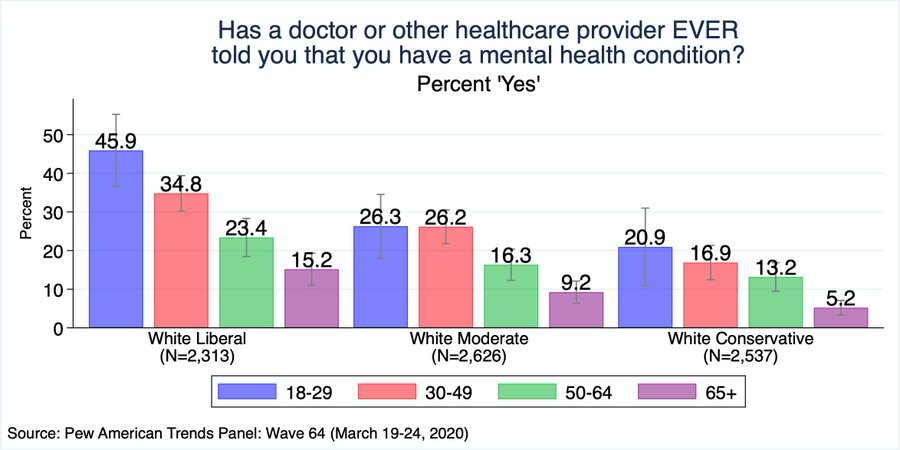 According to psychologist T.E. Joiner, there is sound evidence that conditions such as depression are contagious. If you spend a lot of time with someone suffering from depression, then you will tend to adopt their nihilistic thought patterns—that life is pointless and it’s futile doing anything—and become depressed yourself. And you will also be less likely to have children [Contagious depression, by T. E. Joiner, Journal of Personal and Social Psychology, 1994].

Also, I’ve reported studies which found that ways of thinking that would potentially destroy a society emanate from genetic mutants, who have consequent mental problems, including depression.

But now it appears these ways of thinking can spread through society, influencing even relatively normal people to hold destructive world views and so, in effect, go mad themselves.

If all of this is true, then it would make sense that we would have evolved to react to people who are mentally ill as if they carried some virulent pathogen which could infect us. This is because there really is in a sense in which the mentally ill can spread mental illness to otherwise healthy people and, in doing so, subvert the fitness of the entire society by making people think that it is pointless fighting for the survival of their people, and thus of their genes—because ethnic groups, as Australian geneticist Frank Salter has pointed out, are extended genetic families [On Genetic Interests, by Frank Salter, 2006]. It’s pointless having children, according to this dark worldview, because their lives will be pointless as well.

This is what the new study in Evolutionary Psychological Science—Pathogen Disgust Predicts Stigmatization of Individuals with Mental Health Conditions—has found.

According to the study, whose lead author, Eugene Dawydiak [Tweet him] is based at Scotland’s Glasgow University, it has long been hypothesized that we stigmatize people who are noticeably unhealthy, such as those who are obese, due our adaptations towards disease-avoidance. But this had still to be clearly proven.

In an attempt to prove it, the team looked at how scores on a psychological instrument that measures the strength of your disgust response—the Three Domains Disgust Scale—was associated with the extent to which people stigmatized three mental health conditions: schizophrenia, skin-picking disorder, and sexual sadism. Scores on “disgust” and “stigmatization” were found to be positively correlated.

In other words, we stigmatize the mentally ill because we are disgusted by them—and “disgust” is an evolutionary means of avoiding disease. This would, therefore, be consistent with the evidence that mental illness—which correlates such as Leftist views associated with reduced evolutionary fitness—acts like a contagious illness, which can be caught just like Covid-19, and which has devastating consequences for the people who catch it in terms of their ability to enjoy life or to have children.

When the mental health conditions were analyzed separately, there were positive correlations for sexual sadism and skin-picking but not for schizophrenia; so disgust-sensitivity is not clearly associated with stigmatizing schizophrenics.

This is interesting, because, although depression has been shown to be contagious, I am not aware of any evidence that schizophrenia is contagious.

This is perhaps because schizophrenia has been demonstrated to be extremely strongly genetic; it is approximately 0.8 heritable [Is Schizophrenia Inherited? by Scott Frothingham, Healthline, May 23, 2019]. Depression, by contrast, is about 0.4 heritable for women and 0.3 heritable for men [How Heritable is Depression? by Kayt Sukel, Gene Sight, 2019].That means it is much more influenced by environmental factors, including who you associate with.

In the authors’ article summary, they qualify that

These results potentially implicate overgeneralization of infectious disease avoidance in the stigmatization of individuals with mental health conditions.

But, based on the evidence of the contagiousness of certain kinds of mental illness, of which the authors do not show awareness, their qualification is open to question.

Which, it could be reasonably argued, they are.

So, the authors’ results are not, as they argue, an example of the “Smoke Detector Principle”—where we are prone to “false positives” because over-detection is far safer than even the possibility of under-detection. Instead, the results indicate an adaptive response to contagious, serious mental illness which, if allowed to spread, can subvert the normal functioning of the entire society.

We see this with the power that SJW agitators currently have to shut down free debate a.k.a. science. These SJWs, with their depressed and thus nihilistic worldview, are literally carriers of a form of psychological plague—a plague that is far more destructive than Covid-19.