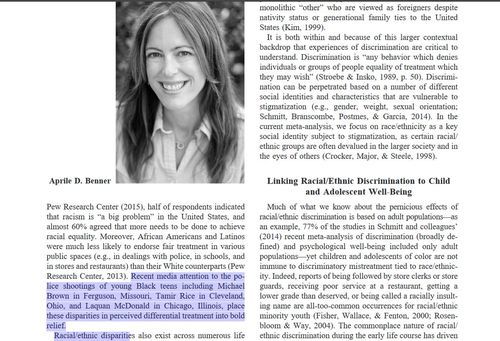 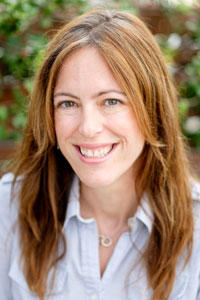 It only goes to prove how startlingly ideological US psychology departments have become. This is not some tendentious misreading of the team’s findings by Antifa or some other group composed of the developmentally arrested. It is actually how the researchers themselves interpret their findings that minorities who believe they are the victims of racism as children display these tendencies. Lead author, Dr. Aprile Benner (herself white) actually thinks this is the simplest explanation….or, at least, she pretends to.

“The psychological, behavioral and academic burdens posed by racial and ethnic discrimination during adolescence, coupled with evidence that experiences of discrimination persist across the life course for persons of color, point to discrimination as a clear contributor to the racial and ethnic disparities observed for African-American, Latino and Native American populations compared with their white counterparts,” says Benner, in an official press release about the study. [Racism Can Affect Your Mental Health From As Early As Childhood, By Kimberley Truong, Refinery 29, September 19, 2018]

We should expect a freshman psychology student—who has learnt that correlation does not equal causation and who has heard of Occam’s Razor—to be able to see the gaping flaws in this study’s conclusions. Yet it seems that Aprile Benner [Email her], armed with her University of California PhD, and even those august luminaries at the American Psychological Association, cannot.

Let’s go through this slowly. Northeast Asian children in Western countries also experience racism at school. If anything, they probably experience more racism than Hispanics or blacks because they tend to be physically weaker (so less able to stand up for themselves), are on average academically abler than whites (meaning that they’re “nerds”), and have slanted eyes that bullies can mockingly imitate. Most of these characteristics are true of Jews as well.

Yet both of these groups are less likely than whites to under achieve academically, behave violently, join gangs or take drugs [Racial and ethnic differences in psychopathic personality, By Richard Lynn, Personality and Individual Differences, 2002].

Northeast Asian Americans are, however, more likely than whites to suffer from depression and kill themselves [Understanding Asian American Female College Students and Their Sense of Belonging, By Delia Cheung Hom, PhD Thesis, Northeastern University, 2015] but there’s a clear reason for this that we’ll look at later.

The simplest explanation is one which explains the most evidence with the fewest assumptions. “Racism” may theoretically cause the pathologies that Benner highlights among blacks, Hispanics, and Native Americans. But these pathologies are not found—with the exception of depression—among Northeast Asian Americans or American Jews, who are surely also victims of racism. So Benner’s explanation is hugely question-begging. The Northeast Asian (and Jewish) anomaly implies that there may be another, simpler, explanation which explains all of the empirical evidence.

And, of course, there is just such an explanation: race differences in intelligence!

African Americans have an average IQ of 85, Native Americans about 87, Hispanics about 89, Whites—100, Northeast Asians—105 and Jewish Americans—112 [Race Differences in Intelligence, By Richard Lynn, Washington Summit, 2015]. Intelligence is negatively associated with a distrusting nature, high self-esteem, and the inability to understand the intentions and feelings of others (in other words “low empathy”) [The g Factor, By Arthur Jensen, 1998]. Intelligence is also, in general, negatively associated with schizophrenia (which makes you paranoid.) [Intelligence in schizophrenia: Meta-analysis of the research, By E. Aylward et al., Schizophrenia Bulletin, 1984]

It follows that the less intelligent you are, the more likely you are to believe that people are being racist towards you.

As Arthur Jensen also pointed out in The g Factor, intelligence is also negatively associated with poor academic achievement, criminal activity, dropping out of school and poor impulse control. So, clearly, intelligence is the simplest explanation for most empirical evidence pf pathology. Members of minority groups who have low intelligence are going to believe that they are the victims of racism and—independently of that—they will display behavior patterns predicted by their low intelligence. Northeast Asians and Jews—even though they’re just as likely to be victims of racism—do not display the same behavior patterns because they have high intelligence, meaning they do quite the opposite of what races with low intelligence do.

This model explains all the evidence. So it is amazing—considering that three of Benner’s five co-authors are Northeast Asians: Yishan Chen, Yijie Wang and Yen-Pi Cheng—that nobody thought of it.

The issue of “depression” can be explained by the way that low IQ indirectly predicts depression, due to the fact that low IQ leads you into poverty, unemployment, relationship and friendship breakdown, drug abuse, alcoholism, poor health and thus general misery.

By contrast, Northeast Asians are prone to depression for mainly genetic reasons and in spite of their tendency, in Western countries, to achieve high socioeconomic status. Evolved to extremely harsh yet predictable ecologies, their ancestors could only survive in tightly bonded groups. This meant that you had to be able to get on with everybody, or you’d be cast out into the cold to die. This selected in favor of strong social anxiety, which is adaptive because it means that you are concerned about the future. However, this can become overwhelming, leading to depression and suicide.

But when African Americans—and those of low IQ in general—suffer from depression it tends to specifically be a kind of post-traumatic stress effect. Not only is PTS maladaptive—because you end up moping about when you should be dealing with the situation—but the trauma will often be a result of a poor decision that is underpinned by low intelligence: a fight, a break up, or a stupid risk that nearly cost you your life. [Race Differences in Anxiety Disorders, Worry and Social Anxiety, Heitor Fernandes et al., Mankind Quarterly, 2018] So, it follows that minorities who have low IQ will not only be more inclined to believed that they are the victims of racism, they will be more likely to suffer from post-traumatic stress. Benner and her team have simply subsumed everything into the catch all term “depression” when they could have distinguished between different kinds of depression.

The simplest interpretation of Benner et al.’s findings, therefore: there is a non-causal relationship between minorities believing they are victims of racism and their behaving in a pathological way. They believe they are victims of racism because they have low IQ and they behave in a pathological way and become depressed because they have low IQ.

Benner, however, summarizes: “This study highlights the pernicious effects of racial/ethnic discrimination for adolescents across developmental domains and suggests who is potentially at greater risk.”

But it is her study that is “pernicious.” And it is ordinary Americans whom it puts at “greater risk” of believing that minority pathology is their fault.