Frank Salter on State versus Nation Down Under

From—good grief!—2001 onward I have posted occasional pieces on VDARE.com about Australia, usually opening the piece with an apology to readers for dragging their attention away to a distant nation that generates very little news of interest to Americans. They don’t even play football! (Not the way Americans do, at any rate; and I’m not talking about soccer, either.)

This time I’ll forgo the apology. What follows is a review of the new book by Australian political scientist Frank Salter. The book is titled The War on Human Nature in Australia’s Political Culture. As the title makes plain, the book is concerned with some particularly Australian themes; but many of the points it makes are of universal interest, and highly relevant to the National Question topics we concentrate on here at VDARE.com. 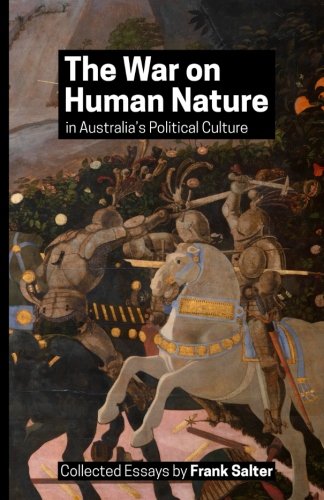 If you’re familiar with biological approaches to the human sciences you’ll know Frank Salter as author of the 2003 book On Genetic Interests: Family, Ethny, and Humanity in an Age of Mass Migration, a dense and scholarly treatment of social and political topics from the perspective of altruism within groups of genetically similar people.

Salter’s new book contains six stand-alone essays exploring the territory where the rigorous human sciences meet politics and culture. Five of the essays appeared in the Australian conservative magazine Quadrant from 2010 to 2012; the sixth has not previously been published.

The third and fourth essays explicitly address the National Question, which Salter defines at the beginning of the third:

No front of the culture wars is more important than the national question—what constitutes a nation, the benefits and costs of nationhood, the connections between national identity and interests, ethnic and racial differences, and the proper relations between nation, state, immigration, domestic ethnic groups, and other countries.

With a handful of exceptions, the reports showed no awareness of biological discoveries in the modern human sciences. For instance:

The general absence of biosocial perspectives was evident in the media’s lack of interest in signs of ethnic hierarchy. Pecking orders interest zoologists. They are ubiquitous in vertebrate species. Ethnic hierarchy is relevant to the national question because a fundamental legitimation for government is that it protects the people from conquest … Yet the Australian elite media show little interest in ethnic hierarchy, beyond alleging white racism.

Salter follows with several pages of examples of anti-white sentiments from those media reports, some of them quite shocking. There are contrasting mentions of the media treatment dished out to dissidents who have criticized mass immigration and multiculturalism—historian Geoffrey Blainey, for example (whose case was covered by VDARE.com in 2004).

Our author then gives a brief history of the shifts in intellectual fashions that led to “the top-down demographic revolution now under way across the English-speaking world.”

This changing of the intellectual guard occurred in the United States by the 1940s and was already apparent in the 1920s and 1930s with the rise of anti-Anglo ideology dressed up as anti-racism. That was the tipping point … The alienation of the state from the nation left the latter without effective leadership and thus ill-equipped institutionally or financially to contest control of centralized government, education, and the media.

For this analysis Salter uses some of the ideas put forward by another VDARE.com visitor, sociologist Eric Kaufmann, in his book The Rise and Fall of Anglo-America—though without, Salter pointedly notes, “the positive spin Kaufmann puts on cosmopolitanism.”

Salter explains how this changing of the guard played out in Australia, and the present-day consequences, from a perspective VDARE.com readers will find sympathetic. Indeed, he uses much of the same language we use:

The following essay, Salter’s fourth chapter, carries the issue into Australia’s universities. Should not academics from the human sciences step up to enlighten the public and correct the anti-white bias in the media?

Perhaps they should, but resistance to biological theories of human social behavior is even stronger Down Under than here in the U.S.A. The resistance is not empirical, nor even properly intellectual, but ideological:

No political science or sociology department [in a survey Salter conducted] reported a scholar basing his or her research on behavioral biology. The skew towards Marxist and other environmental theories means that scholars of nationality do not know what to do with the wealth of findings drawn from evolutionary psychology, ethology, and sociobiology; except ignore them.

It’s a dismal state of affairs altogether, made dismaler by the lack of constitutional protections for freedom of speech in Australia.

VDARE.com readers will remember the cases of law professor Andrew Fraser and columnist Andrew Bolt. Fraser was suspended in 2005 for writing, in a letter to his local newspaper, that blacks commit a disproportionate amount of crime. Bolt scoffed at blonde, blue-eyed, fair-skinned Australians who claim entitlement to race preferences, prizes, and scholarships on the basis of some tiny strand of aboriginal ancestry. Nine of these opportunists sued Bolt in court for their hurt feelings … and won!

In the fifth of his six essays Salter tosses and gores Australia’s little—but influential and dismayingly respectable—clique of open-borders libertarians, using arguments that will be familiar to VDARE.com readers. He rounds off the essay with some blunt facts.

The only population difference between the immigration levels adopted by succeeding governments over recent decades and open borders is the date at which the country becomes overcrowded. In addition ethnic stratification is growing. Most Aboriginal Australians remain an economic underclass and some immigrant communities show high levels of long-term unemployment. Anglo Australians, still about 70 percent of the population, are presently being displaced disproportionately in the professions and in senior managerial positions by Asian immigrants and their children.

The solution, he believes, is to break the stranglehold of ideology on university departments of humanities and social sciences.

Lots of luck with that.

Those three essays—Salter’s third, fourth, and fifth—are the real meat of the book, but the other three are worth reading.

The first, “Introduction to the Culture War on Human Nature,” surveys the different levels of success at which biosocial approaches have penetrated popular media, business culture, and the academic social sciences.

The second, “Sexless Gender Studies,” is a take-down of that area of the social sciences where the biological dimension is most undeniable…you would think.

The sixth and final essay in this collection is an appreciation of Salter’s mentor and colleague Hiram Caton, “Australian Pioneer of Biosocial Science.” Caton’s name was not previously known to me. He was American by birth, a native of North Carolina, and in his thirties contributed to the conservative press here. I smiled to read that: “In 1965 his National Review circle welcomed the immigration reform legislation of that year.” (This may be an exaggeration of NR’s attitude at the time—see More Immigration, by Ernest van den Haag, NR, September 21, 1965.) Caton’s name does not, however, appear in either George H. Nash’s The Conservative Intellectual Movement in America Since 1945 or the ISI’s American Conservatism: An Encyclopedia.

Frank Salter offers a fresh view of the National Question from the other side of the world. His point of view and his arguments will not be shocking to VDARE.com readers, but he emphasizes their grounding in sociobiology and genetic interests.

The War on Human Nature in Australia’s Political Culture is a fine contribution to the literature of dissent against multiculturalism, mass Third World immigration, and white ethnomasochism. I wish it every success.

John Derbyshire [email him] writes an incredible amount on all sorts of subjects for all kinds of outlets. (This no longer includes National Review, whose editors had some kind of tantrum and fired him. ) He is the author of We Are Doomed: Reclaiming Conservative Pessimism and several other books. His most recent book, published by VDARE.com com is  FROM THE DISSIDENT RIGHT (also available in Kindle).His writings are archived at JohnDerbyshire.com. Readers who wish to donate (tax deductible) funds specifically earmarked for John Derbyshire's writings at VDARE.com can do so here.