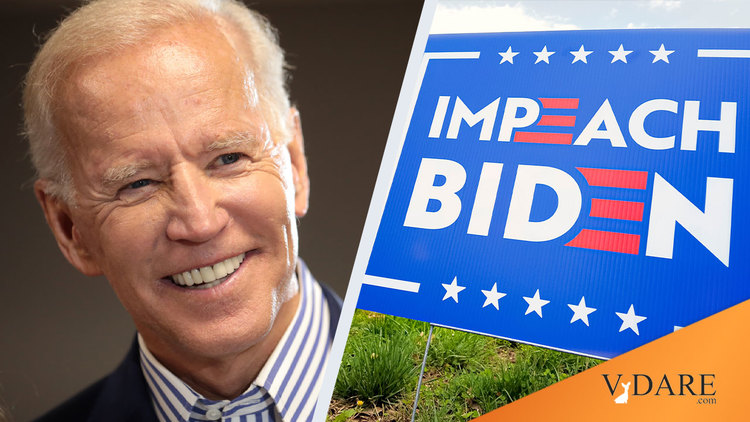 Impeachment Talk (Mayorkas? BIDEN?) Is Spreading On The Respectable Right…

Last week, several Texas counties called the illegal-alien invasion across our southwest border what it is: an invasion. They wanted Gov. Greg Abbott to follow suit so that state and local officials can enforce immigration laws because the Biden Regime refuses to do so. Abbott didn’t declare an invasion, but he did authorize state police to send illegal immigrants back to ports of entry [Gov. Greg Abbott Empowers State Authorities to Return Migrants to Border Crossings, by James Barragan and Patrick Svitek, Texas Tribune, July 7, 2022]. But a foreign enemy is not driving this invasion: instead, our own president and his deputies are encouraging it. The only appropriate response is impeachment—which is why the declaration by the four counties is so important. It aligns with growing calls for the impeachment of President Joe Biden and Homeland Security Secretary Alejandro Mayorkas.

The Texas declaration is not mere rhetoric. It’s an action with actual substance. Its rationale rests on the theory that a state can declare an invasion and use its constitutional war powers to direct the National Guard and law enforcement to stop the invaders; i.e., enforce immigration law. It passes constitutional muster, too. Article I, Section 10, Clause 3 says states cannot usurp federal power on matters such as war or foreign policy “unless actually invaded, or in such imminent Danger as will not admit delay” [emphasis added] [Texas Counties Say The Border Crisis Is An ‘Invasion.’ They’re Not Wrong, by John Daniel Davidson, The Federalist, July 6, 2022]. The Treason Lobby, of course, would run to the kritarchs. A reasonable court would side with the state, but the recent U.S. Supreme Court decision allowing Biden to revoke Remain in Mexico indicates the high court may not be so reasonable.

Texas, by the way, isn’t alone. Arizona Attorney General Mark Brnovich wants Governor Doug Ducey to declare an invasion as well. “Our office concluded that violence by cartels and gangs who have now assumed control of our southern border meets the legal definition for an invasion, but it’s up to the Governor to make that actual determination,“ Brnovich recently wrote to Ducey. Ducey resisted Brnovich’s entreaty in February, but the situation has worsened considerably since then. Arizona counties might follow their Texas counterparts to put more pressure on the governor [Arizona AG Brnovich urges Gov. Ducey to declare border crisis an ‘invasion,’ by Adam Shaw, Fox News, July 7, 2022].

Now, if the Texans are right and the deluge at the border is an invasion, someone must be held responsible. That someone is Joe Biden, whose policies have invited illegals to swarm across the border. As well, he refuses to enforce federal immigration law, a clear violation of his oath of office.

The Biden Regime’s offenses are numerous:

The Biden regime announced its latest insult this week: it would no longer consider multiple illegal re-entries into the country as a disqualifying mark against illegals applying for citizenship. Experts warn the new policy invites migrants to come in illegally as many times as they want.[DHS Erases Barrier to Legal Status for Some Illegal Immigrants, by Stephen Dinan, Washington Times, July 5, 2022]. 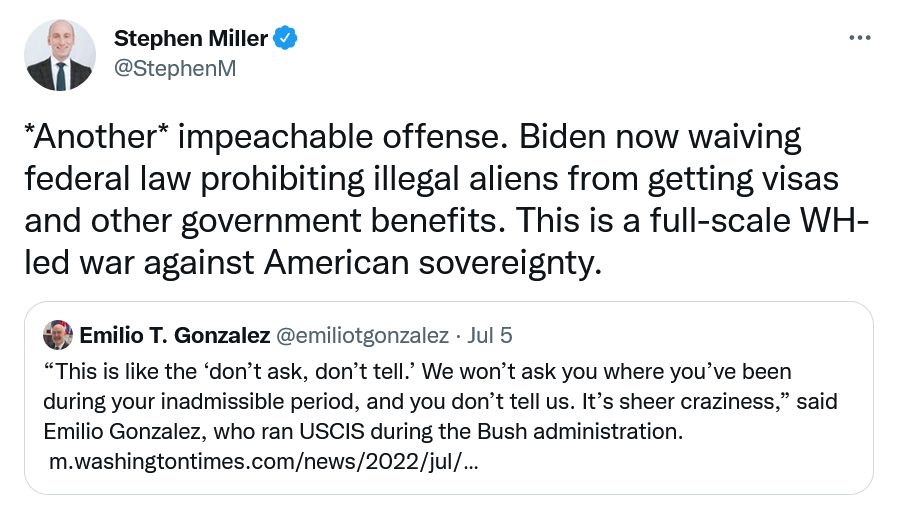 No wonder border agents detained more than 400,000 illegals from April 1 through May [Illegal Border Crossings Hit Record in May, by Alicia A. Caldwell, Wall Street Journal, June 16, 2022]. And since October 1, nearly 500,000 illegals have slipped past border agents [EXCLUSIVE: 476K Migrant Got-Aways Recorded in 2022 So Far, by Randy Clark, Breitbart, July 5, 2022]. Images of the border show a full-fledged invasion.

“This was one of the biggest, if not the biggest, single group we have ever witnessed during our coverage of this border crisis here in Texas.” - Fox News’ Bill Melugin

The #BidenBorderCrisis is only getting worse under Joe Biden’s watch. pic.twitter.com/XAH1gUG3w7

Clearly, Biden and his henchman Mayorkas deserve impeachment. And more than 66 percent of Republican voters agree that the party should impeach Biden if they retake Congress in the fall. That’s pretty strong support [Over Two-Thirds of Republicans Think President Biden Should Be Impeached, UMass Amherst, May 13, 2022].

And now, impeachment will get more support because one of the most powerful names in conservatism backing it.

Fox News host Tucker Carlson endorsed impeaching Joe Biden this week, albeit not over the border crisis but for quietly selling some of the Strategic Petroleum Reserve to China [Biden should be impeached for sending our natural assets to our enemy China, July 6, 2022].

But Carlson has previously said Biden’s border treason is an impeachable offense [Not long ago, Biden would‘ve been impeached for his border policies,  October 26, 2021]. Important thing is, the No. 1 cable news host is lending his name and star power to the idea. Tucker has the incredible ability to push politicians in the direction he wants and to make ordinary conservatives adopt his positions. What he says matters, and often becomes a key GOP talking point, if not policy priority. Only Donald Trump can claim a similar level of influence.

Notably, influential Republicans are discussing impeachment, too. Senators Ted Cruz, Tom Cotton, and others have entertained the idea, although Mayorkas seems to be their target. Ohio Rep. Jim Banks, head of the powerful Republican Study Committee, and Texas Rep. Brian Babin penned an op-ed last week demanding Mayorkas’ removal over the border crisis.

Secretary Mayorkas has unquestionably violated his oath of office. He has intentionally invited millions to cross into Texas, Arizona, New Mexico, and California, violating Article IV, Section 4 of the Constitution, which requires the federal government to “protect each of [the states] against invasion.“

Our Constitution wisely set a high standard for impeaching federal officeholders. And unfortunately for us, Secretary Mayorkas’ blatant disregard for our laws meets that standard with ease. He has enriched criminals and deadly drug cartels, devastated American communities, and abandoned his sworn oath and therefore the Constitution in the process. When Republicans are in the majority again, we have a duty to end his bloody and lawless tenure and do what he has utterly failed to do: defend and secure the homeland

[Secretary Mayorkas has failed to defend our homeland and must be impeached, by Jim Banks and Brian Babin, Fox News, July 7, 2022]

Banks and Babin aren’t just writing op-eds. They’re working to impeach Mayorkas if the GOP retakes Congress in November’s midterm elections. In April, Banks and Babin wrote a letter effectively calling for Mayorkas’ impeachment without saying the word. One hundred and thirty three House Republicans signed, including such heavy hitters as House Minority Whip Steve Scalise and GOP Conference Chair Elise Stefanik. House Minority Leader Kevin McCarthy has also expressed some support without formally endorsing it. “If someone is derelict in their job, there is always the option of impeaching somebody,” he told reporters [House Republicans plot to impeach Mayorkas, by Jonathan Swan and Andrew Solender, Axios, April 25, 2022].

This contrasts with McCarthy’s weird statement that the GOP will not impeach Biden for “political purposes” if they retake the House. But removing a DHS secretary will be easier than removing a president. Mayorkas might even resign rather than face the humiliation. Republicans mightn’t need the Senate to vote to jettison Mayorkas. Just the threat of House proceedings could do the trick.

But that shouldn’t dissuade Republicans. Biden and Mayorkas deserve impeachment regardless of what Democrats will do. They impeached Trump twice with zero chance of removing him from office. They did it to send a message and to bog down their enemy.

Republicans must fight fire with fire. Biden’s border treason cannot be excused. You cannot complain about an invasion and let the man responsible go unpunished.