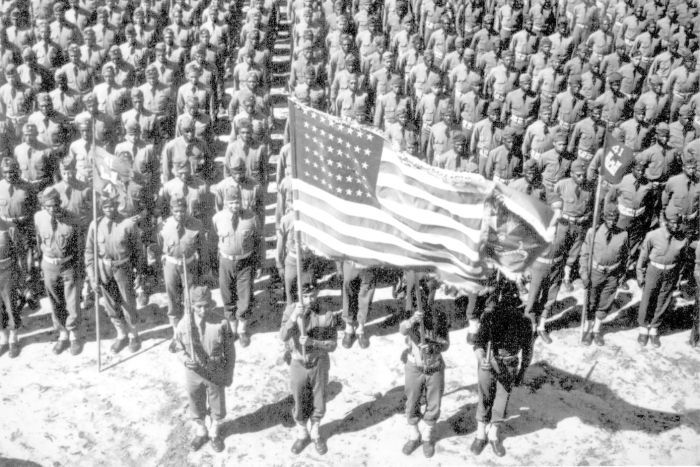 This is from the Australian Broadcasting Company. Compare the decades of coverup of this incident, and the massive publicity over the Tuskegee Airmen.

Also note that the historian seems to be suggesting that "racial taunts" and what he calls "serial abuse by two white US officers" almost justifies the troops decision to  machine-gun their officers.

Finally, note the headline—it should obviously say "WWII mutiny by black troops" since that's the whole point of the story, but but it doesn't.

An Australian historian has uncovered hidden documents which reveal that African American troops used machine guns to attack their white officers in a siege on a US base in north Queensland in 1942.

Information about the Townsville mutiny has never been released to the public.

But the story began to come to light when James Cook University's Ray Holyoak first began researching why US congressman Lyndon B Johnson visited Townsville for three days back in 1942.

What he discovered was evidence detailing one of the biggest uprisings within the US military.

"For 70 years there's been a rumour in Townsville that there was a mutiny among African-American servicemen. In the last year and a half I've found the primary documentation evidence that that did occur in 1942," Mr Holyoak told AM.

During World War II, Townsville was a crucial base for campaigns into the Pacific, including the Battle of the Coral Sea.

About 600 African-American troops were brought to the city to help build airfields.

Mr Holyoak says these troops, from the 96th Battalion, US Army Corps of Engineers, were stationed at a base on the city's western outskirts known as Kelso.

This was the site for a large-scale siege lasting eight hours, which was sparked by racial taunts and violence.

"After some serial abuse by two white US officers, there was several ringleaders and they decided to machine gun the tents of the white officers," Mr Holyoak said.[More]