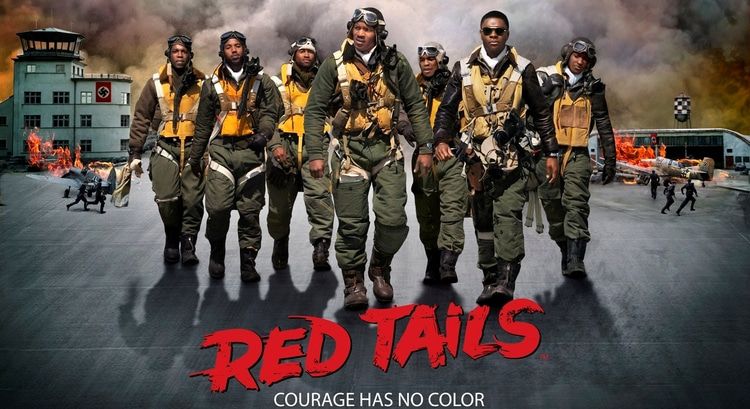 "Red Tails" Or Red Tales? George Lucas And The Myth Of The “Tuskegee Airmen”

Indiana Jones, and now Red Tails, about the Tuskegee Airmen) is a smart man. He wouldn’t be worth $3.2 billion were he a man of limited intelligence.

Years ago, I picked up a copy of The Power of Myth

,  a book that captured a conversation between the famous student of myths Joseph Campbell and journalist Bill Moyers.

Throughout the discussion, Campbell kept referring to his admiration for Lucas’ Star Wars saga. Moyers commented: “This is a very old story in a very new costume.”

Campbell went one better. He described   how Lucas—through the character of Luke Skywalker—“has put the newest and most powerful spin to the classic story of the hero.”

The classic story of a hero. Campbell makes the important point in his seminal The Hero with a Thousand Faces

that all civilizations must have foundational myths to unite their people around a common shared history, and which they must always remember, protect, and honor.

Once a civilization, once a people, lose their heroes—forgetting to honor them—well, that nation is doomed. But nature abhors a vacuum, so new heroes will always arise to replace those discarded, be it through revolution, conquest—or a malevolent neglect from that civilization’s elite.

Red Tails is being released January 20 in theaters across the country. With its production and marketing bankrolled by Lucas personally to the tune of more than $100 million, it is designed to be the blockbuster that establishes in the hearts and minds of millions of impressionable moviegoers a new myth: in effect, that the vaunted Tuskegee Airmen single-handily won World War II for the Allied Powers.

That these valiant Black aviators, who overcame prejudice at home in the Jim Crow South (though they had to pass the same IQ and other aptitude tests as potential white pilot trainees) and battled the insidious Nazi Luftwaffe over the airspace of mainland Europe is proof that the more than 400 deployed Tuskegee Airmen of the 332d Fighter Group are the real heroes of World War II.

Never mind that, unlike more than 1200 white Army Air Force pilots in World War II, not one Tuskegee Airmen earned the honorific of “ace” (five or more confirmed enemy kills). Never mind that the myth of “never losing a bomber” that they escorted was finally discredited after it had been propagated via HBO’s 1995  film The Tuskegee Airmen and President George W. Bush had awarded the Congressional Gold Medal to the Tuskegee Airmen in 2007. What matters is that these Tuskegee Airmen battled the combined forces of Nazism and Jim Crow-ism, striking the idea of white supremacy a deathblow in the process.

And never mind that, of those currently flying in the US Military, less than two percent are Black (segregated flying units did allow black pilots and commanders to emerge, but with integration the high standards of flight excellence have proved too difficult for most black pilot school trainees). We must continue to honor the story of the Tuskegee Airmen as one of the primary foundational myths of this new, more inclusive civilization that America has become.

by Dr. Daniel L. Haulman , Chief, Organizational History Division, at the Air Force Historical Research Agency, who was able to debunk some of the myths promulgated by Hollywood.)

After all, wasn’t it Barack Obama’s own Interior Secretary who bemoaned the overwhelming whiteness of the National Register of Historic Places, in light of our booming Hispanic population, not to mention the sorely neglected Black population?

With the nation’s Latino population booming and now the country’s largest minority group, the Obama administration’s top Hispanic official is concerned that the federal government is not giving enough attention to Hispanic history and culture.

Interior Secretary Ken Salazar in the past year has pushed the National Park Service to identify more sites or properties related to the histories of women and minorities that could be added to the National Register of Historic Places or be preserved as national parks or historic landmarks.

“Less than 3 percent of all the national landmarks that we have — the highest designation you can receive as a historic landmark — are designated for women, Latinos, African Americans or other members of minority groups,” Salazar said in a meeting with reporters last week. “That tells you that the score is not even.”

(For an example of this national landmark revisionism in action in California’s Muir Woods, see here).

So that old civilization, to which many people still pledge allegiance, has more than 97 percent of its national landmarks designated to white males (the majority of whom are of the dreaded Dead White Male variety)?

Hard to believe Americans were so intolerant as to exclude non-whites from contributing to the building of this great nation.

Hence the need for new myths, like that of Martin Luther King, Rosa Parks, or the Tuskegee Airmen.

And a man of Lucas’ intelligence understands that history will judge him by his contributions to this new civilization.

Now you see why street after street across this nation is renamed for Martin Luther King or the Tuskegee Airmen, a constant visual reminder of our new heroes. Now you understand why elementary, middle, and high school’s across America are having the dead white male adorning the name of the school removed to make way for an individual more in line with contemporary adoration.

In a recent New York Times interview with Bryan Curtis [George Lucas is Ready To Roll the Credits, January 17, 2012], Lucas gave his reasons for making the movie:

“They say, Now, who are you making this for?”

“I’m making it for black teenagers.”

“And you’re doing it as a throwback movie? You’re not going to do it as a hip, happening-now, music-video kind of movie?”

“No, that’s not a smart thing to do. There’s not really going to be a lot of swearing in it. There’s probably not going to be a huge amount of blood in it. Nobody’s head’s going to get blown off.”

. Indeed, it was this movie, largely a work of pure fiction, that propelled the story of the segregated Black flying unit that “never lost a bomber” to the stratosphere of the elite mindset in America that is always on the prowl for the best form of entertainment that induces the greatest amount of white guilt.

The Hollywood-ization of the “Tuskegee Airmen” means that the other historical airmen—essentially all of whom were white—who really carried the brunt of World War II, battling the Germans and Japanese in legendary dogfights, are to be overshadowed.

Their civilization, where 97 percent of national landmarks celebrated dead white males, is being largely supplanted. And their descendants are losing the right to celebrate their own history.

Lucas is a student of Campbell; he knows the power of myths.

The Tuskegee Airmen story is just that: a myth. But it has put a Black face on that “very old story” of the hero, and a powerfully new Politically Correct spin.