One of the earliest campaign medals the US ever issued was the Civil War Medal. Originally the ribbon was to be red, white and blue (the colors of both sides)  but it was changed to blue and gray for obvious reasons. (There actually is a pattern to using the colors of "the enemy" on campaign ribbons, although here both sides were American.)

Interestingly, veterans of both sides were entitled to the medal. The designs of the medals themselves were also chosen to be as neutral as possible: The Army version shows Lincoln with the words "WITH MALICE TOWARD NONE WITH CHARITY FOR ALL," and the Navy version, even more neutral, shows the Monitor fighting the Merrimac.

The Pentagon's Office of Military Heraldry put it this way:

The Civil War Campaign Badge was designed by Mr. F. D. Millett, a prominent American Artist, and the Chief of Staff, U.S. Army, approved the design and authorized the manufacture of the badge in 1906. The initial contract with a commercial firm was canceled and the design turned over to the U.S. Mint in Philadelphia for manufacture. The initial ribbon design was two bands of red, white, and blue with the red on the outside and the blue bands separated by a thin white stripe in the center. The head of Lincoln was selected because it was the only thing that could be used on the medal without offense to the sentiment then happily prevailing over the whole country in regard to the Civil War. The portrait of Lincoln must be acceptable to everybody, particularly when accompanied by the noble phrase from his second inaugural address which so tersely and accurately expresses his attitude during the war. The ribbon was changed in 1913 to half blue (on the left) and half gray.

A fellow member of a flag group I belonged to once told the story about how his father, who owned a military supply store in the Hampton Roads area, arranged to have medals awarded to the last Confederate veterans at their last reunion, sometime in the 1940's I think. They had never known they were even entitled to the medals, and had tears in their eyes when they were pinned on.

There are no veterans left, of course, but the practice remains: Campaign streamers on the US Army flag are the colors of the campaign medal (if there is one). The Civil War streamers, of course, are blue and gray. Generally, the blue is on top, but if the unit flying the flag fought for the Confederate side—and there are still units within the US military which did, mostly National Guard units—then they fly the streamer with the grey on top. In addition, the name of the battle on the streamer is changed if the South had a different name for it—Manassas instead of Bull Run and so on.

Once again, from the Army's Military Heraldry office:

Don't tell these fanatics this, or they'll destroy that too.

(I suppose this is of a piece with the fake outrage of last week, when it was discovered that German POWs are buried in US military cemeteries with German insignia. Noooo!)

James Fulford writes: I've been looking up online, and I have difficulty being sure that the Civil War Medal was meant to be awarded to people who served in the armies of the late Confederacy. Some sources say it was, some say it wasn't. However, it remains clear that in the years after the Civil War, white Americans reconciled with each other.

President Truman met with the 99-year-old head of the United Confederate Veterans in the White House in June, 1945. 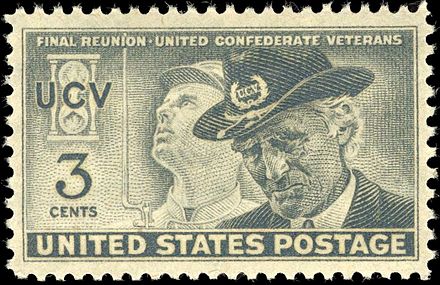 The US government issued the stamp at right in 1951 in honor of the last reunion of actual Confederate veterans. FDR praised Robert E. Lee, and President Eisenhower kept Lee's portrait in the White House.

The hate is being promoted by people who don't have America's best interests at heart.