This Day In VDARE.com History: Texas—Mexican Woman Is Sentenced to 8 Years for Voter Fraud 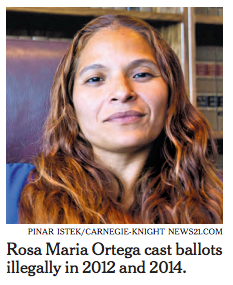 Rosa Maria Ortega’s mug should be made into a poster warning about voter fraud and plastered near every polling place in America. There’s nothing like hard time in the big house to show a government’s seriousness about a crime — and voter fraud needs to be prioritized, particularly when the perp is a moocher illegal alien. Mexicans do not have America’s best interests at heart.

Details about the case show the Mexican has been comfortable as a liar: Ortega checked a box on her driver’s license form showing she was not a US citizen, but she indicated on a voter application that she was an American citizen and eligible to vote.

Sweet that she got a nice long sentence. A few more cases like that and word will get out that there is a new sheriff in Washington DC.

A Mexican citizen living in Texas was sentenced this week to eight years in prison for voting illegally in elections in 2012 and 2014.

Rosa Maria Ortega, 37, was found guilty Wednesday on two counts of illegal voting after she falsely claimed to be a United States citizen and voted at least five times between 2012 and 2014.

A jury sentenced her Thursday to eight years in prison and a $5,000 fine.

The Dallas News reported Ortega voted in the November 2012 election and May 2014 GOP primary runoff in Dallas County.

According to Fox 4 News, Ortega’s identity came into question after she tried to register to vote twice in Tarrant County. Both applications were denied.

She had voted in five elections in Dallas before her registration was canceled in April 2015.Texas Attorney General Ken Paxton – for whom Ortega voted in 2014 – assisted in the prosecution.

“This case shows how serious Texas is about keeping its elections secure, and the outcome sends a message that violators of the state’s election law will be prosecuted to the fullest,” he said.

According to the New York Times, Ortega was born in Monterrey, Mexico and brought to the U.S. by her mother as an infant. More than a decade later, her mother was deported and Ortega became a permanent resident.

“My mom just used us to get stamps. She never gave us love or guidance. She got deported,” she said, according to Fox 4. “All my life since I worked, I always on my knowledge thought I was a U.S. citizen because I never knew the difference of U.S. citizen and U.S. resident. And the point is if I knew, everything would’ve been the correct way.”

The Dallas News reported that prosecutors showed that Ortega has checked a box on her driver’s license form indicating she was not a citizen.

However, the Dallas County election administrator said Ortega had filled out a voter application and checked that she was a citizen in 2015.

Voter fraud became a hot topic after President Trump made an unsubstantiated claim that he would have won the popular vote if millions had not voted illegally.

In addition to the long prison sentence, Ortega is likely to be deported, her lawyer Clark Birdsall said.

“She’ll do eight years in a Texas prison,” he told the Times. “And then she’ll be deported, and wake up blinking and scratching in a country she doesn’t know.”