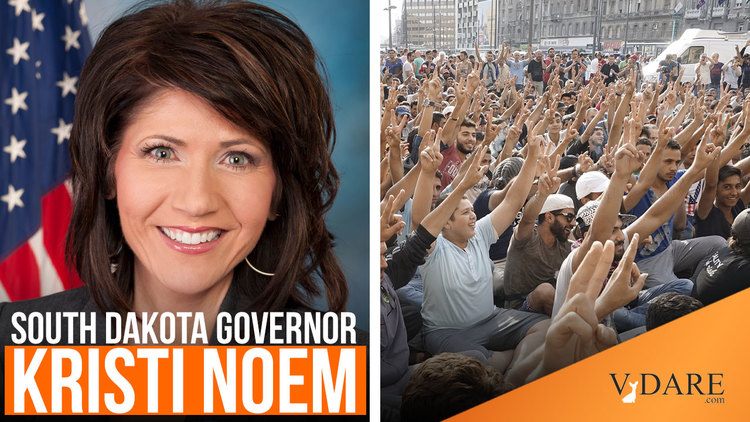 Tucker: “So you’re saying the NCAA threatened you & you don’t think you can win that fight...so you’re caving to the NCAA.”pic.twitter.com/h3lm8L6bjw

VDARE.com editor Peter Brimelow emailed Ann Corcoran of Refugee Resettlement Watch to say "Ann, am i right that you think Noem is no good on refugees either?"

Trump made an attempt to give governors and county governments a say in whether their state would accept refugees.

It wasn't the greatest plan, but it did do one thing and that was it smoked out Republican governors.  Only one governor vocally backed the President and that was Abbott of Texas.  Almost all Rs including Noem said, no thanks, the feds could still pick the resettlement sites [Noem decides to let refugees into South Dakota next year; Here’s what that will look like, by Michael Geheren, KELOLAND.com, December 20, 2019].

For the record Kemp and Desantis remained silent as the deadline had not been reached.  They lucked-out because the contractors killed the whole plan in the courts before they were forced on the record.

And, in 2016, when I traveled around the country I met people in South Dakota angry over Somali labor for meatpacking plants (LOL! Obviously Somalis were not in pork plants! but beef and poultry).  The South Dakotans I met with thought Noem, a then Congresswoman, a light weight.

Previously from VDARE.com on on GOP Governors, including Noem, who insist on importing "refugees," like for example, Boulder Muslim gunman  Ahmad Al Aliwi Al-Issa.