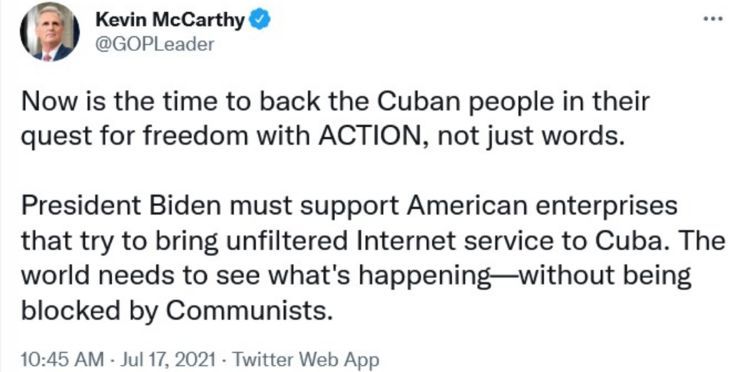 Communist Cuba’s sudden outbreak of anti-government protests, along with the chaos in Haiti, has not persuaded the Biden administration to welcome Cuban or Haitian boat people. Homeland Security chief Alejandro Mayorkas, a Cuban immigrant himself, firmly said the U.S. would not accept them. Conservatism Inc. erupted in indignation. Apparently, illegal immigration is good…so long as it’s Cuban. Forget for a moment that we have trouble with our own government’s tyranny without worrying about Cuba’s. Republicans must get the message: America First means no illegal immigration, the source regardless.

Mayorkas’ message to Cubans and Haitians was his first sensible policy decision. “The time is never right to attempt migration by sea,” he said. “Allow me to be clear: If you take to the sea, you will not come to the United States.”

The time is never right to attempt migration by sea. To those who risk their lives doing so, this risk is not worth taking. Allow me to be clear: if you take to the sea, you will not come to the United States.

Americans might be better off if someone had told Clan Mayorkas to stay put in Cuba 50 years ago. And the new policy’s glaring weakness: the Biden Regime hasn’t applied it to illegal aliens at our border with Mexico, a significant proportion of whom are now Cuban and Haitian.

Many Republicans were aghast. They claim the Cubans—and by implication, Haitians—are genuine asylees and future Republican voters [Mayorkas accused of denying Cubans, Haitians US entry because they'd 'vote against the commie bulls---', by Yael Halon, Fox News, July 14, 2021].

Biden's DHS Secretary, Alejandro Mayorkas PROVES his goal is to open the borders to illegal immigrants who are likely to vote Democrat, while slamming the door on anti-communist Cuban refugees who are likely to be future Republicans. pic.twitter.com/vxkbm3zfbO

DHS Secretary Mayorkas does not want legitimate asylum-seekers fleeing Cuba to come to the US despite his family having done just that.

Apparently he only wants people pretending to need asylum because those people will still vote for socialist Democrats! pic.twitter.com/kEWczqyG7R

This a common claim, but it needs qualifying. Cubans do vote heavily Republican (and some are large Republican donors) and they became even more Republican under President Donald Trump. In 2013, 47 percent of Cubans identified with the GOP. In 2020, the number rose to 58 percent [Most Cuban American voters identify as Republican in 2020, by Jens Miguel Krogstad, Pew Research Center, October 2, 2020]. In 2016, Trump won 54 percent of Cuban Floridians. In 2020, he won 62 percent [New poll shows Cuban-American voters align with GOP, by Gary Fineout, Politico, March 16, 2021].

The Con Inc. assumption: every Cuban immigrant will vote like those already here. But that’s not always the case. The Mariel Boatlift did not offload tens of thousands of conservatives. Instead, it deposited a bunch of criminals and undesirables. That disaster helped turn 1980s Miami into a crime-ridden hellhole, dumped thousands of unwanted “migrants” into the Heartland, and hurt the wages of American workers.

And even if Cuban refugees or immigrants vote Republican, they still take American jobs and burden taxpayers. (Beyond that, they can’t become voters for years, which delays any positive electoral effect.)

As for Haitians’ voting for the GOP, while solid data is not easily available because many identify as “African-American,” they are a rock-solid Democrat demographic. In 2020, areas of Miami associated with Haitians overwhelmingly voted for Joe Biden—68 percent for Little Haiti; 74 percent for North Miami. And 89 percent of Florida’s blacks—a sizable portion of whom are Haitians—voted for Biden [Florida Exit Polls: How Different Groups Voted, The New York Times, November 3, 2020]. Haitians seem more willing to vote Republican than American blacks—they could hardly be less willing—but while Republican operatives pushed for a “Hexit” in 2020, there was little sign it occurred, [The push to get Haitians to ‘Hexit’ from Democrats, by Sabrina Rodriguez, Politico, October 31, 2020].

Haitians aren’t particularly desirable immigrants, either. They’re strongly associated with crime and violence. Gangs in Haitian neighborhoods are driving the shooting and murder rates up in Miami [Miami Gangs Are Out of Control, by Francisco Alvarado, Daily Beast, July 7, 2021]. Trump himself certainly didn’t want more Haitians in the U.S. because Haiti is one of countries he famously identified as a “s**thole.” Yet in the span of three years, apparently, Haitians have magically become Republicans! Biden, by the way, granted Haitians who live in the U.S. an extension on Temporary Protected Status in May. New arrivals from that Caribbean country could receive the same prize.

Influential elements support intervention in Cuba because its Communist regime has long been hostile to the U.S. and supports our enemies. But a look at our attempts at Regime Change in Venezuela suggests we should pass on the idea. Venezuela is also ruled by a far-Left, anti-American government. We’ve tried for years to overthrow its president, Nicolas Maduro. The only thing we’ve gotten out of it is more Venezuelan immigrants.

Nearly 6 million have fled Venezuela since Maduro took over in 2013. Many of the illegal aliens now crossing our border with Mexico are Venezuelans. January through June, border agents detained nearly 20,000. Political instability in any of these countries eventually becomes a problem for us thanks to our porous borders and lax asylum policies [Venezuela Migrants Cross US Border in Droves, The Associated Press, June 28, 2021].

Distant and recent history suggest likewise. Hundreds of thousands of Vietnamese fled to the U.S. after the communists conquered the entire country in 1975. America took in tens of thousands of Iraqis as refugees following the 2003 invasion. We’re set to take in as many as 100,000 Afghan asylum seekers after our military pulls out of the country later this year. Of course, GOP legislators are for it. [Lawmakers Rush to Help Afghans Seeking Visas for Helping the U.S., by Luke Broadwater, The New York Times, June 18, 2021].

Americans get nothing out of these interventions…except more “refugees” and immigrants we didn’t ask for. It’s what Steve Sailer has called “Invade the world/Invite the world.”

Equally important, let’s not forget the bevy of problems Americans face, from rising crime to a border crisis. Our government currently wants to persecute one-half of the population. But Republicans are still more concerned with Cuban tyranny than with what they can see in our own country.

Now is the time to back the Cuban people in their quest for freedom with ACTION, not just words.

President Biden must support American enterprises that try to bring unfiltered Internet service to Cuba. The world needs to see what's happening—without being blocked by Communists.

McCarthy should focus more on making America’s internet free again. The Biden administration is working with major tech and communications companies to spy on and censor Americans. These efforts include working with phone companies to monitor text messages for “misinformation” about the WuFlu vaccine [White House goes off on vaccine fearmongers, by Natasha Korecki and Eugene Daniels, Politico, July 12, 2021]. White House spokeswoman Jen Psaki recently said that accounts banned from one tech platform should be banned from all platforms. She also said the White House had ordered the removal of specific accounts from Facebook [Psaki urges Big Tech to unite on bans for ‘misinformation’ spreaders, by David Rutz, Fox News, July 16, 2021].

McCarthy might also remember the Regime’s drive to deny bail to the January 6 Mostly Peaceful Protesters, the exclusion of the former president from all major platforms, and the push to effectively criminalize “Hate Speech.”  On any rational reading, the Biden Regime is a far greater threat to America than Cuba!

The Cuba issue shows that the GOP Establishment still doesn’t fully understand America First. It does not mean favoring immigrants over real Americans because they, the immigrants, are anti-communists who might vote Republican. It means putting Americans first. Simple as that.

Whatever abuses occur in Cuba, our liberties—like the right to speak freely and protest peacefully—are more precious than those of any other country. Cuba is a tragic case, but it is not our problem.

And here’s another reason not to get involved. Except for China and North Korea, after the fall of the Soviet Union communist regimes have all ultimately collapsed. There’s a strong case that we needn’t interfere.

The only thing that’s guaranteed if we intervene, is that more Cubans will be here instead of where they belong.