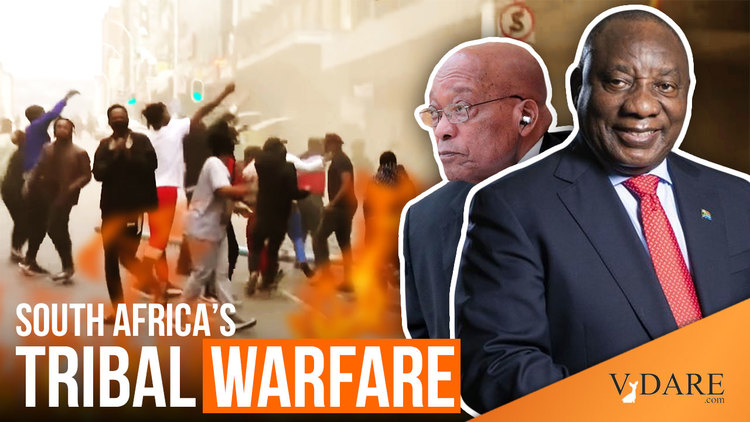 Earlier, by Steve Sailer: I Am Become Death, Destroyer Of South Africa

The U.S. corporate media is suspiciously uninterested in South Africa’s shocking unrest, although President Cyril Ramaphosa has had to send in troops and give three televised addresses in six days, actually invoking the Biden Regime’s favorite term “insurrection” [South Africa’s leaders fear fresh wave of violence by Zuma loyalists| Attacks by supporters of jailed former president ‘are bid for pardon or to unseat government’, by Jason Burke, The Guardian, July 17 2021]. Which may indeed be appropriate in this case: in telling contrast to the Mostly Peaceful Protest at the U.S,.Capitol, more than 200 people have been killed and the rioters have a clear continuing political demand. South Africa has long had underreported systemic interracial violence, but this recent outbreak appears mainly black-on-black. Moral: not only do multiracial societies not work, neither do multiethnic ones—least of all if they’re black.

Needless to say, this will be no surprise to VDARE.com readers. In in his book Ethnic Conflicts, the late Tatu Vanhanen, whose work we discussed here,  here and here, found a correlation of 0.66 between ethnic diversity and ethnic conflict, developing this hypothesis from other literature. Diverse societies fail, was the general conclusion.

South Africa was waiting to riot and loot; all it needed was a spark. That spark: inter-tribal hatred within the black population. On July 7th, South Africa’s former president, Jacob Zuma, was arrested for contempt of court. The result: the worst rioting since the end of Apartheid in 1994.

It is astonishing how little the Western media has explored this ethnic angle, beyond occasionally commenting on the fact that Zuma is a Zulu and the center of the rioting is in Zululand, also known as KwaZulu-Natal [Why Ex-Leader Zuma’s Arrest Has Cast South Africa Into Turmoil, by Michael Cohen, Bloomberg, July 13, 2021]. KwaZulu-Natal and neighboring riot-hit Gauteng are South Africa’s two most populous provinces. Gauteng contains the capital, Pretoria, and the economic hub, Johannesburg, while the significant city of Durban is located in KwaZulu-Natal.

Moreover, this country with an official unemployment rate of 33%, in which many people live in impoverished townships, has been hit hard by three waves of Covid-19 and a government lockdown. (Generally, black Africa has been a “cold spot” in the pandemic, but South Africa seems to be the exception, for reasons that would invite analysis if it were not for our Ruling Class’s endemic Race Denialism). Only about 2.5% of South Africa’s population have been vaccinated. People are continuing to get sick and die. Lacking the resources of developed countries, the lockdowns have meant that many black South Africans literally don’t have enough to eat. The lockdown has caused the economy to shrink by 7%, meaning people have taken advantage of the riots to engage in widespread looting. [What Is Happening in South Africa? Riots After President Jacob Zuma’s Arrest, by Gabriele Steinhauser, The Wall Street Journal, July 15, 2021].

But it is no coincidence that unrest, the collapse of law enforcement and widespread vigilante action to protect businesses and wealthier neighborhoods, began where it did.

Jacob Zuma was forced out of his position of leader of the African National Congress (ANC) and thus out of the presidency in the wake of disappointing election results for the ANC in 2016. However, he is a Zulu. He retains very strong support in KwaZulu-Natal and Zulus are seemingly prepared to accepted Zuma’s view that the corruption investigation is a giant conspiracy, led by his non-Zulu successor Ramaphosa.

The loathing between different South African tribes, each of whom retain their own language and culture, runs very deep. Under white rule, apartheid theorists worked to develop different “Bantustan”—effectively, ethnostates for each tribe, under overall South African control—with other areas reserved for Coloreds, Whites and Indians.

The unfashionable fact is that there was a good reason for this.

During the transition to black-majority rule in 1994, it has been argued, leading Zulus worked with the Whites to promote the interests of their own tribe over that of their “Black brothers” [The Political Origins of Zulu Violence during the 1994 democratic transition of South Africa, by Jungug Choi, Journal of International and Area Studies, 2008]. Specifically, the Zulu-leadership did not want to be part of a majority-rule South Africa that was run by Nelson Mandela, who belonged to the Xhosa tribe. This is despite the fact that the Xhosa, like the Zulu, are part of a broader super-ethnic group—the Nguni—that composes two thirds of the black population [Zulu, South African History Online, September 22, 2020].

The Zulus wanted an autonomous Zulu state within the new South Africa, campaigning for this through the Inkatha Freedom Party led by Chief Mangosuthu Buthelezi. The ANC wouldn’t grant Inkatha their wish, fearing that Whites might also demand an autonomous state. Inkatha initially boycotted the 1994 election, which swept Mandela to power, and was followed by violent rioting by Zulus [South Africa’s Violent Road to Real Democracy, by Charles Lane, The New Republic, May 2, 1994].

The ethnic group to which South Africa’s president Cyril Ramaphosa belongs is very different from the Zulu. The Venda—many people in the notorious Johannesburg satellite “township” of Soweto are Venda—see themselves as distinct from the Zulu, and from other ethnic groups, and they do not want to be merged with them.

In the assorted townships where blacks from different tribes are forced to rub along, reporters find that there is constant low-level conflict, with the ever-present potential for violence. Anti-Apartheid militants, such as Steve Biko, also attempted to create a sense of “black consciousness” in South Africa, but the country’s intense tribalism meant that they only ever had limited success [When tribalism becomes civil war, by Austil Mathebula, The Citizen, May 11, 2016].

The Western media might not be focusing on the huge importance of tribalism to these riots, but the South African media certainly are. Of course educated black South Africans seem just as desperate to play-down tribal divisions as some Western Multiculturalists are to play down ethnic ones.

“Ethnicity is complex, even within households,” writes Prof. Tshilidzi Marwala, vice-chancellor of the University of Johannesburg. “In my own house, we are Zulu-speaking, yet I am a native Venda-speaker. Having been educated in the United States and Europe, I find my Venda and South African identities very limited. To be precise, I am more African than South African and believe that the sooner we bring down the colonial borders, the better.”

He adds: “Where do we go from here as a nation? We definitely do not want a return to tribalism and false barriers that are blind to our common humanity. Once again, we are poised at a moment when our choices will determine the future of this country” [The tribe has spoken: Let’s move away from tribalism for South Africa’s sake, by Tshilidzi Marwala, Daily Maverick, July 12, 2021].

And this is simply not how many Zulus, especially, think. They are Zulu first and foremost and if they feel that one of their people is being mistreated by members of other tribes, then they will not accept it.

As post-Apartheid South Africa spirals further into poverty and chaos, perhaps they might one day achieve the separate Zululand that many of them so adamantly wanted when South Africa last degenerated into these levels of violence.