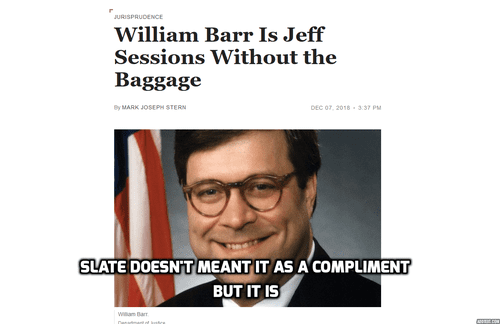 We all knew that President Trump was going to shake up the administration after the election, but what direction would he take with these changes? Will the President surround himself with more Establishment hacks, or finally let in those loyal to his agenda? The answer is not clear at the moment, but it looks like Trump may be making serious improvements in his administration.

Barr is not in the same category. A long-time Establishment apparatchik, he apparently was picked for his lack of controversy, so he could sail through the Senate. A few liberals have even praised the pick as someone who will maintain the DOJ’s independence and protect Robert Mueller’s investigation: Count me as one Democrat who thinks Trump made an excellent choice in William Barr, by Harry Litman, The Washington Post, December 7, 2018. But other liberals have are worried Barr may be another Sessions due to the law and order policies he pursued in the early 1990s.

It is true that the AG nominee cracked down on illegal immigration and made securing the border a top priority when he served under George Bush the First. He was also a supporter of mandatory minimum criminal sentencing and doesn’t now seem in favor of criminal justice reform. [Attorney general nominee William Barr will fit right in with Trump’s immigration agenda, by Dara Lind, Vox, December 7, 2018]

Hopefully, Barr lives up to liberals’ worst fears and carries on Sessions’ legacy. But it’s been a long time since he last served as AG and Washington may have changed him in the years since. Still, on the positive side, he’s a far better pick than Chris Christie, who was once considered the favorite to replace Sessions.

We’ll have to pray Barr doesn’t let the Trump base down.

Of far more concern is the dismissal of White House Chief of Staff John Kelly. Kelly is not perfect and has not been totally loyal to Trump’s agenda. He reportedly vetoed immigration hardliners like Kris Kobach for Administration posts and also was instrumental in placing the mediocre Kirstjen Nielsen as Homeland Security chief.

But otherwise on immigration, Kelly was surprisingly in sync with the President’s America First instincts. Democrats now whine that the departing Chief of Staff wanted to reduce immigration and zealously crack down on illegal migration. In early 2018, Kelly convinced Trump to stick to a hard line in negotiations over the Deferred Action for Childhood Arrivals plan and ensured the President didn’t sell out to Democrats. [John Kelly: Immigration 'hardass', by Pamela Brown, Kevin Liptak, Jamie Gangel, Tal Kopan and Lauren Fox, CNN, January 18, 2018] In May, he gave an interview to NPR where he argued most immigrants aren’t easy to assimilate and don’t have the skills our country needs. [What John Kelly really means when he says immigrants don’t “assimilate”, by Zack Beauchamp, Vox, May 11, 2018]

Trumpists hope Kelly is replaced by a loyalist. It’s not clear who it will be yet, but the good news is that it will definitely not be last week’s frontrunner--Mike Pence’s departing chief of staff Nick Ayers [Nick Ayers is Trump's next chief of staff — unless his enemies can stop him, by Nancy Cook, Andrew Restuccia, and Gabby Orr, Politico, December 7, 2018]. Ayers is a Republican Establishmentarian par excellence, working for such squishes as former Minnesota governor Tim Pawlenty and outgoing Illinois governor Bruce Rauner. Ayers is tight with Koch World and was seen by some sources as a Koch pawn in the White House [Trump feud with Koch network exposes rift between populist forces and establishment GOP, by Robert Costa and Sean Sullivan, The Washington Post, July 31, 2018].

Sources tell the Watcher that Ayers is terrible on immigration and shares the Business Uber Alles view on the issue. Fortunately, he has announced he was leaving the White House by the end of the year.

The new frontrunner: House Freedom Caucus chair Mark Meadows, a much better option than Ayers. [Scoop: Trump considering Mark Meadows for chief of staff, by Jonathan Swan, Axios, December 9, 2010] Meadows is a proven Trump loyalist who shares many of the president’s instincts. He’s at least fairly good on immigration, although it has not been a priority with him, earning a B+ grade from NumbersUSA., and he took a hard line in immigration negotiations over the summer. [‘I thought you were my friend’: Immigration meltdown exposes GOP hostilities, by Rachel Bade, Politico, June 27, 2018]

Meadows at Chief of Staff would likely encourage Trump to stick to his guns on immigration and not cave into Democrat pressure. He would also be a good wartime consigliere for a President set to face dozens of Democrat-led investigations and the climax of the Robert Mueller investigation. Immigration patriots should breathe a sigh of relief if Meadows gets the job.

And one upside to Kelly’s departing: it increases the chances of Nielsen getting the boot at DHS. Trump has loved to single out Nielsen for criticism over the lack of progress at the border and increasing levels of illegal immigrants entering the country. Prior to becoming DHS chief, Nielsen had a record as an immigration booster who thought restriction was uncouth. [Immigration Reformers on Trump’s DHS Pick: ‘We Did Not Elect a Bush, We Specifically Rejected the Bush Dynasty’, by John Binder, Breitbart, October 17, 2017] As DHS chief, she has floundered in advance the President’s agenda, much to the commander in chief’s chagrin.

With Kelly out, Trump now has less opposition to replacing Nielsen with a true immigration patriot. Her replacement will probably be much better. Kris Kobach would be terrific, and so would Rep. Lou Barletta and former ICE chief Thomas Homan. [Trump is preparing to remove Kirstjen Nielsen as Homeland Security secretary, aides say, by Nick Miroff, Josh Dawsey and Philip Rucker, The Washington Post, November 12, 2018]

The other personnel change last week was actually an improvement: Heather Nauert is the new UN ambassador, and she is clearly better than Nikki Haley.

Unlike Haley, Nauert doesn’t have aspirations to be president and doesn’t have a political base of her own. Haley used her position to promote herself and her own Conservatism Inc. agenda, regardless of whether it conformed to the President’s wishes. For instance, Haley wanted the US to stay in the UN’s global immigration pact but was, fortunately, overruled by the President. [Trump Ignores Nikki Haley, Pulls U.S. Out Of Global Immigration Pact, by Carlos Ballesetros, Newsweek, December 3, 2017] She also was happy to criticize the president publicly, something that irritated Trump greatly. [Nikki Haley is a GOP rising star. But some don’t like her stealing Trump’s spotlight, by Anita Kumar, McClatchy DC, September 24, 2018]

It’s highly doubtful that Nauert will be another Haley. She will be more likely to follow Trump’s directives on immigration and not exploit her position to criticize her boss. Immigration patriots should be relieved that Trump’s agenda will be better represented on the world stage with Haley gone and her replacement lacking Never Trump credentials.

The other possible shake-up is far-fetched and unlikely to happen. Vanity Fair’s Gabriel Sherman reported recently that the White House is considering replacing Mike Pence for 2020. The most likely replacement, according to Sherman, is none other than Nikki Haley. [“They’re Beginning To Think About Whether Mike Pence Should Be Running Again”: As The Mueller Fire Nears, Trump Ponders Jettisoning His Loyal V.P., December 5, 2018]

However, we should doubt this story. Sherman is notoriously unreliable in his reporting on the White House and aims for stories that are guaranteed to gain massive coverage but lack serious sourcing.

There is also the question as to exactly why Trump would replace Pence. Pence has been remarkably loyal to Trump since taking office and he shores up evangelical support for the President. Haley is not a serious replacement candidate—Trump knows she’s disloyal and anyway she has the same base as Pence. She brings nothing new to the table besides disloyalty.

Indeed, there isn’t any clear replacement to Pence that would help Trump with demographics he struggles with, i.e. suburban voters and women. It also makes no sense for Trump to replace Pence when he is set to promote his VP’s top aide to chief of staff. My guess: barring some unforeseen circumstance, Trump will stick with Pence for 2020.

Personnel has always been one of the major problems of the Trump presidency, yet these new changes show there may be improvement in the White House. Barr may end up being another Sessions and Meadows would probably be better than John Kelly.

It’s critical the new AG and whoever the new Chief of Staff is do as much as they can to push patriotic immigration reform.  We can’t afford for the president to be convinced by new staffers that Amnesty is the only way he can win re-election.