One of the most significant breakthroughs in understanding race differences in criminality, illegitimacy rates, unemployment, socioeconomic status etc. was quietly made a few years ago by Italian-trained evolutionary anthropologist Davide Piffer. He demonstrated—drawing on publicly available GWAS (Genome-Wide Association Study) data—that there are national differences in the prevalence of alleles associated with high intelligence and that these correlate at 0.9 (almost perfectly) with national differences in IQ. Unsurprisingly to those of us who know that science is now entering a new Dark Age, Piffer had a lot of trouble publishing this ground-breaking finding in an academic journal. Recently, Piffer replicated the finding with the latest GWAS data. But if University of Texas behavioral geneticist Kathryn Paige Harden, the mediagenic author of the just-published book The Genetic Lottery has her way, he’ll have trouble doing this ever again.

Piffer has now thoroughly proven that race differences in intelligence, and thus its correlates such as criminality, are at least partly for genetic reasons. You would think that Paige Harden would be thrilled about this breakthrough. But she is an extreme “Bravery Signaler”—she wants to find a niche as a courageous free-thinker without going too far and being “cancelled.” (I would put Bell Curve co-author Charles Murray in the same category). So she not only dogmatically ignores Piffer’s research but wants to stop independent scholars like him, who are not affiliated to universities, being able to conduct it at all. After all, Piffer, who is not afraid of being cancelled, could use these public data to present the truth in a way that the politic Harden dare not. It’s embarrassing. The solution: Stop people like him from analyzing or even accessing these “public” data!

Emil Kirkegaard, Piffer’s colleague on the truly “open science” journal Open Psychology—no subscription charges, no publication fee (a barrier for independent scholars who lack institutional support) and open peer-review which everyone can read—has some scathing commentary about Paige Harden in his blog Thou shalt not look at polygenic scores,” [September 16, 2021]. The Danish independent scholar notes that “open science”—including the principle of sharing your data—was introduced to make science more transparent and as an insurance measure against the problem of scientific fraud. Other “open science” innovations include “preprints,” where you can publish your results before they have undergone the often snail-pace process of peer-review—a corrupt system which weeds out anti-Woke science as much as it does poor research.

The difficulty of data being publicly available: independent scholars—not constrained by a university that enforces Woke ideology –might analyze these data and present results even if ideologues might find them unpalatable, as we see with the work of Davide Piffer.

In a 2019 tweet, Paige Harden highlighted this, from her semi-Woke perspective, problem:

Now, obviously, the terms “pseudo-scientist” and “eugenicist” are examples of are what is known as the fallacy of “appeal to insult.” They imply that whoever is deploying them has their own ideological agenda—ironically suggesting that it is the deployer who is, to use Paige Harden’s own term, the “pseudo-scientist.”

Similarly, “eugenicist” appears to mean, “someone whose scientific results cast doubt on Woke dogmas, such as race differences intelligence being entirely a matter of environment.” Environmentalism, by the way, is Paige Harden’s professed view, although I doubt she or anyone who espouses it can possibly believe it, especially in the light of Piffer’s findings.

Kirkegaard reports that the indirect result of pressure exerted by people like Harden has been the shutting down of “open science.”

New sets of GWAS results are published every year and, as Kirkegaard explains, every single year Piffer’s findings have been replicated. There is a “replication crisis” in social science but not, it seems, when it comes to the evidence for race differences in IQ being partly genetic in origin.

Now, however, due to pressure by Harden and her kind, if you want to download the new GWAS results and analyze them yourself, then—unlike in previous years—there’s a login page for which you need a university email address. So you have to be part of the “guild” —or connected to a sympathetic member of it—in order to access these data.

And in fact, of course, as the furor over the London Conference on Intelligence in 2018 showed, there are still many “truth sympathizers” working undercover at universities.

However, the Woke Enforcers have anticipated this problem. So, there is a further hoop through which you must jump: ideological assent. You must assent to the following in order to download these data:

I agree to conduct research that strictly adheres to the principles articulated by the American Society of Human Genetics (ASHG) position statement: “ASHG Denounces Attempts to Link Genetics and Racial Supremacy.”(See also International Genetic Epidemiological Society Statement on Racism and Genetic Epidemiology.) In particular, I will not use these data to make comparisons across ancestral groups. [Emphasis added]Such comparisons could animate biological conceptualizations of racial superiority. In addition, such comparisons are usually scientifically confounded due to the effects of linkage disequilibrium, gene-environment correlation, gene-environment interactions, and other methodological problems.

You must further assent that:

I agree that violating any of the Terms and Conditions may result in consequences including, but not limited to, any or all of the following:

Now these may seem trivial threats. But the enforcers clearly want to intimidate people out of using their public—and taxpayer funded—data to reach conclusions that they, and Paige Harden, don’t like.

For her semi-bravery—in raising the importance of genetic differences—she is being pilloried by some Woke elements [Do genes matter? The hereditarian left wants you to act as if they do, by Anthony Skews, AnthonySkewspolitics.com, September 16, 2021], as Charles Murray (understandably grumpy because Paige Harden caricatures him as a genetic absolutist) recently Now you know what it feels like.. 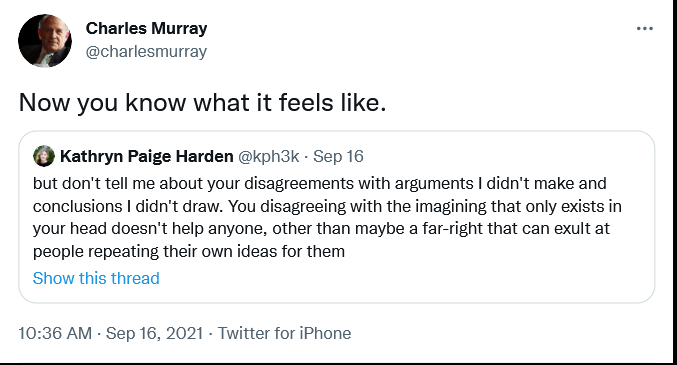 Emil Kirkegaard’s work, however, implies a more damning conclusion. Harden is an enemy of science dressed up as its “middle-aged mom who’s aged quite well” friend