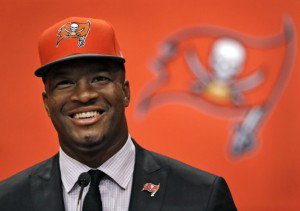 The Sports Section of the Sunday, May 10, 2015, Tampa Bay Times announced the fact that Jameis Winston(right)otherwise known as Famous Jameis, filed a lawsuit against Erica Kinsman, the white former Florida State student who was allegedly raped by Winston back in December of 2012. [Jameis Winston files counterclaim, denies he raped woman, By Matt Baker ]The lowly Tampa Bay Bucs, coached by Lovie Smith, made Winston their first pick in the NFL draft and surrounded him with an entourage of therapists, security personnel, life-style advisors, and Big Brother father figures to keep the notorious Jameis on the straight and narrow. As the franchise quarterback Winston has already taken over and told the world that greatness will triumph and the Bucs will be winners again.

What is odd about the Winston lawsuit is the sheer arrogance of an alleged perp countersuing the victim after getting a multi-million dollar contract from the Bucs.

Now only the best lawyers will defend Famous Jameis from the modest civil lawsuit filed against him after the supreme whitewash job done by Tallahassee police and FSU as they mishandled the rape case from Day #1. The State Attorney, Willie Meggs, agreed that something terrible happened to Ms. Kinsman but the evidence was in his mind insufficient.

It is nonetheless true that both the Tallahassee police and FSU did absolutely nothing to investigate the serious charges once they realized that Winston was the star football player. Kinsman herself had no idea who he was and claims she went to his apartment, was nearly unconscious from her alcoholic drink and was forced into sex with Winston. Two friends of Winston were present and one, Chris Casher, actually videotaped the sex. However, during the long delay while police and university did nothing, Mr. Casher “lost” that videotape.

Winston has a notorious reputation both for grandiose self-adulation and actual athletic prowess that won him a Heisman Trophy and a national championship. However, it is the character or lack thereof that separates Winston from most athletes. In less than two years at FSU he managed to do the following:

(1) Engage in a BB gun battle in an apartment complex with property damage,

(2) Get a citation for ripping off a Publix market by walking out with $32 worth of crab’s legs,

(4) Stand on a table before hundreds and shouted vulgarities about women, and

(5) Get charged with rape in the Kinsman case and possibly a second case which was acknowledged by a victim’s advocate at FSU.

A striking feature of Jameis is his exaggerated self-concept. Marcus Mariota, a white super star from Oregon and the #2 draft pick after Winston, is calm, reserved, and law-abiding.

He is in character far more normal than Winston. If psychopathology is more common among blacks than whites, as Richard Lynn claims [Race and Psychopathic Personality, American Renaissance magazine, July 2002] then perhaps we are looking at a charming, egocentric Winston and overlooking his obvious criminality and utter disrespect for the law and human dignity.

His handlers are busy 24/7 trying to save Lovie’s job by keeping a psychopath from devouring the hens in the chicken coop. In the NFL bad behavior comes in many forms but Winston adds the elements that only psychopaths demonstrate such as disregard for laws, refusal to accept responsibility, deceitfulness, poor impulse control, and a tendency to exploit others. Winston also has the superficial charm that many with this personality disorder exhibit.

If Richard Lynn’s claim is correct then all professional sports(except hockey) could well be housing more psychopaths than we care to admit, but the average American fan today is depraved enough to ignore such matters. Beer, pretzels, and a winning team are all that matters. Erica Kinsman may get lost in the shuffle, which would be a shame, and FSU again demonstrates its dedication to the “win at any cost” philosophy and a morally bankrupt administration.

Sports is king and stars like Winston are worshiped and protected from ordinary students including young rape victims. This guy has only been enabled in the early stages of his depraved life by authorities, including parents, who failed to blow the whistle. This is surely only the beginning.