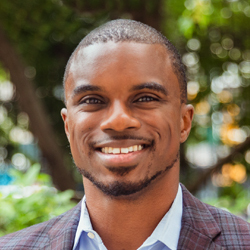 Frankly, I’m surprised it took this long. The people who hate us and our history never, never let up. Normal, well-adjusted people go about their own business, but those people don’t. The Third Reconstruction, a drive for explicitly anti-white racial socialism, is only beginning. See The United States Needs a Third Reconstruction, by Wilfred Codrington III, The Atlantic, July 20, 2020. (Wilfred Codrington III [Email him], right,  is an assistant professor at Brooklyn Law School and a fellow at the  Brennan Center for Justice.)

Easton is the county seat of Talbot County, on the eastern shore of Maryland. The busy downtown is elegant and old-fashioned, with 18th- and 19th-century buildings and a graceful brick courthouse dating from 1794. On the front lawn of the courthouse stands a simple bronze figure on a granite base. The Smithsonian website carries a good description.

A young soldier stands with a C.S.A. flag on his left side, holding it with both hands. The flag curls behind him, covering his back. He wears a broad-brimmed hat and an open shirt. The youth is meant to represent youthful courage and enthusiasm as portrayed in Longfellow's poem "Excelsior." The statue is mounted atop an inscribed pedestal, which is atop a base with plaques. A brass box containing the names of contributors was placed in the base. 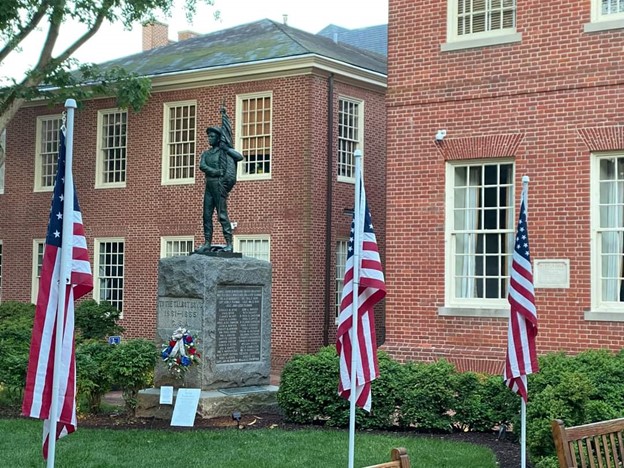 In 2011, the council voted 3-to-2 to place a similar-sized statue of Frederick Douglass in a symmetrical location on the other side of the front walkway. Opponents of the Douglass statue objected that the courthouse lawn was a place to honor veterans, not political activists of any stripe; but of course they were smeared as racists. The tacit hope was that honoring a Negro would placate the few malcontents who equated the Confederate cause with white supremacism. In recent years, a group of naïve civic nationalists put considerable effort into promoting the construction of a “Union Talbot Boys” statue to foster “reconciliation.” The council brushed them off.

All such hopes were predictably misplaced; over the last several years, the $PLC and other groups have made hit lists of Confederate monuments, and glossy magazines have featured calls for their removal. A piece in Architectural Digest by someone named Laura Itzkowitz [Tweet her] is typical of the genre [What Should Happen to Confederate Statues in the U.S., June 24, 2020]. (The preponderance of Jews in this effort is a matter of anthropological interest. It is remarkable that people whose ancestors were not even in this country during the War of Northern Aggression should bear such hatred toward the losing side.)

On September 14, 2021, the Talbot County council voted 3-to-2 to remove the Talbot Boys monument and relocate it at private expense to the Cross Keys Battlefield in Harrisonburg, Virginia. Wealthy donors are apparently operating in the shadows here, as in the strange case of the Bad Boulder on the campus of the University of Wisconsin. Mulatto Republican Corey Pack and fake Republican Frank Divilio voted with the one Democrat on the council. Pack claimed that the death of George Floyd changed his mind. Divilio caved to pressure by anti-Confederate jihadists with the usual sorry blather:

"The Talbot Boys issue has divided our community for too long, and has sidelined many other important things that the county council and county government needs to address," Divilio said. "County services have suffered because of this debate and the toll that it has taken on county residents, businesses and county staff."

Demonstrators for and against the monument waved signs and exchanged words in front of the courthouse on the evening of the vote. The crowd was apparently polite except for an anti-statue activist and recent transplant from the north, Rabbi Peter Hyman [Email him], who distinguished himself by crudely reviling a small group of women, one of whom reported on Facebook (with an accompanying video):

He stormed across the street and immediately called us 3 women f**ing racists, idiots, and assholes. I honestly felt like he would strike us at any moment. The gentleman in the blue intervened on our behalf, and the coward rabbi immediately stormed away. 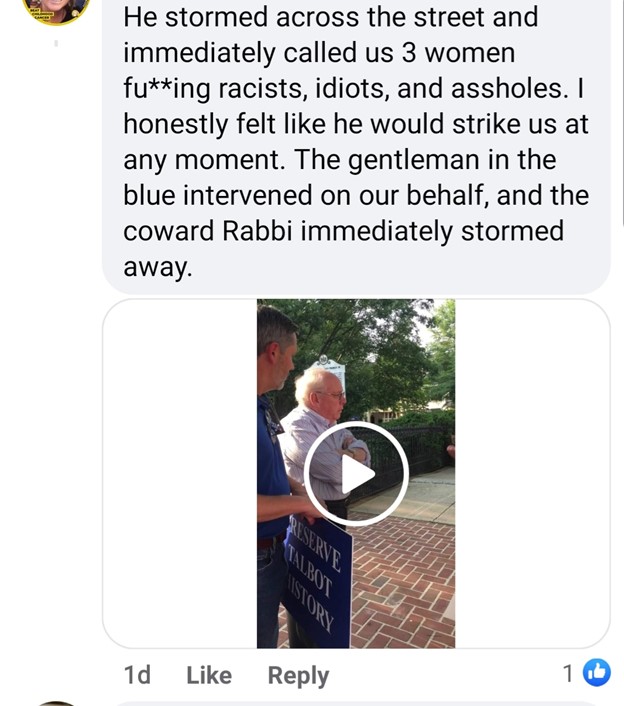 This carpetbagger talks a good game, but he evidently has the same notion of “openness and inclusion” and “dialogue” as all the rest of the wokesters. He presides over Temple B’nai Israel, a recently constructed modernist eyesore south of town.

It is ironic that the vote took place just two days after Defenders’ Day, when Marylanders used to celebrate the repulse of the British assault on Baltimore in 1814. The young men from Talbot who joined the Confederate army were responding to a similar but, alas, successful invasion of their home state in April of 1861 by the U.S. government.

During Lincoln’s occupation of Maryland, blue-coated troops regularly harassed passers-by in Easton and forced them to salute the flag in front of that same courthouse. My great-great grandfather, Judge Samuel Beale Merrick, refused to go into town for the duration of the war because of the indignities inflicted on him and other citizens by the Yankees. 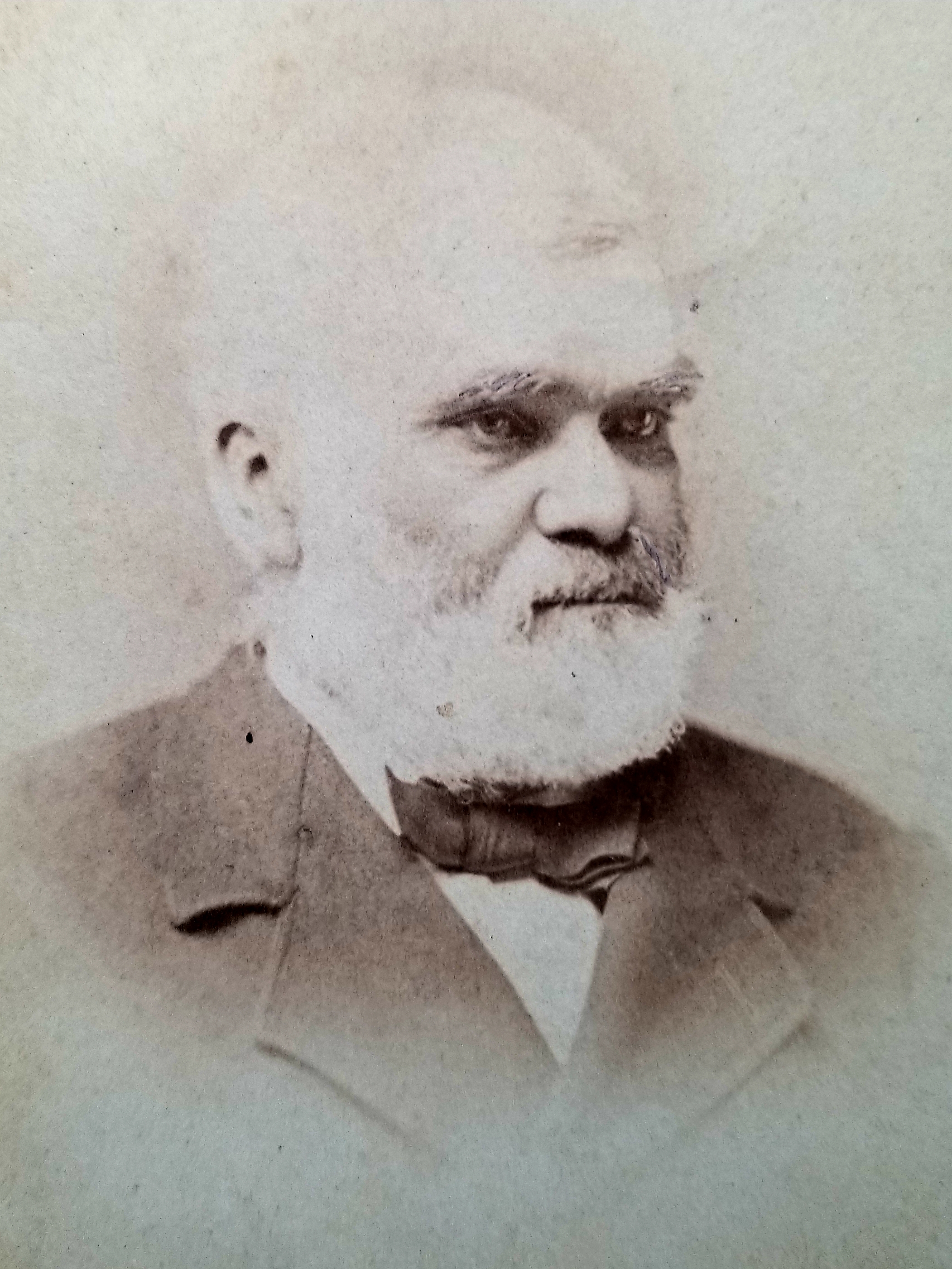 Worse than indignity was the treatment of Judge Richard Bennett Carmichael. Federal troops surrounded the Easton courthouse and beat him unconscious with a pistol in his own courtroom in May of 1862. They dragged him out and locked him up in Fort McHenry for six months on “suspicion of southern sympathies.” He had courageously supported the writ of habeas corpus against Lincoln’s orders.

Although the citizens of Talbot had voted against secession in 1861, the despot’s heel crushed them for four years.

Now Maryland is once again under hostile occupation. This time, it appears that the duration will be much longer.

Dr. Cockey is a native Marylander with deep ancestry on the Eastern Shore. His 9-greats-grandfather Edward Lloyd I  was among the early settlers and leaders of the Maryland colony.